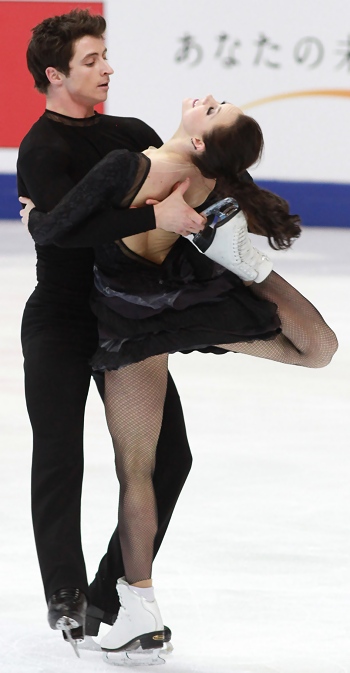 As expected the reigning Olympic champions Tessa Virtue and Scott Moir of Canada won the fourth event of the ISU Grand Prix Figure Skating series. Russia’s Elena Ilinykh and Nikita Katsalapov overcame a fall early in the program to capture the silver, while teammates Viktoria Sinitsina and Ruslan Zhiganshin won the bronze.

Virtue and Moir’s performance to Carmen Suite by Rodion Shchedrin was the highlight of the second competitive day in Moscow. In a drastic departure from their lyrical style, the Canadian skaters produced an intensely powerful dance which brings the overused tunes back to its ‘gypsy’ roots. The ice dancers admit, however, that they had some reservations about their choice of music.

“Tessa had been quoted saying that ‘I will never skate to Carmen in my career’ within the last couple of years,” said a dead-panned Moir at the press conference. “However, Marina (Zueva) had been trying to persuade us to do it for a long time. Originally, we wanted to use “Carmen” as the short dance. When we got feedback from people at the ISU, who said that our ideas for the polka were not acceptable in their minds, we had to change the plan.”

“We knew that we wanted to do something different, try to do something different with the music,” continued the 25-year-old. “Obviously, there were some great “Carmen’s” in the past, and it was a bit of a worry [that it would be one of many], but we are very happy with how it turned out. We hope that it will be a bit different from the other “Carmen’s”. Things are good so far, and we will see how it will turn out, but it has definitely crossed our minds that we were taking risks with this music choice.”

In their second competition of the season, the World champions earned better levels of difficulty than at Skate Canada, but their second step sequence only received level two. However, flawless execution of all elements, combined with superb choreography (for which they got two 10.0 marks) and interpretation of the theme (a 10.0 from one of the judges), put them in first by a considerable margin.

“It was a really strong skate for us,” stated Moir. “We are really happy with how we started the season so far. In our first two competitions we have learned a lot, and we are looking forward to improving on that in the three-week time we have until the Grand Prix Final. We will be happy to be back in Russia and to skate for the first time at the Olympic venue. We are looking forward to coming back and presenting improved versions of our dances.”

The Canadian champions’ preparation for the season was affected by the fact that their long term coaches Igor Shpilband and Marina Zoueva parted ways. According to Virtue, it was a shock, but they believe in the end, it was all for the better.

“Obviously, it was extremely sad,” said the 23-year-old. “The circumstances were not ideal, and when you have such a great partnership, it is sad to see it end. But we had so much fun this summer training with Oleg Epstein, and also with Maurizio Margaglio. I think we have such a great team, the people that are around us now.”

“In fact, I just told Oleg a couple of weeks ago that he makes me like skating even more,” shared Virtue. “He brings so much passion, energy, and enthusiasm every single day, that it’s hard not to respond with equal energy. It’s nice to have a bit of a change. It’s easy to settle into something that is really comfortable, and we have been there for 8 or almost 9 years. Sometimes a bit of change of scenery is good. It really worked out well for us.”

Ilinykh, 18, and Katsalapov, 21, had to overcome a shaky start to deliver their free dance to the music from the musical The Ghost. The team had been going through their opening transitional moves, setting the scene for their story, when Ilinykh stumbled and fell, nearly taking her partner with her. The 2012 European bronze medalists were able to get right back into the choreography, however, and earned good levels of difficulty (only one of the lifts was rated level two) to finish second in the free with 92.76 (44.45/49.31) points and overall (158.46).

“We were a bit more nervous today than yesterday,” admitted Katsalapov, “but I do not believe that it has affected anything. It’s normal to be a bit nervous during a competition. Other than that fall in the beginning, it was an easy and comfortable skate for us.”

“I am not a technical specialist,” he added, “but I think we did well. We were able to skate like we do in practices, and it was good for this point of the season. It gives us something to work on for a week until the Grand Prix event in Japan. We will definitely clean up both the short and the free dances a lot.”

The cuts the ice dancers use from The Ghost include several lines of dialogue. Some felt it was inappropriate, but the team stands by their choice.

“It is a great story and it appealed to us a lot,” explained Ilinykh. “We saw the musical on Broadway and we liked it very much. We are happy with the way our coach arranged the music. I think the dialogues help to make a whole story, almost a mini movie.”

The Russian silver medalists debuted their programs at the Crystal Skate in Romania last week, and earned scores comparable to what Virtue and Moir received in Moscow. When challenged about this fact, the team explained:

“It was a different tournament, with a weaker field than here,” said Ilinykh. “For scores, you really have to ask judges. They were the ones who awarded them. We skated well, but our goal for the tournament was to skate our programs in front of the audience and the judges. We had no chance to do it before, because we had to withdraw from the national team’s test skates. We paid no attention to the marks. We got good levels and we were happy with it. I think those performances helped us a lot today.”

Sinitsina, 17, and Zhiganshin, 20, won the bronze despite finishing only fourth in the free dance. The World Junior champions looked comfortable and confident while performing a tango to Spiagge Lontane, however, they lacked the intensity of the higher ranked teams. They also faltered at the very end of the performance. Their rotational lift only received level one, and they fell out of their last choreographic lift.

“It was great to skate here today,” said Zhiganshin. “We did not expect to be in the top three. It was a fantastic experience for us to skate in the same warm up group with such strong skaters. We would like to thank the audience for their support, it helped us a lot. As for the mistakes in the end, I think we were getting too tired. Overall, it was good, though.”

The students of Svetlana Alexeeva and Elena Kustarova displayed noticeably more confidence than they had in Shanghai a week ago.

“We skated at home today,” explained Sinitsina. “We enjoyed better support and it was easier to skate here. Besides, last week was our debut on the Senior scene, our first taste of it, so to say. Now we know how it feels, that there is nothing to be afraid of. We had nothing to lose, so we decided to simply enjoy our performance.”

For Zhiganshin, the event has a special meaning: For the first time in his career, he competed against his elder sister, Nelli, who represents Germany with Alexander Gazsi. Ironically, it was the Germans that beat the young duo in the free.

“I am happy that I had this chance to compete against her,” said Zhiganshin. “After the end of the competition, she came to the dressing room and told me that it’s a draw since I won the short dance and she won the long.”

The off-beat and theatrical performance by the German team appealed to the Russian audience, however, after a poor showing in the short dance, they had to settle for the fifth place (140.54) behind USA’s Maia and Alex Shibutani (140.91).

The Americans were forced to interrupt their dance a half a minute into it.

“At the morning practice, Alex had kind of pulled a muscle in his thigh,” explained the team’s coach Maurizio Margaglio. “He seemed to have recovered, but the first element in their dance is a sit spin, and it got cramped again. He was unable to continue right away. After they talked to the referee, they were allowed to continue from the point of interruption. He decided to give it a go.”

The crowd supported the skaters throughout the remaining part of their “Memoirs of a Geisha” routine, however, the brother-and-sister team was understandably cautious, and picked up rather low levels of difficulty to finish fourth.