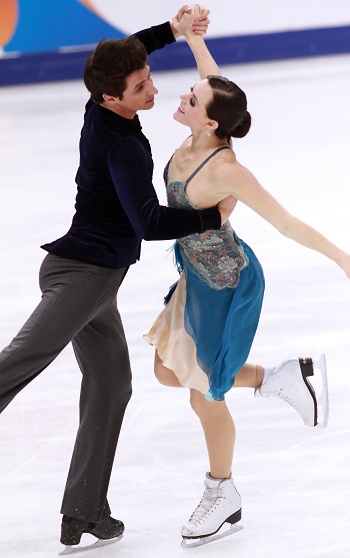 Tessa Virtue and Scott Moir of Canada perform to “The Waltz Goes On” by Anthony Hopkins at 2012 Cup of Russia.

Tessa Virtue and Scott Moir of Canada finished five points ahead of their closest rivals to win the Short Dance event at 2012 Cup of Russia in Moscow. Elena Ilinykh and Nikita Katsalapov of Russia finished second, followed by their teammates Viktoria Sinitsina and Ruslan Zhiganshin.

Virtue and Moir improved their score from 2012 Skate Canada, however, they are still nowhere near their maximum. As enchanting as their performance was; technically it left much to be desired. The Olympic champions received level four only for their twizzle sequence and rotational lift, while one of their Yankee Polka sequences received level two.

“We are very pleased with the way we skated today,” Moir said afterwards. “After Skate Canada, we had only a week and a half to train, and we did good a job. We were looking to improve our performance and we were able to do it. We skated like in training, aiming to maximize the points. Now we have three weeks before Sochi and we are looking forward to improving even more.”

The Canadian champions earned the best scores of the night, both in technical and in program components, and received 70.65 (33.15/37.50) points. One judge even awarded them two 10.0 scores for the Choreography and Timing/Interpretation of their rendition of The Waltz Goes On by Anthony Hopkins.

Putting the program together was a challenge, according to Moir, though.

“This season the process was a bit different,” explained the 25-year-old. “Basically, we had this beautiful waltz we fell in love with, and then we had to fit 36 seconds of Polka into it, because the rules say that we had to do it. But I think we have succeeded at keeping the flow of the waltz, and the Polka part did not affect the performance that much. We might not like it, but we need to get the maximum number of points.”

“We enjoy experimenting with different shapes and body lines,” added Virtue, 23. “We try to elongate our movements and hold edges longer. We also enjoy trying different styles, characters, types of movements, and time periods. We are eager to return home and develop this storyline even more.”

The skater also feels that the rules sometimes limit their creativity.

“The thing is that we are trying to be creative,” she explained. “There are lot of ways to get level four on a lift, but we want to try something interesting, both for us and for the audience. Sometimes we are forced to simplify our lifts just to get high levels. This time we did an old lift. It is quite frustrating for us, but I think in three weeks till the Grand Prix Final, we will be able to bring together our vision of this dance and requirements for levels.”

Despite being heavy favorites of the event, the team still felt quite nervous.

“I am glad some people thought that I looked calm before the competition,” said Virtue, “but is a bit like a duck. The bird glides smoothly across water and all the work is hidden. I was very nervous today. I put a lot of pressure on myself, and I knew that we had to improve compared to Skate Canada. The dance was very solid at home, so I told myself ‘take a breath, take it one step at time, it is not very long’. During the performance, I mostly looked at Scott and smiled.”

“The thing that went wrong at Skate Canada was that we did not get our usual high from competing,” added Moir. “So our goal was to turn nervous energy into an exciting performance and to give our best to Russian fans. Maybe we have even made a couple of new fans today.”

Competing at their first Grand Prix event of the season, Ilinykh and Katsalapov matched the World Champions level for level, but with lower grades of execution (GOE), as well a lower program components score (PCS). They only earned 65.70 (31.72/33.98) points, which is their new personal best by 0.19 points.

“We are glad that we are finally competing, and that our first Grand Prix event is in Moscow,” said 18-year-old Ilinykh. “We had great support today. There were a lot of positive emotions, but unfortunately the marks told us that we still have a lot of work to do. We will do it over the course of the season.”

“It gives us great pleasure to skate today,” added Katsalapov, 21. “It’s an incredible feeling to skate in front of the audience which supports you that much. Every time you do an element well, they start to applaud even louder, and it gives you that extra energy which really carries you through the dance.”

The students of Nikolai Morozov took an unusual approach to the theme, picking up an Andijan Polka originating from Uzbekistan. In order to match the requirements, the Russian silver medalists had the track recorded specifically for them.

“We wanted to make something unique,” said Katsalapov, “something no one else had ever heard of or done before. However, even though the waltz and polka are not native dances for Uzbekistan, the tunes we use are arranged to be the proper waltz and polka. We also have great Uzbek costumes, so it is a lot of fun to do this dance.”

“The reason why we had the music recorded for us was to have it meet ISU requirements,” added Ilinykh. “Local versions of the polka had slightly different rhythms. The musicians who did the recording even attended our practices and put highlights into the music to match our moves. We enjoy skating it a lot.”

Much like Gracie Gold in the Ladies Short Program, Sinitsina and Zhiganshin, who had a shaky Grand Prix debut in China last week, were completely different skaters today. Fast, smooth, and charismatic, they moved flawlessly through their combination of Tennessee Waltz and a western-style polka, and portrayed and maintained their “wild west” characters perfectly. The 2012 Junior World Champions earned the highest base value among all teams, and were the only duo to receive level four for one of Yankee Polka sequences. They scored 60.85 (31.93/28.92) points.

“We are very surprised that we finished in third place,” said Zhiganshin. “It was a much better performance than Cup of China, though, and the audience support was incredible. It helped us a lot.”

The team did not find it a challenge to compete back to back at two Grand Prix events.

“You know, it was easier for me to skate today,” said 17-year-old Sinitsina. “I did not really have time to think about it. We simply arrived from China, had a couple of practices at home, and went on to compete here.”

“I guess it helped that we knew this schedule in advance,” added Zhiganshin, 20. “We simply stayed focused after the Cup of China, knowing that we still have one more event to go.”

USA’s Maia and Alex Shibutani finished fourth with 58.26 (27.29/30.97) after getting only one level four (rotation lift) for the elements of their short dance set to music by Incantations.