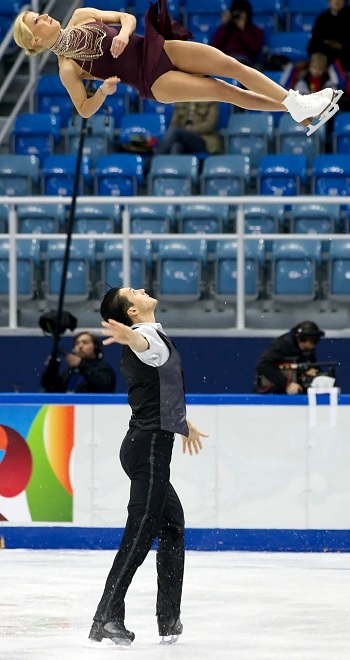 The only technical glitch in Volosozhar and Trankov’s colorful and sultry performance to Nino Rota’s The Godfather was a level two they received for their death spiral. All other non-jumping elements, including the triple twist, received a level four.

The students of Nina Mozer did not put a foot wrong during the three minutes of their program. They earned 78.69 (40.27/38.42) points for the efforts  with no program component score below 9.00 and one perfect 10.00 for their interpretation of the theme.

“It was easier at the ISU Grand Prix Final,” admitted Trankov afterwards. “Perhaps, we were simply too tired. We have been working a lot because I made mistakes at two previous events. So, we have arrived here physically exhausted, but much better prepared technically and functionally. It is great that we will have a day off tomorrow, though.”

“We had only positive thoughts before the start of the event,” added Volosozhar. “We got good marks for all our elements.”

The team plans to continue to work on strengthening them, however.

“Our death spiral is planned to be a level three,” explained Trankov, “and we still have a lot of work to do to bring it up to a level four. Other than that, though, I guess the only thing we can truly improve is interpretation. The more we skate the program, the more little details we pick up. Glances, hand gestures, and so on… they are getting better and better with each performance.”

Despite strong rivalry on the national level, the team does not find the national championships particularly special.

“Obviously for me and Tanja, it is only our second national championships together,” said Trankov. “The first one was really nerve-racking. We fought for a place on the national team, for a right to represent Russia at the World championships.”

“Today, we decided to see how we would feel, but our feelings were exactly the opposite,” he added. “We were confident because there were very few questions about our short program this season, so we just stepped on the ice and skated like we did in practice. At this competition, we focus more on the free program, so we were not nervous or agitated today.”

Having only at best a thousand of spectators in 12,000-seat venue also was not an issue for the 2012 European champions.

“We were ready for it. They told us as much yesterday,” said Trankov. “We understand the reasons behind it and we were prepared. Naturally, we would like to see more people in the stands, but it is an Olympic construction site and it makes sense that they cannot simply let everyone in and allow all people to roam freely.”

Kavaguti and Smirnov delivered the performance of the season so far, nailing most of their elements. The students of Tamara Moskvina earned a level three on their triple twist and a level two for their death spiral, but all other elements received a level four. Additionally, the final straight line step sequence worked especially well in expressing the character of their routine to Strauss’ Blue Danube, and they earned 70.19 (35.06/35.13) points.

“We are quite happy with our performance,” said Smirnov. “We are grateful to the public for their support. Now we have to focus on the long. We were not aiming at getting a season’s best. We are simply happy that we managed to deliver one of our finest performances, but there is always a room for improvement.”

Unlike the leaders, the runner-ups admitted to feeling the pressure.

“We were a bit nervous, but we are happy that we were able to overcome it,” said Smirnov. “We wanted to show a much better short program at this ice rink and we are happy that we managed to do just that. However, we see the national championships as a regular competition. We are simply happy to be competing here.”

Ksenia Stolbova and Fedor Klimov ran into trouble with their triple twist which had a flawed catch, only meriting a level one and slightly negative Grades of Execution (GOS). Their death spiral was rated a level two.

“All in good time,” said Stolbova about their progress with triple twist. “We have just started performing this element.”

“It happens sometimes,” added her partner. “We have tried to perform it another way, more technically correct, but at the moment this flawed version is going better, so this is the one we do.”

Otherwise, the 2012 European Championships bronze medalists were flawless. Unexpectedly, one of the highlights of their routine to music from Interview with a Vampire was their side-by-side triple toe loops, executed late in the program and in perfect unison. The students of Ludmila Velikova earned 67.78 (34.24/33.54) points for their elaborate routine, setting themselves apart from the rest of the field.

“We are happy. So far everything has been great,” Klimov told the press. “We have finally delivered a clean short program, something we should have done a long time ago.”

“The triple twist was not perfect, but the rest was good,” he continued. “It was also very strong emotionally. We had accumulated a lot of frustration and “sport” anger over the fact that we could not skate clean short programs in the past, and it helped us perform better today.”

The 2012 Russian silver medalists believe that the key to success is nothing more complex than having enough time to prepare.

“The Federation officials always tell us that the nationals is the most important event of the season, so we came prepared,” he joked. “We had time to prepare after our last competition [Trophée Eric Bompard in mid-November], so we skated better than usual.”

“For me, the national championships is the most difficult event,” he admitted. “The atmosphere here is very nervous, but I mostly feel it before the start of the event, and during the performance, I focus mainly on doing my best. I am only nervous between two performances.”

Vasilisa Davankova and Andrei Deputat round up the final flight for Thursday’s free skating. The team successfully executed all elements in their routine set to Evdin Marton’s arrangement of The Godfather, but they got only earned a level one for their death spiral and flying combination spin (which Davankova had to re-center upon landing). Their triple twist received a level two. The 2012-13 ISU Junior Grand Prix Final silver medalists earned 58.30 (31.32/26.98) points.

For Anastasia Martiusheva and Alexei Rogonov, the competition went better than usual, but was not perfect. Martiusheva fell out of a triple Salchow landing, but at least the 2012 Russian bronze medalist managed to rotate the jump, which has often eluded her in the past. Their triple twist received only the basic level, however. The team is a close fifth with 57.65 (28.86/28.89) for their intricate performance to “Cornish Rhapsody”.

Julia Antipova and Nodari Maisuradze finished sixth, despite missing several elements: Antipova fell after a triple toe loop, slipped off the edge during a death spiral, and later had a minor stumble during the step sequence. Still, their enthusiastic performance to the famous Kalinka showed that the newly paired team has a lot of potential. Their triple twist was among the best ones in the field and their other Pair elements were surprisingly strong for a team which has been together for less than a year. They earned 59.96 (27.71/30.25) points.

Lina Fedorova and Maxim Miroshkin are seventh (54.30) after they missed the side-by-side double Axels and once again, failed to execute the same number of rotations in their final spin.

Defending champions Vera Bazarova and Yuri Larionov withdrew from the event due to Larionov’s trouble with skating boots. A heel came off his boot during a morning practice before the 2012 ISU Grand Prix Final exhibition. There was not enough time to find and break in a new pair before the event.