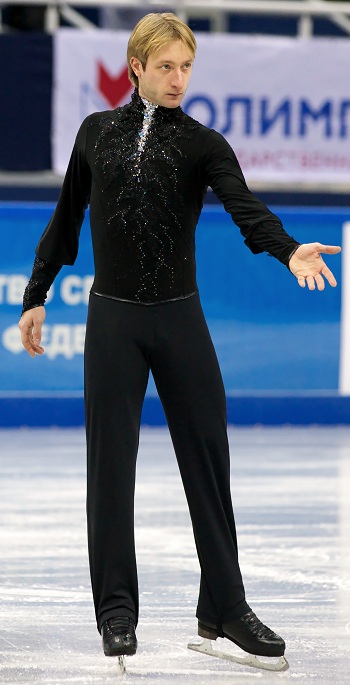 Evgeni Plushenko has taken the first step towards winning his tenth national title at the 2013 Russian National Figure Skating Championships in Sochi. He won the Men’s Short Program event by finishing four points ahead of Sergei Voronov. Maxim Kovtun is currently third.

On the paper, Plushenko’s performance does not look all that impressive: only a quad-double combination and no level four spins or step sequences. In reality however, it was a powerful reminder that no matter how many competitions he misses, the 2006 Olympic Champion still remains one of the most steadfast and reliable competitors, capable of enchanting the audience by the sheer strength of his personality.

Despite much publicized collaboration with Kenji Myamoto and Pasquale Camerlengo this summer, Plushenko’s program set to a tango arrangement of Vivaldi’s Four Seasons was not markedly different from his previous routines. Some will most likely revel in this fact, while others will undoubtedly point out all well-known flaws.

However, according to the skater, doing even that much was a challenge.

“It went very decently. I am quite happy with the job I have done,” he said about his performance. “Tomorrow will be another day, though, so it is too early to celebrate. I still have to skate well tomorrow.”

“Naturally, there are things which I could have done better in the short program,” he admitted, “but overall I am satisfied that I have landed the quad.

“I have only resumed doing quads here in Sochi,” he explained. “A month ago, I underwent a surgery and it resulted in a major drop in my physical conditioning. So it was only here, basically yesterday and today, that I managed to land a first couple of quads. I am especially happy that I did it, even though I failed to land a clean one during the warm up.”

“I have decided not to risk going for a quad-triple even though I could have done it,” the 30-year-old added. “I think I have fulfilled all my goals for today. I am very happy.”

The judges were obviously happy with his performance as well. He posted 91.66 (44.83/46.85) points and did not receive a program component score below 9.00, picking up three 10.00 for Performance/Execution, Choreography and Interpretation from one of the judges. The student of Alexei Mishin credits intense training early in the season for his recent bout of health issues.

“I have attempted too many jumps early in this season,” Plushenko stated. “I started to land quad Salchows, begun working on the quad Lutz… I am not young any longer.”

“Truth to be told, I have already forgotten when I competed healthy,” he lamented. “Fortunately, I know pretty well how to skate while injured, through pain. I have year of experience in tolerating it.”

“For me it was my maximum,” he added. “Initially, the plan has been to deliver the same content as the one I had in Sheffield, which was a triple Axel, triple Lutz – triple toe loop combination, and triple loop. But I managed to land a couple of quads here and it told me that I am borderline ready for it. So we have decided to attempt a quad. It was a risk, but we have decided to go for it.”

The skater remains vague about his plans for the rest of the season.

“For me the most important season is the next one,” he claims. “Everything else is transitory. I do not want to get ahead of myself. If I am healthy enough I will compete at the European Championships and then we will see. May be I will make a trip to London too.”

Sergei Voronov also seems to be on a comeback trail. He nailed his entertaining Sailor Dance routine, producing a quad toe loop-triple toe loop combination, a triple Axel, and triple loop out of steps. He earned 87.69 (45.98/41.71) points, and is the only competitor to have a chance to challenge Plushenko tomorrow, however theoretical this chance might be.

“I think the most important thing is that I have managed to overcome my nerves,” the former two-time Russian champion told the press. “I do not know why I felt this way. Maybe because I skated last in my warm up group and I had to wait too long. I did all my jumps pretty well.”

“As for the other elements, there are some questions,” he added. “I did not have enough strength left to execute all seven elements properly the way I do them in practices, but I am very happy with my performance. It was the first time this year that I managed to land a quad toe loop-triple toe loop combination and to do all other elements well.”

Maxim Kovtun was expected to challenge for Senior medals in Sochi. While he is nominally third, the manner in which he ended up in this position left much to be desired. The 2012 ISU Junior Grand Prix Champion fell out of his opening quad toe loop attempt and later crashed on a triple Lutz. All other aspects of his performance to music from the Lawrence of Arabia soundtrack was strong and he earned 75.38 (37.49/38.89) points to finish a distant third.

“I am not fully satisfied with my performance today,” stated Kovtun, who claims to be perplexed by his failure to skate a clean program. “Maybe it was because I plunged right into training after my return from the ISU Grand Prix Final. I immediately started to prepare for the Nationals, but the time was short, so it is possible that we missed something. I only got consistency back a couple of days before the departure for Sochi.”

“I am only happy about my spins and steps,” he summed up. “I do not understand what happened to my jumps. They worked very well during the warm up and practices. I guess my nerves let me down. Tomorrow will be another day. I will keep fighting.”

The student of Elena Byuanova and Tatiana Tarasova denies that introducing the quad into his short program was a reason for mistakes.

“I have done full run-throughs with quads two times in practices,” he explained, “and both times it was clean. So I guess I was too nervous.”

Kovtun is closely followed by four other competitors.

Artur Gachinski once again was unable to produce a clean quad toe loop and triple Axel, but picked up good levels and good program components scores to finish fourth with 74.58 (35.98/39.60) points. The student of Alexei Mishin is unable to pinpoint a cause of his problems this year.

“I think I am more affected by a weird lack of preparation than by the fact that my feet are often swollen,” he explained. “Before every competition, I either fall ill or catch cold or something else.”

“These mistakes on quads, they keep showing up on and off,” he added. “Sometimes I barely miss any, and sometimes I crash. It is 50/50 in practices, too.”

Mikhail Kolyada did not attempt any quads, but his upbeat and well-choreographed routine to The Mask soundtrack featured a strong triple Axel and a good triple Lutz-triple toe loop combination. Unfortunately, the skater did not receive any credit for his final combination sit spin, otherwise he might have moved up a couple of spots (74.46).

Konstantin Menshov delivered his usual hit-and-miss routine: a stumble out of a triple Axel landing was followed by a strong quad toe loop-triple toe loop combination, but then the student of Evgeni Rukavitsin fell on a triple Lutz (73.88).

“A few days ago I started to feel pain in my feet,” he explained. “Today I had to unlace my boot almost completely. At home I experimented with adding something to the boot to alleviate the pain, but during this morning practice I realized that the pain is too strong. I have tried to bandage my foot, to make it easier to step on it, but the boot is very tight. I guess I will have to change boots.”

Artur Dmitriev fell on his opening quad, but did all other elements well (72.38).

Zhan Bush struggled with his jumps (he fell out of triple Axel landing, underrotated and fell out of a quad toe loop, and received an edge call for his triple Lutz in combination with a triple toe loop). He is currently 11th with 62.60 points.