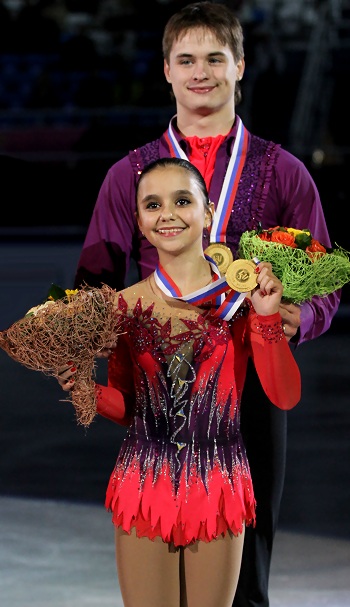 Lina Fedorova and Maxim Miroshkin of Russia won the Pairs title at the 2012-13 Junior Grand Prix Final of Figure skating.

Lina Fedorova and Maxim Miroshkin completed Team Russia’s sweep of the 2012-13 ISU Junior and Senior Grand Prix Final of Figure Skating titles by winning the pair skating event. They are joined on the podium by teammates Vasilisa Davankova and Andrei Deputat (silver) and Maria Vigalova and Egor Zakroev (bronze). It was the first Junior Grand Prix Final for all three teams.

Fedorova and Miroshkin performed to a medley of from The Pajama Game and Hernando’s Hideaway, opening with a sky-high triple twist, which received a level three from the technical panel (the team earned a level four for this element at both qualifying events). The team from Moscow picked up very impressive Grades of Execution (GOE) for their other elements, however, they did not attempt any side-by-side triple jumps and their final throw triple Salchow was flawed.

“This was definitely our best performance this season,” said Miroshkin, 18, “but I think that we still can do better. Our weakest point, I think, is (basic) skating. We still skate like children. We must work on it more.”

“We had all the best pairs here, so it wasn’t easy to win,” added Fedorova, 14. “We came here hoping to improve our performance, to better our result from the Grand Prix. We were a bit nervous because our season’s best result was much lower than the scores needed for gold here, and when we saw the scores, we were really happy.”

Their next event is the Senior National Championships, which will be held at the same venue in two weeks. They will face the top three Russian teams who are competing in the Senior Grand Prix Final later today. When asked whom they will support, the skaters had it covered.

Davankova and Deputat delivered much more ambitious technical content, which included side-by-side triple toe loops and double Axels in the second half of the program. However, their triple twist and their second lift only garnered a level one which cost them quite a few points in the base value of the program. Their GOEs were also lower than those of the leaders, so the students of Sergei Dobroskokov had to settle for second place (104.62 (52.96/51.66) and 155.96).

“We just tried to do our best,” said Davankova, 14. “We were nervous about the toe loop, double Axels, and lifts, but finally we did everything as planned, except for the lift. We also wanted to beat the Canadian pair (Purdy/Marinaro), because they had defeated us [earlier] this year.”

Her partner was more effusive.

“Of course, we are glad! Such a big score!” exclaimed Deputat, 19. “It’s our record. Certainly, we were nervous. The performances of our competitors were so clean. Before, our best program components score was 46 points and now we got over 50!”

The World Junior bronze medalists were quite certain that the outcome of the Senior Pair Skating Final is all but decided.

“Sure, we all know who will win,” said Davankova, “but I want Vera (Bazarova) and Yuri (Larionov) to retain silver, and Yuko (Kavaguti) and Sasha (Smirnov), they had a mistake in short program… I think they’ll manage to fight back, they are a great pair.”

Vigalova, 13, and Zakroev, 18, also did not make any mistakes in their performance to Symphony on a Battle Lost by Benny Richter and Marc Terenzi. Even without side-by-side triple jumps, they earned the best total element scores of the evening, however, the program components score for the youngest duo in the field was understandably lower. They earned 102.80 (53.22/49.58) points, and with 153.56 overall, they pulled one spot up to capture the bronze.

“Taking both our performances (in the Short Program and in the Free) together, I think we did well,” said Zakroev. “Improving our personal best is great.”

“We would like to thank the fans,” he added. “They supported us a lot and made it very easy for us to skate. We have done what we have planned to do, but not without some issues.”

When asked to elaborate, he added: “We did not have enough speed in our death spiral and we only held it long enough for the third level. Also, we got level three, not four, for our triple twist. However, we avoided making major mistakes. We skated well, and the coaches are happy and so are we.”

The skaters have now qualified for Senior Nationals (as JGPF medalists), but they say they did not quite expect this result.

“We can’t say we expected to beat the Canadian pair (Purdy/Marinaro),” he admitted. “We just tried to skate our best without thinking about the ranks. The main thing was to skate a good program, and I think we’ve made it.”

The team was quite modest when asked about the reasons for their success.

“First of all, it’s our coaches’ achievement,” said Zakroev. “Soviet and Russian coaches have always been famous for coaching pairs, and before the Vancouver Olympic Games, we grabbed all the gold medals. I think we have proven today that everything is not so bad in pair skating.”

Meanwhile, they have enjoyed the experience of seeing the top Senior skaters in action.

“We rooted for other skaters yesterday,” offered Zakroev, “not only the Russians. It’s a pity that we did not have a competitor in the Men singles, but a chance to see such skaters like Patrick Chan and Daisuke Takahashi is worth a lot. This alone is good enough to try to qualify for the Final.”

“We were also very happy for Elena Radionova,” he said. “Her brilliant performance encouraged us a lot, set the mood. It’s wonderful that Junior and Senior Grand Prix Finals have been combined. It gives you a chance to look at Senior pairs who have qualified for the Final. It’s a great pleasure to watch them skate.”

Despite his admiration of the traditions of the Russian pair skating school, Zakroev recognizes the high-quality of his compatriots’ rivals as well.

“I don’t know if the guys support me, but the Chinese pair (Qing Pang and Jian Tong) appeal to me a lot,” he told the press. “Their spins and throws are very well-done, and their technique is also at the highest standard.”

Margaret Purdy and Michael Marinaro of Canada, who stood in second after the Short Program, had a disappointing outing in which they missed both jumping passes and ran into problems with a triple twist. The team earned the second highest program components score with 98.11 (47.77/52.34) points for their effort, placing fifth in the long, however, they slipped from third to fourth overall with a total score of 149.94.

“We started off rough,” admitted Purdy, “but in the end, we pulled it together and skated well. We are very happy with the skate we did. [We had] some very good throws and lifts, and we performed it well. I think we just need to keep pushing ourselves technically and artistically. There is not much to work on, we just had some errors today.”

China’s Xiaoyu Yu and Yang Jin once again excelled technically, picking up the second highest total elements score of the night, but remained in the fifth place overall (149.20).

“We really liked our performance today,” said Jin. “The best elements today for us were the throws. We plan to confirm our position in international figure skating. We also want to add more difficulty to our elements.”

Brittany Jones and Ian Beharry of Canada remained in sixth (145.89).

“I think overall it’s pretty good,” said Beharry. “We landed everything we wanted to land. A few shaky things, but overall it was a clean skate for us.”