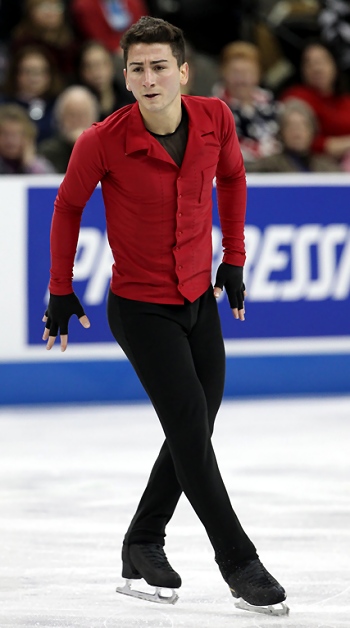 Aaron unseated reigning champion 27-year-old Jeremy Abbott, the leader after the short program, who finished in third place. Still in disbelief with his victory, the titlist was a man of few words when it came to discussing the win.

“I just want to thank everyone for supporting me over the years that I’ve competed,” he said with a crack in his voice.

Skating to music from West Side Story, Aaron attacked his program from head to triple toe, nailing an opening quadruple Salchow-double toe loop combination right off the bat. In all, Aaron hit seven triples and two quads—both Salchows, and scored a whopping 96.39 points for his executed elements, nearly ten points more than any other skater in the competition.

“I give everyone credit who even tries a quadruple jump in a program because it’s never an easy task,” he said. “I know I wasn’t successful the entire year, but you’ve got to learn from it.”

“As the year progressed, I would hang out with ‘the beast’,” he explained. “I call it the beast because some days you have it and some days you don’t. On the world stage, you see guys that will do two, three [quads] a program and we know that men are doing two in the short program.”

The new king of U.S. men’s skating scored 255.00 points in the competition, the third highest total in competition history, and earned a ticket to the upcoming Four Continents and World Figure Skating Championships.

“The goals I had coming into this event were to complete two clean programs,” the 2011 U.S. national junior champion shared. “I knew if I competed the best two programs I can, I knew I could be up there.”

“With the other men, I knew a lot of them were trying quads,” Aaron explained. “Coming into it, I expected all the men would land their quads and do their jumps. I wanted to be competitive. I never thought of me being national champion to be honest. It’s an honor and I’m taking it in stride. It hasn’t hit me yet. I hope I make everyone proud and I show our U.S. men are something.”

Abbott opened his self-choreographed Bring Him Home routine with his attempt at a quad—an under rotated toe loop, on which he fell. The three-time champion recovered well enough to unleash six triple jumps, but was unable to seal the deal and doubled his final two triple attempts.

“It’s been an interesting season for me,” said a composed Abbott after the competition. “I love this program. I have been saying that all week, good or bad, I love to perform it. I put a lot of heart and a lot of myself into it.”

“I had a stupid lapse of judgment at the end of the program,” commented the former and three-time national champion. “The triple Salchow is the easiest thing in my program. It would have put me just over the top. It’s sport.”

Abbott earned the highest program component scores of the day, but was unable to keep pace technically. Even on the non-jump elements, the bronze medalist had an off day—he failed to earn a single level four, instead squandering points by earning level threes across the board.

“I talked to (coaches) Yuka (Sato) and Jason (Dungjen), and the goal for here was to rotate the quad and then go for everything else,” Abbott explained. “I’ve been training really good programs at home. [This] is exactly what I didn’t want to happen and I’m probably going to be left off the team one more time, so it sucks.”

And he was, although he is the first alternate.

“To be really, truly competitive, you have to have the quad in short and long,” said Miner, who achieved this goal. “This year is the first year where it’s become apparent that the quad is incredibly important. It’s going to continue into next year. I think it’s great that we had a lot of guys trying them here and we have a really deep field.”

The runner up landed seven triple jumps in all, but popped an intended triple Axel into a single, costing the 22 year-old the title.

“We put on a good show; I think the crowd was awesome,” said Miner. “I was happy with the first two jumps, that quad Sal felt great. The single Axel is not what I was looking for, but I’m happy I kept my head in it and fought all the way to the end. It was a good day.”

Miner finished with 251.29 points overall, increasing his personal best by more than 20 points, and will be competing alongside Aaron at the Four Continents and World Figure Skating Championships.

Joshua Farris finished with the pewter medal, catapulting from 16th a year ago, and erasing demons of championships past.

“I’m feeling awesome, I can’t believe I medaled,” said the wide-eyed teen. “I went out there and was like, ‘you know what, I have nothing to lose, I’ve already accomplished way more than I have in the past nationals.’ I went out there and did what I knew how to do, did most of it, only one little fumble on the quad, but I have room to grow.”

Farris, the 2012 Junior World silver medalist, boasts a resume full of international medals, but has struggled to break through in these championships since making his debut in 2011. Today, Farris lived up to his promise, combining elegance and eight triple jumps to finish with his first U.S. Championships senior medal.

Although the 18-year-old fell on his quadruple toe loop attempt, he smashed his personal best by more than 45 points, and finished with 244.82 points in the competition.

“Well, it is nationals so I have to subtract quite a big load of points for junior (program requirements) and international (judging panels),” Farris said, “but if I can do that with this much pressure and this crowd, then I can do it anywhere.”

Adam Rippon, 23, silver a year ago, moved up from sixth to fifth place with 229.87 points, after a steady performance. The two-time World competitor landed five clean triple jumps in his The Incredibles program.

Richard Dornbush, 21, silver medalist from the 2011 championships, finished in sixth place with 228.81 points.

Honorable mention goes to Alexander Johnson, who finished in seventh place, moving up from 12th with an inspired performance to an orchestral version of The Beatles’ Eleanor Rigby. The 22 year-old’s best finish in these championships was 15th a year ago, but today he was brilliant. With the fifth best program of the day, Johnson scored a personal best of 224.49 points in the competition.