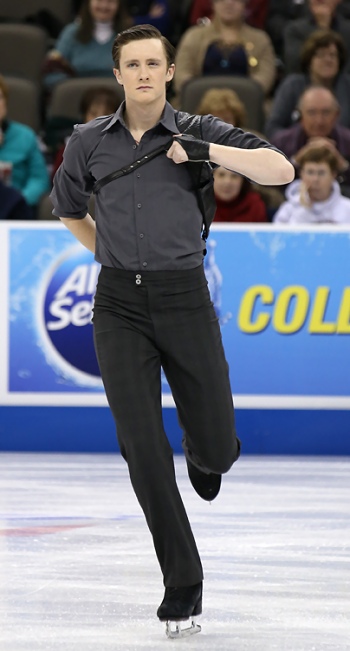 Jeremy Abbott performs his Short Program at the 2013 US National Figure Skating Championships.

In an evening of spectacular skating in the Men’s short program at the 2013 U.S. National Figure Skating Championships, it was three time and defending gold medalist Jeremy Abbott who came out on top.

The 27-year-old electrified the crowd with his playful “Spy”program, and carries 84.10 points into Sunday’s free skate.

“I’m always happy to be in this position,” Abbott said with his crooked smile. “That was a lot of work. You know, I came into this championships knowing that this was going to be more work than in past seasons. I had a late start to the season, and had some setbacks. Things have been going much better in training. For me, my focus was to do the best I could for now, and then move on to the world championships in London (Ontario) and make magic happen there.”

Abbott played it safe—forgoing an attempt on a high scoring quadruple jump, and instead went for quality over quantity. He opened with a triple flip-triple toe loop combination, and also landed a nice triple Lutz and a triple Axel. Three of his spins earned level three, and a fourth that was awarded a level four.

“The quad came out a couple weeks ago, and like I said earlier, I had some set backs with my back early in the season,” Abbott explained. “We tried tinkering with the technique of the quad, and it put things back a little bit and now it’s starting to come back together. I just wanted to do solid programs here, get through this, and then really go full out for Worlds.”

Abbott does plan a quadruple jump in Sunday’s free skate.

In second place is last year’s bronze medalist, Ross Miner, who skated immediately after Abbott in the lineup. The 22-year-old used the momentum of the crowd, and went for broke—he opened with an under rotated quadruple Salchow in his “Rhapsody on a Theme of Paganini” program. He scored 80.99 points on the night.

Though he could not match Abbott’s program component scores, he challenged on the technical mark, earning two level fours and two level threes on his spins. Miner nailed his triple Lutz combination and his triple Axel, and earned just .82 points less than the leader.

“Tonight was a little bit tentative for me, but I’m really happy that I was able to go out there and skate a pretty solid program,” he said.

Finishing in third place is a new face to the top of the leader board—Joshua Farris. The reigning Junior World silver medalist skated second in the competition, and remained atop the standings for more than two hours before Abbott took the lead.

“It definitely was very long,” Farris said of the wait. “After every skater, I was shaking, I was wondering how they were going to do, but I waited, and I am in the position that I am in, and I can’t believe it.”

The 18-year-old skated the short program of his young career, landing a triple Axel, a triple Lutz combination, and a triple flip in his routine to Suite for Solo Cello No. 1 in G Major: Prelude. The Colorado Springs-trained athlete was one of just two skaters in the competition to earn level four on each of his elements, and carries 79.78 points into the free skate.

“I’m so happy with what position I am in now,” said the surprised Farris. “I skated great. I’m happy with my performance, and I can’t wait to show you guys what I got in my free skate.”

Max Aaron, 20, is in fourth place with 79.13 points. The 2011 U.S. junior men’s champion opened his Tron: The Legacy program with a gorgeous quadruple Salchow-triple toe combination, and also landed two more triples—a Lutz and Axel. The Scottsdale, Ariz., native had the highest technical marks of the night, but could not match the top three in program components.

Richard Dornbush, a member of the 2011 World Championships team, finished in fifth place with 77.66 points. The 21-year-old landed a quadruple toe loop to open his “With or Without You” short program, but under rotated his triple Axel attempt.

Last year’s silver medalist, Adam Rippon, finished in sixth place with 76.65 points. The 23-year-old fell on the back half of his triple flip-triple toe loop combination.