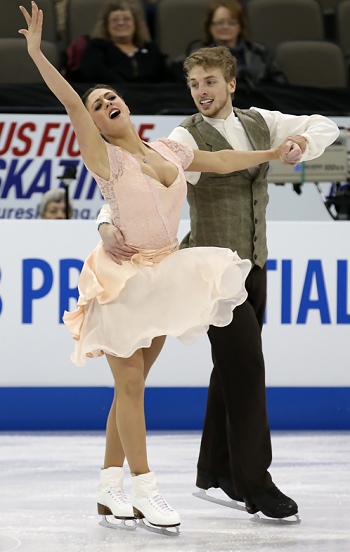 Alexandra Aldridge and Daniel Eaton perform their Free Dance at the 2013 US National Figure Skating Championships.

Alexandra Aldridge and Daniel Eaton from the Detroit Skating Club won their second junior dance title at the 2013 US National Figure Skating Championships today in Omaha, leaving little doubt that they were the class of the field.

The reigning Junior Grand Prix Final bronze medalists skated a lively program to music from Fiddler on the Roof, and won the title by more than ten points.

“It’s a great honor to be able to say that we are two-time junior ice dance national champions,” Aldridge said with an easy smile. “We’re just so happy that we can come here and skate two great programs and show the crowd what we love to do.”

Eaton added, “We’ve had two great performances out on the ice yesterday and today, and I don’t think that we could have asked for a better job done.”

The program, which referenced traditional Jewish dance moves, was chock full of difficulty, earning Aldridge, 18, and Eaton, 20, level four on six of their elements. The lone hold out was a level three on the diagonal steps that was marred by a slip by Aldridge to start the sequence.

“It was just a little (mistake),” she explained. “I tripped—I can’t even tell you what step it was on.”

“Our coaches always tell us that we need to be reactive because when you are out there, anything can happen, especially in training,” she added. “If you do make a mistake, you have to skate through them so that you’re prepared if something like that happens in competition. For us, we know how to react, and know how to get back into the program as soon as possible.”

“So when I fell, I knew that I had to refocus as soon as possible and get into the diagonal step sequence, and I did that to the best of my ability,” she summed up.

Moving up from third after the short dance were training mates Kaitlin Hawayek, 16, and Jean-Luc Baker, 19. Though still very green in terms of competition—this is only their fourth year as a team—the duo performed like seasoned veterans in their lighthearted “Singin’ in the Rain” program.

“I think that we are both very honored to have the opportunity to compete at nationals and be where we are right now,” said Hawayek. “It’s been a great pleasure to skate our programs for (everyone), and we really enjoyed ourselves, and I think that it showed in our skating this week.”

Like the champions, Hawayek and Baker managed six level fours and one level three—this one on the circular steps. Their total of 149.74 points was just enough to overcome the bronze medalists, Lorraine McNamara and Quinn Carpenter.

“I’m happy with how we skated. It’s great to be back in the game,” Baker admitted. “We try to take things one step at a time, and try to have fun while doing it.”

McNamara, 13, and Carpenter, 16, may have experienced déjà vu following the competition, repeating their placement from a year ago.

“We definitely think that we’ve improved, and are able to handle more sophisticated programs,” Carpenter said. “I think that we’re definitely happy with our placement, especially since everybody has improved so much this year.”

“It’s also good to know, even though our programs are harder than last year, that we’ve been able to progress with them,” McNamara added. “We still have room to improve also.”

The bronze medalists, who train in Wheaton, Md., earned five level fours in their Le Balcon and Le Rois Du Monde program, and likely missed the silver medal by one level on either of their two level three elements—the circular steps and diagonal steps.

“We definitely really enjoyed the pieces that we did this year, and we had a wonderful time sharing them with everyone this week,” Carpenter said. “Everyone has been so kind, and I really enjoyed our whole experience here.”

McNamara and Carpenter finished with 149.25 points in the competition.

Holly Moore, 17, and Daniel Klaber, 18, another Detroit-trained team, finished in fourth place with 141.33 points. The 2012 U.S. novice dance champions skated a mature program to music from Moulin Rouge, and should be a team to look for in the future.