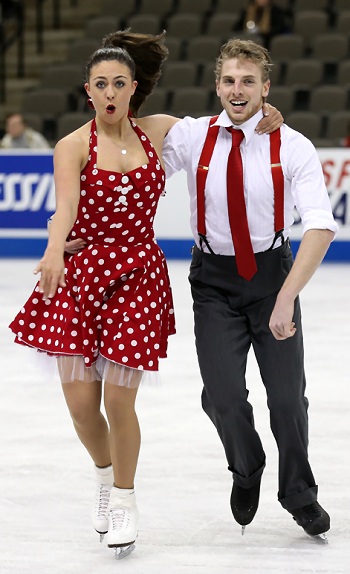 Alexandra Aldridge and Daniel Eaton perform their Short Dance at the 2013 US National Figure Skating Championships.

Defending champions Alexandra Aldridge, 18, and Daniel Eaton, 20, took the lead after the junior short dance at the 2013 US National Figure Skating Championships, keeping themselves on pace to become one of just a handful of teams who have captured two U.S. junior titles in the history of the event.

“We had one more year of (junior) eligibility, so we had a meeting with our coaches at the beginning of the season and discussed different ideas,” Eaton explained. “We all thought it was a better decision for us to stay junior, travel more internationally, and get more experience for the move to senior.”

Aldridge added, “What is very important when you compete is to not think of others—you can only think of yourself and the way you perform.”

“There are a lot of skaters who are coming up, but we are confident enough in our training, and based on what we did in competitions before this, that if we skate like we know how we normally do, we’ll be fine,” she summed up.

The leaders skated with confidence and poise with a little added sass for good measure in their Downhome Blues and Pennsylvania 6-5000 program, scoring a whopping 66.11 points in this phase of the competition.

“It was a good performance—you know, we’re home. This is U.S. Nationals, and we’re a little more confident here, and a little more comfortable,” Eaton admitted. “We definitely love to come back every year.”

Other than a level three on their opening step sequence, Aldridge and Eaton earned level four on the rest of their elements, and increased their score with positive Grades of Execution (GOE) on each judged move in the program.

“This year the blues pattern has been particularly difficult for us because we haven’t gotten the levels that we have been wanting,” Aldridge explained. “[Getting the level fours] was a big goal for us coming here, and we’ve been doing those blues Choctaws and (other) key points every day. That was one of our goals for the day, and it was great to be able to achieve that.”

Finishing in second are last year’s bronze medalists, Lorraine McNamara, 13, and Quinn Carpenter, 16, who performed as the undead to a medley of Ramalama and Zombie Blues that was a crowd favorite.

“It was really clean and controlled,” Carpenter said after the program. “That’s always the best feeling. It was one of those performances when we didn’t have to think about every little thing—it just came naturally.”

The Maryland-trained McNamara and Carpenter knew that skating to hip-hop was a risk, but committed themselves to the character of the program.

“There was a little bit (of insecurity in the music selection), but I think that we knew that if we were going to go through with this, that we had to really go through with it,” Carpenter explained. “If we were just half and half or so-so with it, then it kind of loses the point of doing something this different.”

The duo drew some inspiration from the television show, So You Think You Can Dance, which featured a zombie group number in season two set to some of the same music.

“We used that to see how those professional dancers moved and carried their bodies,” McNamara shared. “We never really thought about doing hip hop before, but once we discovered it, it was really fun.”

McNamara and Carpenter scored 63.67 points in the competition, setting up an exciting showdown in tomorrow’s free dance.

“We’re just thrilled with how everything is going,” Hawayek offered. “We’ve seen great loads of progress to start with, and I think that everything felt very strong. We have something unique in that we have a very strong friendship and great connection on the ice, and I really hope that everyone saw that on the ice today.”

Hawayek and Baker performed like seasoned veterans in their Minnie the Moocher and Gimme Some Rhythm Daddy program, garnering level four on each of the two required blues patterns. The duo achieved some of the deepest edges of the competition, and was rewarded with 60.72 points for their efforts.

“We just continuously worked week to week to try to get our patterns a little bit deeper and powerful,” Hawayek said. “It might seem that we are right on the verge of disaster to the audience, but we are in control and never go past the point of where we can’t control (the edges). It’s a continuous process of improving and making things a little bit more sharp.”

Baker, who won the short dance two years ago with a previous partner, was pleased how he and his new partner performed their program.

Finishing in fourth place was last year’s novice champions, Holly Moore, 17, and Daniel Klaber, 18, with 58.39 points, who train with the leaders in Detroit.

McNamara and Carpenter’s training mates, Eliana Pogrebinsky, 14, and Ross Gudis, 17, finished in fifth place, while another of their teammates, Whitney Miller, 14, and Kyle MacMillan, 15, were sixth.