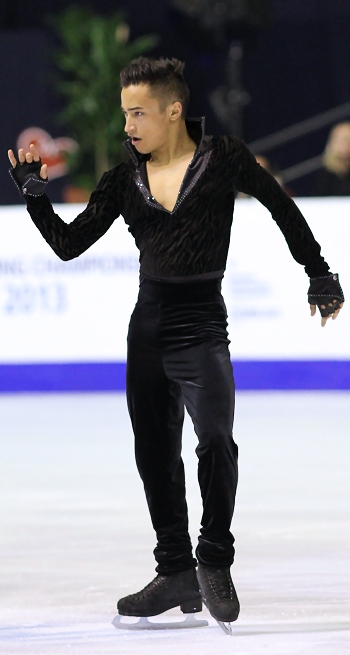 France’s Florent Amodio skated to the lead in the Men’s short program at the 2013 ISU European Figure Skating Championships in Zagreb on Thursday. Javier Fernandez of Spain is a close second, while France’s Brian Joubert came in third.

Drama unfolded when defending champion Evgeni Plushenko of Russia, hampered by a back injury, fell on a triple Axel and had to withdraw following the short program.

Amodio was the last of the top contenders to skate and he turned in a strong program to the Brazilian-inspired piece Memories of Sobral by Sebastien Damiani. The 2011 European Champion opened with a quadruple Salchow and followed up with a triple Axel and a triple Lutz-triple toe combination that was in the second half of his program, which earned him a bonus. One spin was a level four, while the other two spins and the footwork garnered a level three.

The reigning European bronze medalist improved his personal best by almost eight points with a score of 89.82 (49.18/40.64) points.

“I was very focused. I didn’t have a good short programs in the beginning of the season, and I really wanted to start well into this competition,” Amodio said. “(Coach) Nikolai (Morozov) did a lot of work with me (after Nationals). After skating this program, I know what I can do. I know that it is possible for me to be in first place, and I’ll go with this feeling into the free skating on Saturday.”

Amodio had dumped his Flamenco short program after the Grand Prix as he didn’t feel comfortable with it.

“The beginning of the season was so-so,” the 22-year-old shared. “I won Nationals, but Brian (Joubert) wasn’t there. Now we show the French team is still here, still strong. We worked hard every day before this competition.”

“Brian and I wanted to perform and show the audience everything is possible,” he continued. “We did our jobs and we have to do it on Saturday. I am going to relax tomorrow and practice.”

“This is the first time in Europeans and here in Zagreb that I got a small medal, so I am so glad,” said the Spaniard. “Every year I go higher and higher. The focus in the next couple of days is to try to be on the podium in the Free Program too.”

The 2012 Skate Canada champion is close to winning a figure skating medal for Spain, a historic first at an ISU Championship.

“I was a little bit scared because my skates were lost at the airport and I missed all the practices on the main rink and so I haven’t touched this rink before today,” the 21-year-old explained.

Joubert had a rough start to the season and a lot of problems with his ice rink closing and changing coaches, however, he came out and proved that he is still a force to be reckoned with.

The three-time European Champion did a three turn out of the the opening quad toe, but still managed to add on a triple toe. The triple Axel and triple Lutz were strong and he collected a level four for two spins in his program to Genesis and Aerodynamic by Daft Punk. The 28-year-old achieved a new season’s best with 83.93 (44.17/39.76) points.

“I am very happy with my performance today,” said the 28-yearold. “I am pleased I did the quad. Maybe I lacked confidence in the beginning of the program, but it went well. I am at the point in my career when I don’t think about the results, the points. I just go on to the ice to fight.”

Michal Brezina of the Czech Republic came in fourth at 79.84 (40.91/38.93) points. He finally landed his quad Salchow in his routine to In the Hall of the Mountain King, but stepped out of the triple flip. He still added a double toe, but it didn’t count for a combination. The Czech recovered to land a nice triple Axel and earned a level four for two spins and his footwork.

“It could have been better,” the 22-year-old admitted. “I think I got a bit over-excited after the quad. The flip went up beautifully, so big, and then I stupidly forgot to open it. I landed it badly and couldn’t stop it in the landing and so lost the combination. I lost five points from not doing the combination.”

Russia’s Sergei Voronov turned in a strong performance to the Russian Sailor Dance to finish fifth at 78.38 (42.81/35.57) points. The national silver medalist hit a quad-triple toe combination, a triple Axel and triple loop.

“It was a little hard for me as I hurt my (left) knee in the warm up,” the 25-year-old confessed. “I hurt the ligament and the doctor will look at it right now, but I did almost everything. I landed my quad-triple combination and that is already a plus.”

Voronov has positive memories of competing in Zagreb in 2008.

“It was my first Europeans back then and I like to skate here,” he said.

Plushenko had decided to come to Zagreb only on Friday as he is still battling a back injury. His condition had not improved since Russian Nationals and it was obvious in practice that he was not at a 100 percent. In the short, the 2006 Olympic Champion opted for the triple Lutz instead of the quad toe, but the landing was shaky.

The bigger mistake, however, came when the 30-year-old fell on the triple Axel, although he recovered to land a triple loop-triple toe combination. Two spins were a level three while the change sit spin got a level four, but the footwork merited only a level two. The seven-time European Champion earned 74.82 (35.46/40.36) points.

“It wasn’t a magic day today,” Plushenko observed. “I fell on the triple Axel. Maybe I rushed it, maybe I wasn’t completely focused. When we got here to the ice rink, we decided not to go for the quad toe but for the triple Lutz instead, and maybe I didn’t fully switch my focus.”

“The fall on the triple Axel is an unforgivable mistake for me,” the three-time Olympic medalist told the press. “It wasn’t the injury, it wasn’t my back. I missed an easy element for me. I need to do the triple Axel with my eyes closed.”

His right hand was bloody as he cut it while tying his laces right before he skated. Right after the end of the short program Plushenko withdrew as he suffered an aggravation of his chronic back condition.

Maxim Kovtun of Russia landed a nice quad-triple toe combination but doubled the Axel and put his hand down on the triple Lutz to score 74.46 points. The 17-year-old finished in seventh place.

“I don’t know what happened,” said the ISU Junior Grand Prix Final Champion. “It was terrible. Maybe I was nervous, but I was 100 percent prepared for the competition. Tomorrow, I will just begin to train again to prepare for the free.

“Of course I had good memories of this place,” he responded when asked about his his win at the Junior Grand Prix event, “but at the moment everything is just very bad.”

Sweden’s Alexander Majorov turned in a clean program that featured a triple Lutz-triple toe, a triple Axel and a triple flip. He collected 74.29 points and currently sits in eighth place. Like Fernandez, his luggage was delayed and he got it only Wednesday morning.

“I didn’t think at all about my skates (coming late),” the 2011 World Junior bronze medalist commented. “I just thought about doing a good program. It is not a problem for me (not to practice at the main rink).”

“Today felt really good,” added the 21-year-old. “It is the first time for me to skate really well in a major Championship. I skated well in smaller events, but not yet at such a big event. Maybe I have learned and got more experience.”

Tomas Verner of the Czech Republic had won his European title back in 2008 on this ice in Zagreb, but luck wasn’t on his side at this event. After crashing on the quad toe, he also reduced his combination to a double Lutz-double toe, however, his triple Axel was good (68.99 points).

“This was a not a performance I was hoping to deliver,” admitted the 26-year-old. “I am struggling all season with execution of jumps in the short program, and I don’t understand why. I love the music and the story I am telling (music is from Dracula), but somehow it is not working. There is not much I can achieve in the long program for overall placement since I am so far behind in points. I can only try my best to skate clean, not to fall.”

“I felt confident going in because I’ve trained hard and smart,” said the 25-year-old. “It is cool being able to enjoy the performance. I just do my thing.”

“I had meniscus surgery at the beginning of October so I had to use every minute and every second of training,” the seven-time national champion explained.

Now he is looking forward to the free skating on Saturday.

“I love the program and I love the music. I want to go for the quad and fight to do the best I can .”