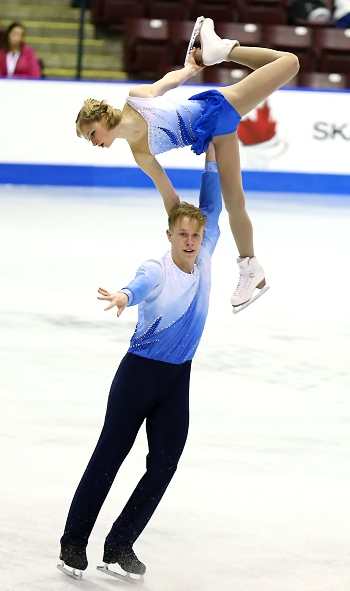 Personal bests were set and triple throws flew across the ice with ease In the junior pairs free skate at the 2013 Canadian Tire National Figure Skating Championships.

The final flight was composed of four excellent free skates, each with medal-worthy elements. In the end, Hayleigh Bell and Alistair Sylvester (CO) retained their first-place ranking. Natasha Purich and Sebastian Arcieri (QC) won the silver, while Mary Orr and Anthony Furiano (WO) captured the bronze.

Bell and Sylvester’s total score of 140.60 was world-class for the junior level, as were their two throw jumps, a triple loop and a triple Salchow in their long to Chopin’s Fantasie Impromptu. Their free skate scored 92.87 (49.11/43.76) points.

Both skaters are singles skaters as well, with Bell (16) qualifying for the Canadian Championships at the junior level, but their side-by-side jumps gave them a bit of difficulty. They landed their double Axels, however, they not really sing like the rest of the elements, and Sylvester (18) also singled the final jump of what was meant to be a double-double-double combination.

Still, the pair was elated with the free skate that won them a third consecutive national title.

“Really, it was a dream come true,” Sylvester said, summing up the experience.

They had to take the ice after Purich and Arcieri laid down a terrific program with a big score, but that did not rattle them.

“I kind of like hearing the scores just to know where we’re at and what we can do,” Bell said.

The duo is very driven and competitive, spending three to four hours on the ice each day to practice both singles and pairs. Their high school offers a flexible schedule that includes some online courses, allowing them the training time that they need.

When asked what they would choose if they had to decide between pairs and singles at some point in the future, the answer was an easy one.

“I don’t think the partnership is breaking up anytime soon,” Sylvester said. “Pairs is our calling.”

Purich, 17, and Arcieri, 18, had something to prove after their short program, which earned a disappointing score. The brand-new pair fought hard in the free skate, but still took time to entertain the audience which included several of the senior pairs competitors that had stopped by to check out the future of their discipline.

“It was the best long [program] we’ve done,” Arcieri said afterwards. “We couldn’t ask for better.”

The duo navigated their way through difficult elements to music from Mack and Mabel, which featured two sets of triple side-by-side jumps. The newness of the team was prominent, but they are improving very quickly, even fixing the major problems from the short program—the unison on their side-by-side spins and their death spiral.

“We missed out on a complete elements [in the short], which is hard,” Arcieri explained. “The side-by-side spin was…well, I was all over the place, but things happen and you just have to come back.”

Purich has been on the Canadian junior podium before—she won the title in 2011 with Raymond Schultz—however, this is a big jump for Arcieri, who was eighth at the novice level last year with Jessica Landry.

Orr and Furiano moved up a spot after the short program to repeat as bronze medalists at the junior level. They landed two triple throws, including a Lutz (although Orr stumbled out of the landing), but their side-by-side arsenal of jumps does not yet include double Axels or any triples which kept them from reaching the top two teams. Their pair elements are solid, however, and their triple twist was the best twist of the afternoon.

“We’re very happy and excited,” Orr said. “We’re proud of the hard work that we have done to achieve skating a clean program.”

“It’s really nice to be on the podium three years in a row,” Furiano added.

The pair delighted the crowd in attendance at the Hershey Centre with their routine to Charlie Chaplin, a program they only developed after a few rough summer competitions.

“We decided to get a new program,” Furiano offered. “We were skating to Last of the Mohicans, which was more serious. We decided to go along with our short, which is pretty peppy, so we went with Charlie Chaplin. Since then, pretty much every day in practice, we skate clean shorts and clean longs.”

Now 16 and 22 years old, Orr and Furiano are age-eligible for the senior international competition if they decide to make the leap to seniors next year. Due to their age gap, they have not been able to compete on the Junior Grand Prix circuit.

Shalena Rau and Phelan Simpson (WO), training partners of Orr and Furiano, skated with quite a bit more power than usual in their routine to My Fair Lady, however a few of the elements got away from them. A popped toe loop throw near the end seemed to seal the deal for them, and they slipped from third to fourth (120.31).