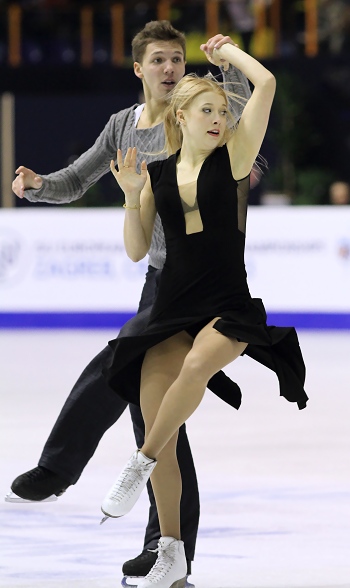 Ekaterina Bobrova and Dmitri Soloviev of Russia danced off with their first European title at the 2013 ISU European Figure Skating Championships in Zagreb, Croatia, on Friday, but it was a head-to-head finish with teammates Elena Ilinykh and Nikita Katsalapov. Only 0.11 points separated the two top teams at the end.

The bronze went to Anna Cappellini and Luca Lanotte of Italy, who took their first medal at the European Championships.

Bobrova and Soloviev delivered a technically and artistically strong performance to the haunting music from The Man With the Harmonica and Tosca telling the story of a man who lost his mind and his girlfriend who tries to bring him back. However, she eventually gets lost in his world herself while he comes out of it.

The Russian Champions executed difficult lifts, twizzles and a spin that were all graded a level four. They picked up a level three for the circular footwork, but the diagonal step sequence was a level two. The team earned a new personal and season’s best of 99.83 (47.00/52.83) points, but they lost the Free Dance to Ilinykh and Katsalapov. Overall they accumulated 169.25 points, edging out their teammates by just 0.11 points for the gold.

“It was not perfect and we did not show everything we can do – the diagonal step sequence only got a level 2 – but nonetheless, it was a season’s best for us,” Bobrova said.

“We are really pleased with our performance,” added Soloviev. “We had a clean skate and an emotional skate. We don’t know why the diagonal step sequence only got a level 2. We need to look at it and analyze it when we get back to Moscow as it is hard to evaluate it now. We probably had a more emotional skate at [Skate America] and in training, but it was good today.”

“I haven’t quite realized it yet,” said Bobrova of the win. “We honestly didn’t think about how our chances were to win as this would only have disturbed us. It was good for us to skate first in the group, we went right out to skate without thinking.”

Ilinykh and Katsalapov had great flow in their routine to the Ghost musical soundtrack. Their level-four twizzles were solid and fast, but in practice they looked even faster. The 2012 European bronze medalists collected level fours for the lifts and the twizzles, while the combination spin and the both step sequences gained a level three.

Overall, their technical base value was two points lower than Bobrova and Soloviev’s, however, the judges awarded them lots of +2 Grade of Executions (GOE). With 100.16 (47.08/53.08) points, Ilinykh and Katsalapov won the free dance, and when their score came up, they cheered However, when their total score (169.14) was revealed, disappointment showed on their faces.

“I don’t know how I feel at this moment,” said Katsalapov. “There was a good run-through this morning. We did everything we could today. We were excited. The public was amazing. We’re a little bit disappointed with the marks. We won the Free Dance and we’re less than half a point from the gold, so we will have to do it at Worlds. Everything could have been done better and apparently the judges see it the same way.”

Cappellini and Lanotte turned in another excellent performance of their powerful Carmen program that featured strong twizzles and lifts. They earned a level four for six elements, but lost a few points for the level-two diagonal step sequence. The team from Milan scored 99.27 (47.99/51.28) points, just short of their season’s best, and remained in third at 165.80 points overall.

“We reached our goal tonight. It was a very good performance,” Lanotte offered. “There was a small mistake on a step sequence after the twizzle, but the level of competition is very high and even small mistakes are costly.”

“We were extremely proud of how we skated tonight,” said Cappellini. “At this point of the season, everything is very well rehearsed. We really dove into the interpretation and the program went by so fast. We couldn’t be prouder of ourselves tonight.”

Russia’s Ekaterina Riazanova and Ilia Tkachenko capped off a successful day for Russian Ice Dance with their fourth place finish. The National bronze medalists looked confident and smooth in their waltzy Godfather program. The two step sequence gained a level two, but the other elements were a level four. The team from Odintsovo amassed 157.77 points overall.

“We are glad we finished with the competition, and we’re happy with our programs here,” said Tkachenko. “We have to check the marks to see the levels we got. We will move to Detroit soon and work hard, but it will be fun to work with the team (Shpilband) there. We will keep the programs the way they are and focus on practicing technical elements and expression.”

Great Britain’s Penny Coomes and Nicholas Buckland pulled up one spot to fifth at 152.95 points with a fast paced routine to British electropop music, Basement Jaxx vs Metropol Orkest. Their whirling lifts were a highlight and the team actually had, together with Tanja Kolbe and Stefano Caruso of Germany, the highest technical base value.

“We’re really pleased with that,” said Buckland. “The Grand Prix season was very hit and miss for us because Penny dislocated her shoulder in September. Since Nationals, we’ve really had a chance to train hard and give the program some mileage, put it in front of audiences and judges. The aim was really to get the levels and then the rest would take care of itself.”

“Robin Cousins (British Olympic gold medalist) helped us pick it (the music) after we took part in the Olympic Torch Gala,” offered Coomes. “He came to Nottingham and cut it for us so he really helped out. Now we’re going home for a week, and then to compete in the Bavarian Opens as we have missed a lot of Senior B assignments (due to injury). We want to get the world ranking points for next year.”

Nelli Zhiganshina and Alexander Gazsi from Germany entertained the crowd with their “Zombies” program to finish sixth at 147.28 points. They were a little slow, however, which cost them on the GOEs and left some points on the table with level-two footwork.

“It was hard to skate today,” admitted Zhiganshina. “I think it was too warm in the rink. The program wasn’t bad, but it didn’t work out the way we wanted it.”

“It was very warm today,” agreed Gazsi. “The warm temperature slowed us down. We are not satisfied as we wanted to improve, and the English team left us behind, especially in the technical marks. But the audience was happy, and the biggest success was when we saw the other skaters watching and enjoying our program.”

Julia Zlobina and Alexei Sitnikov of Azerbaijan slipped from fifth to seventh when Sitnikov fell during the circular step sequence (144.83 points). They were so upset that they refused to comment in the mixed zone.

Germany’s Kolbe and Caruso came back strong from a tough year that first saw them splitting up for a couple of months after the 2012 Europeans and then missing competitions due to injury. Their romantic dance to Beethoven’s Last Night included six level four elements and two level-three footwork sequences. The German-Italian duo was a strong eighth with 147.38 points.

“We liked to skate here today. After the first few steps went well, we could enjoy our program,” said Kolbe. “We took a big step forward when (Barbara) Fusar Poli joined as coach as she has been competing herself not such a long time ago. Next year, we hope to have more time practicing and to take another step forward.” .

Kolbe and Caruso actually train together with Charlene Guignard and Marco Fabbri of Italy, who switched places with them and came in ninth. Fabbri stumbled on a twizzle, but the rest of their program to Four Seasons went well. Still, the team was unhappy.

“Of course, we are not happy with how things went tonight,” said Fabbri. “We can do much better. Even seeing we got our new season’s best didn’t lift our spirit.”

Pernelle Carron and Lloyd Jones of France finished 10th with a nice performance of their dance to La Chanson des Vieux Amants by Jacques Brel. Their stationary lift with him spinning in a low position was a true highlight (140.00 points).

“We’re happy with how we skated whatever the marks are,” said Carron. “We have been trying to please the judges and now we have decided to please ourselves. We created this choreography because we were looking for something different. It matters more to us that people who watch us love it and everyone has said they love this program.”

“Marika (Humphreys-Baranova, coach) brought new things to the program,” pointed out Jones, “like the twizzles which are built on the music, not just done the fastest you can down the rink. You won’t see anyone doing the same lifts as us. Some couples play it safe. They all do the lift with the boot to the head, we don’t.”