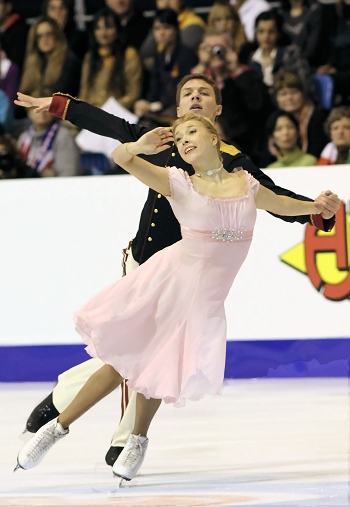 Ekaterina Bobrova and Dmitri Soloviev of Russia clinched the lead in the Short Dance as the 2013 ISU European Figure Skating Championships opened in Zagreb, Croatia, on Wednesday.

Russia’s Elena Ilinykh and Nikita Katsalapov are a close second ahead of Italians Anna Cappellini and Luca Lanotte. All three teams posted a new season’s best.

Bobrova and Soloviev delivered a strong performance of their romantic-classical Polka and Waltz to Put in a Good Word for the Poor Hussar and The Crew.

The dance was characteristic and smooth, but Bobrova had a slight wobble on the twizzles. The twizzles and the side by side footwork garnered a level three, but the two Yankee Polka patterns and the straight line lift were a level four.

“I wobbled somewhat on the twizzle, but I did them and the coaches said it shouldn’t affect the level, but as you can see you are punished for the tiniest things,” Bobrova later told the press.

“It was one of our best performances but not the very best,” observed Soloviev said. “I see we got a level three on the twizzles, and we are not happy about that, but we are very pleased to have a level four for both Polka sequences for the first time this season. We’ve worked really hard on the Polka.” Soloviev said.

The European silver medalists pointed out that they don’t think about being in the role of the gold medal favorites with the withdrawal of 2012 European Champions Nathalie Pechalat and Fabian Bourzat of France.

“Actually, we were looking forward to competing against them as it is always interesting to compete with strong teams,” Soloviev commented. “We wish them a speedy recovery.”

Ilinykh and Katsalapov’s Uzbek “Andijan Polka” was very energetic and featured three level four elements: the twizzles, the first Polka part and the rotational lift. The second Polka sequence and the side by side circular steps were awarded a level three. The 2010 World Junior Champions scored 68.98 ( 34.29/34.69) points.

“We skated well,” Katsalapov noted. “We love our short program and we are happy with how we skated. There were a few small things I would have liked to perfect – perhaps it was noticeable to the audience, perhaps not.”

“It is very warm out there and hard to breathe, but the ice is good so we were able to skate well,” he added. “The crowd was amazing, and we would like to thank our fans for their support. We want to fight for the gold medal at these Championships.”

The team was especially happy with having achieved a higher level for the Polka than in previous competitions this season.

“We got level twos before, but we’ve focused a lot on the technical aspect of the Polka in training,” Ilinykh explained.

Cappellini and Lanotte turned in an upbeat Polka, Waltz and Polka to music from the Seven Brides for Seven Brothers soundtrack and completed level-four twizzles and a level-four rotational lift, but they lost precious points with the Yankee Polka that garnered a level three.

Still, the performance aspect was excellent, and the Italians earned 66.53 (32.86/33.67) points, just slightly above their previous personal best, but hid their disappointment well.

“We are extremely happy with our performance today,” Lanotte commented. “Our goal was a clean program and giving everything to the audience.”

“We had fun,” added Cappellini. “The crowd was cheering and that made it go very quickly. We got a season’s best as well so we are very happy with that.”

Russia’s Ekaterina Riazanova and Ilia Tkachenko came fourth at 64.52 (33.43/31.09) points. Their dance to My Fair Lady included two level-four Polka sequences and level-four twizzles, but the rotational lift got a level three.

“Since nationals, we have worked hard on the polka pattern to make it as best as we can, so we are very pleased with the performance and the levels,” Tkachenko said. “We have great memories from skating in Zagreb back in December (they won the gold medal at Golden Spin of Zagreb 2012), and hope to get to the podium again.”

The teams ranked fifth through seventh are separated by less than one point: Julia Zlobina and Alexei Sitnikov from Azerbaijan (60.93 points), Great Britain’s Penny Coomes and Nicholas Buckland (60.59 points) and Nelli Zhiganshina and Alexander Gazsi of Germany (60.08 points).

Zlobina and Sitnikov picked an unusual Waltz and a fun Finnish Polka. Their twizzles, lift and first Polka part merited a level four.

“We tried our best,” offered Sitnikov. “We trained hard and we were well prepared coming in to the competition, and I think overall that showed on the ice. We chose the music because we want to be different. Two and a half minutes is a long time so you want it to be fun! We always have a nice time in Zagreb and the crowd is always good, and they were especially good today.”

Coomes and Buckland were smooth in their Waltz and Polka as well and picked up three level fours as well.

“I thought it was good but you can never be sure until the scores are out, and now I’m pleased with the skate and with the score,” said Buckland. “It’s the best we’ve done it this season, certainly much better than at the Grand Prix. We had more time to prepare.”

“We skated the Free well at the British National Championships, and if we can perform it better than we did there, we’ll feel we’ve achieved,” he added.

Coomes said that she had dislocated her shoulder earlier this season and as a result, they weren’t quite ready for the Grand Prix.

Zhiganshina and Gazsi picked up a level four for the twizzles, one Polka pattern and the curve lift, but their side by side footwork was only a level two.

“It is very close today, the marks are a bit too high (overall),” said Gazsi. “You cannot give much to a personal best score as at the end of the season the judges tend to give higher scores. Friday we’ll see and we’ll try to get closer to the podium.”

“The one thing we are not really happy about is the fourth element,” he added, referring to the side by side step sequence.

Charlene Guignard and Marco Fabbri of Italy were eighth with 57.63 points, followed by Germany’s Tanja Kolbe and Stefano Caruso (56.54) points. Both teams gave solid performances, but the Italians lost a few points on the rotational lift, which was a level one.

“We skated well overall, but we had a little mistake in the lift when she couldn’t keep her blade close to her head,” explained Fabbri. “That cost us three points, so we’re a little disappointed because it was a stupid mistake.”

Kolbe and Caruso actually had split up last year after Europeans, but reunited in summer.

“Last year, after the Europeans, she (Kolbe) wasn’t happy with our training situation in Milan, and then we split up for a couple of months,” explained Caruso. “Then we missed each other and discussed again our practice schedule. Now we train partly in Berlin, partly in Milan, and partly with Barbara (Fusar Poli), Rene (Lohse) and Martin (Skotnicky), and we can it coordinate very well.”

“Something between us has changed as we’ve found a better relationship,” he summed up.

Pernelle Carron and Lloyd Jones of France round up the top ten with their Polka and Waltz in Western style. They collected a level four for the straight line lift, but one Polka sequence and the side by side footwork were worth only a level two. The French silver medalists scored 55.85 points.

“We’re happy with how we skated,” said Jones. “We did our best; we’re just not happy with our marks. I like to be back in the UK, it’s good to practice at home, and I’m proud of the programs we’re doing, but the marks have been disappointing.”