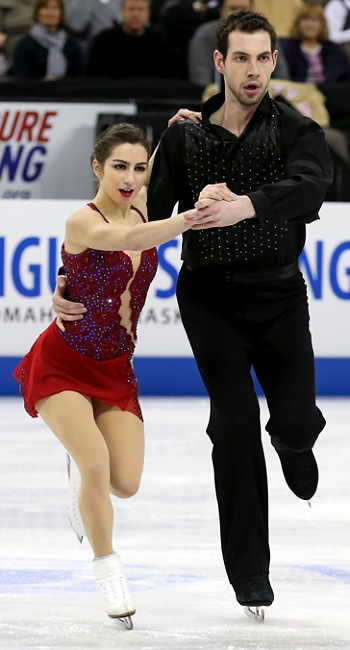 Marissa Castelli and Simon Shnapir perform their Long Program at the 2013 US National Figure Skating Championships.

For all the talk about the depth in U.S. pairs skating, the free skate today in Omaha at the 2013 U.S. Figure Skating Championships sure was exciting. Perhaps the teams do not yet have the skill of the world’s best, but on this day, American pairs seem to be on the right track.

With last year’s champions, Caydee Denney and John Coughlin watching from home while Coughlin nurses a hip injury, a bumper crop of young teams fought for a chance to stand on this year’s podium.

The new champions are Marissa Castelli, 22, and Simon Shnapir, 25, the pre-event favorites by virtue of attrition. Fifth a year ago, the Boston-trained duo looked sharp in the short program, but had to fight their way to the win this afternoon. Though they finished in third place in the free skate, the gold medals are theirs due to a nine-point lead they carried over from the Thursday.

“I don’t think this feeling has sunken in yet,” Shnapir said. “We’ll have to wait and see until tomorrow. I’d like to say congratulations to our fellow competitors. This was a really strong event with great performances. We have great, great pairs skaters here in this event and in this country. Congratulations to everyone.”

Skating a sensual tango to Julian Plaza’s Payadora, the team opened with a solid triple twist lift, and then hit a set of shaky triple toe loops. Later in the program, Shnapir fell out of their flying camel spin, and stood center ice dumfounded as Castelli completed the element.

“We’re very excited today that we were able to hold ourselves together after a mistake in the middle of the program,” Castelli said. “We’re just really happy.”

Shnapir added, “That was a very interesting feeling. You know, things like that happen obviously. I stopped, and I took a second just to regroup.”

“Marissa and I have trained so hard this season, and we’ve prepared so much with so many run-throughs,” he added. “Even though we don’t necessarily plan how to regroup after missing a side by side spin, for instance, I think that we train to be able to get back together, take a second, and push to have a stronger second half than first half.”

The gold medalists scored 118. 34 points in the free skate, and 180.61 points overall, eclipsing their personal best scores by more than ten points each.

“We’ve definitely been training the whole season and planned on being in this spot and challenging everyone,” Castelli said. “We had a little bobble in the free skate but overall, this season has been the best for us.”

The winners of the free skate, Alexa Scimeca, 21, and Christopher Knierim, 25, train with Dalilah Sappenfield in Colorado Springs with Denney and Coughlin, and have only skated together since last spring. The duo skated a technically solid performance to the soundtrack from the film Life is Beautiful to capture the silver medals.

“This was a great event with a lot of strong teams. Everyone showed up,” Knierim said. “We’re really excited about our performance. It’s the first time that we put this program out in competition since we changed it. We put it all out there, and put out a good performance, and we’re really happy about that.”

Scimeca and Knierim landed two throw jumps—a triple flip and a triple loop that received negative grades of execution, as well as a set of triple Salchows and a double Axel-double Axel sequence. Where the duo has work to do is on the component side, failing to match the scores of the winners.

“That was one of the reasons we changed (our free skate),” Knierim said. “We had like an eight-point jump from NHK (Trophy) in those scores, although there is always room for improvement on those skills. We’re going to continue to get better and better in that respect, but I think that we’ve already made a lot of improvements.”

The silver medalists scored 119.96 points for their winning free skate, and 172.75 points overall.

Finishing in third place was the second-year team of Felicia Zhang, 19, and Nathan Bartholomay, 23, who were the last to skate, and would have won had the audience judged the event. The Florida-trained duo were clean as a whistle in their West Side Story program, scoring 118.83 points in the free skate, and 172.02 points overall.

“We’ve been training and it was really refreshing to come out at a national program and throw down one of our better programs,” Bartholomay said. “It doesn’t even matter what color the medal is, we are just so excited to have proven we belong here.”

Zhang and Bartholomay checked off their elements with ease, landing a set of triple toe loops, a double Axel sequence, and two triple throws—a Salchow and a Lutz. Like the silver medalists, the duo has some work to do on the component side of their skating, a challenge that they are up for.

“We have competed since May of 2011, so we’re a pretty new team,” Zhang explained. “The past not even two years we have been punching out unison, choreography, transitions and just working on timing of jumps and throws during our time together as a team.”

Bartholomay added, “You would think for a new team we would want to work the elements very hard, but it is everything else. The connecting. If you don’t have a look doing your tricks, you could be clean and score less.”

Lindsay Davis, 20, and Mark Ladwig, 32, moved up from fifth to finish with the pewter medals with 165.08 points. The first-year team skated a sedate and elegant program to Angels and Demons by Hans Zimmer, and made no major errors. Davis was especially strong in the throws, while Ladwig continued his legacy of strong overhead lifts, earning level four for each of them in the program.

“I did actually make a bobble in the double Axel, but for the most part I would say it was pretty clean,” Ladwig said. “That is our real goal here and then we’ll be satisfied with whatever comes.”

Haven Denney and Brandon Frazier slipped from fourth to fifth place overall with a strong debut on the senior level. The 2012 U.S. junior champions showed promise in their La Strada program, and finished with a respectable 162.27 points.

“For first year senior it was nice to pass the 100-point mark. It was a very good training season coming up to the nationals for the last month and a half,” Frazier explained. “Overall, we can go home and say we gave it our all. There is always room for improvement. I know that while we are glad it is done, we are excited to get back to work.”

It was later announced that Denney/Coughlin, who officially petitioned for consideration to be named to the World Championships team, will be joining Castelli and Shnapir in London.

The following teams were selected to compete at the Four Continents: