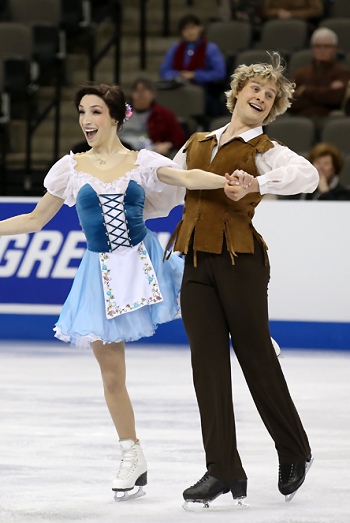 Meryl Davis and Charlie White perform their Short Dance at the 2013 US National Figure Skating Championships.

As expected, 2011 World Champions Meryl Davis and Charlie White are at the top of the leader board, scoring 79.02 points with their Giselle-themed program.

“We were really pleased with our short dance today,” Davis said. “We have really been evolving our overall comfort on the ice, our speed, (and) our energy since the (Grand Prix) Final, so I think it really paid off in our performance today.”

Davis, 26, and White, 25, were nearly perfect in their program—earning the all-important level four for each of their scored elements, and received average scores of 9.68 to 9.96 on their program components.

“We’ve worked hard since the Final on all of our elements and our speed, especially on our short dance,” White explained. “The key points in the polka are so important, so we really placed emphasis on that, and we’re very pleased with how that went. I haven’t been able to take a look at our scores yet, but it is definitely a season’s best, and we will continue to work to improve for Four Continents and Worlds after that.”

Should they capture the title tomorrow, Davis and White will become the sixth team in history to win five U.S. ice dance titles.

“We don’t want to get ahead of ourselves—we still have to do a great job tomorrow,” Davis said. “Five titles has been the record in ice dance so far with Liz (Punsalan) and Jerod (Swallow), Tanith (Belbin) and Ben (Agosto), Naomi (Lang) and Peter (Tchernyshev), and Judy (Blumberg) and Michael (Seibert) [Editors note: Judy Schwomeyer and James Sladky also won five titles], so we’re hoping to join that prestigious company, and it would be an honor.”

Finishing in second place was Madison Chock and Evan Bates, who were fifth in this event last a year ago—their debut at this competition as a team.

Chock, 20, and Bates, 23, skated to Cirque de Soleil’s Quidam in their routine, and like the leaders, earned level four on each of their elements. They earned a personal best 70.80 points in the competition.

“I really enjoy doing the short dance, and it has been a great change for ice dance,” Chock said. “The audience can be more involved, and I think that they can watch the short dance and free dance more than they could the compulsories where everyone was just repeating, repeating, and repeating. It’s more fun for us, too, to have just these two programs.”

Maia Shibutani, 18, and Alex Shibutani, 21, second in this event the last two seasons, are in a surprising third place. The siblings have struggled of late—finishing in eighth place at the 2012 World Championships after medaling in their debut in 2011, and failed to qualify for the Grand Prix Final after an uneven fall season.

Skating to music by Incantation, a London-based tribal/South American music band, the duo received a level three for their circular steps, and received a one-point deduction for an extended lift.

“We’re very pleased with our performance today,” the younger Shibutani said. “We’ve been working really hard on the short since the Grand Prixs, reworking some of the elements, but we’re really happy with how the flow went today. We had a little problem with the lift, but we thought it was a good first program for the second half of our season.”

Her brother added, “To clarify on the lift, I just got a little bit excited, and I just wanted to keep lifting her, but overall the program went really well today.”

Madison Hubbell and Zachary Donohue finished in fourth place with 67.75 points, and are searching for their second consecutive podium finish in the event. The duo received level four on all but one element—their midline no touch step sequence, for which they received a level three.