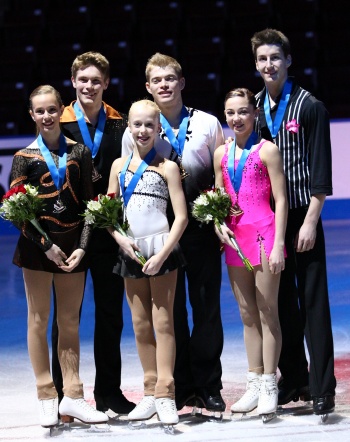 Canada may have low numbers in the pairs ranks this year, but the talent is apparent at the novice level where all three medalists delivered close-to-clean programs at the 2013 Canadian Tire National Figure Skating Championships.

The top two teams were neck and neck after the short program, but it was Rachel Dobson and Alexander Sheldrick (WO) who emerged from the free skate with the gold medal. Judith Murtha-Anderson and Trennt Michaud (EO) finished second, followed by Taylor LeClaire and Christopher Mostert (AB/NT/NU).

Aside from a scary catch on their huge twist lift, Dobson and Sheldrick’s program to music from August Rush was clean and full of strong lines. Their final score was 100.72 points.

“We can’t say we weren’t thinking about it [coming from behind to win],” Sheldrick said, “but we were trying not to. Our timing was a little off on the twist, but eh, stuff happens. I had her.”

The pair only got together last year and have a nine-year age gap between them (Dobson is 13, while Sheldrick is 22), but the partners appear to get along well, standing for an interview with their arms around each other’s backs.

“I wanted to get into pairs last year, and when I switched clubs, Alex was at that club,” Dobson explained.

“We started to do things for fun so she could learn pairs,” Sheldrick added. “It took off from there. It just clicked.”

Murtha-Anderson and Michaud dropped to second overall, but they were still happy to bring home the silver medal.

“It feels really good,” 15-year-old Murtha-Anderson said. “We wanted to be on the podium here. We had personal best scores for both programs, so we were really happy about that.”

Murtha-Anderson and Michaud looked a bit cleaner overall than in the past, and presented with a bit more polish, a testament to the amount of time that they have spent skating together. However, they did not garner as many points with the levels, accounting for the 2.5-point gap (98.16).

“I was a little nervous at the beginning,” Michaud, 16, admitted, “but as the program gets going, you get more into it. We just wanted a personal best, and then see how it goes. It went pretty well, the way I see it.”

LeClaire (15) and Mostert (17) were thrilled to win the bronze medal (92.60), a feat even more impressive considering that it came less than two hours after LeClaire finished her novice ladies free skate. Mostert is also competing in singles at these championships, but his junior men’s event will begin tomorrow.

The team sold their peppy Irish program all the way through and skated without any major errors, including landing the only side-by-side double Axels of the competition.

Kendra Digness and Eric Thiessen (AB/NT/NU) made a strong comeback in the free skate to finish fourth (85.34).

Robyn-Lynn McGrath and Matthew Power, the fifth-place finishers (84.11), are two of the only skaters in the competition to hail from Newfoundland and Labrador.