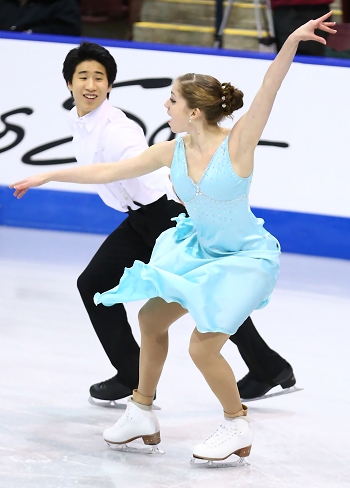 Canada probably has more depth in junior dance than in any of the other junior disciplines, and the junior free dance event at the 2013 Canadian Tire National Figure Skating Championships lived up to expectations on Thursday evening.

Madeline Edwards and ZhaoKai Pang (BC/YT), last year’s silver medalists at this level, moved up from their second-place standing after the short dance to capture the gold medal.

Edwards and Pang’s total score of 145.25 was the highest total achieved by a Canadian junior team since the introduction of the short dance.

“We are so excited,” Edwards said after the competition. “We feel like we’re on top of the world.”

“We always get a little bit nervous in a competition—it doesn’t really matter which competition it is,” Pang said, “but over the years, we’ve learned how to handle it pretty well.”

Their free dance to The Artist received the biggest cheers of the night, and the youngsters portrayed the bittersweet moments of the movie’s storyline with exceptional maturity.

Edwards and Pang delivered the elements with excellent precision as well, earning a majority of +2 Grades of Execution (GOE) marks from the judges. The rotational lift in the last minute of their program, the last major element, simply put an exclamation point on the end of an outstanding competition for them.

Edwards (16) and Pang (17) are likely candidates for the Junior World Championships team, but that announcement will not be made until Sunday after the conclusion of the senior free dance. Until then, they are looking forward to one more event at this competition, the opportunity to skate in the gala.

“We’re so excited. To be able to skate with the senior national champions is so cool,” Edwards said.

Bent and MacKeen made the final moments of the competition extremely intense as they did their jobs and delivered a clean tango free dance that was well-balanced with both attack and polish. It was a close decision, but they came up just short of Edwards and Pang in both the technical and components portions of the scores (83.87 (43.34/40.53)), resulting in a silver medal, their first at the junior level.

“We skated really well,” Bent said. “It was just what we wanted. The expression, like we’ve been working on, came out, and all around it was a really good program. I’m happy with it.”

Bent (15) and MacKeen (18) had done a tango free dance several years ago, but that was long before they had developed the strong connection that they now have. To be able to explore this type of program once again was an experience that they were glad to have.

“It was our coaches’ pick and we just went along with it at first, but we really got into it.” MacKeen said. “It’s a tough tango.”

The intricate steps and strong execution certainly helped them to establish a gap of 15 points over the next closest finishers.

“The feeling of getting off the ice and knowing that you skated the way that you wanted to is really nice,” Bent said.

After two years of close calls, Dalmer (15) and Firus (18) finally walked away from the Canadian Championships with medals around their necks. The new bronze medalists were elated with the way that they held up under pressure this year, especially after faltering at Challenge last month.

Their free dance to Cats had plenty of sharpness and confidence, and the teenagers showed no sign of being worried about maintaining their third-place ranking after the short dance. Last month, the duo was on the way to a bronze medal at Challenge when a timing problem made their final rotational lift come down.

Victoria Hasegawa and Connor Hasegawa (QC), fourth after the short dance, stayed in fourth in the free dance (70.96) and overall (123.18). They had difficulties on the twizzles and the second lift, which managed a level 4, but was sticky on the position change. However, they were pleased with the way that they presented their free dance to Memoirs of a Geisha, as well as the way that they approached the competition.

Sixth after the short dance, Mariève Cyr and Benjamin Brisebois Gaudreau (QC) were able to move up to fifth overall (119.67), nearly eclipsing the Hasegawa siblings in the free dance portion.

Although Cyr and Brisebois Gaudreau also had some technical problems, including a hiccup on the spin (an element that is normally very strong for them), their classical free dance made an impression. It is rare that Beethoven’s Fifth Symphony is seen in ice dance, and choreographer Shae Zukiwsky really created a memorable piece of work.