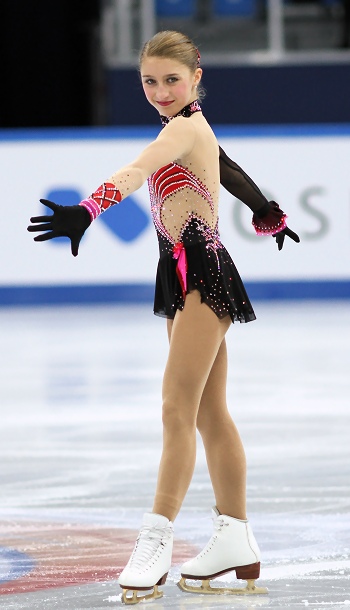 It has been an exciting year for USA’s Hannah Miller. The 2012 U.S. junior bronze medalist qualified for and medaled at the Junior Grand Prix Final of Figure Skating in Sochi, and is looking forward to competing at the upcoming 2013 U.S. Figure Skating Championships in Omaha, Neb., where she will make her championship ladies debut.

Consistent performances have kept Miller in the hunt at every event she has entered, making her an intriguing character in a very strong group of ladies who will face reigning champion Ashley Wagner later this month in Omaha.

Thus far, Miller has been replete with silver medals—she won her first at the Junior Grand Prix event in Linz, Austria, behind Russian phenom Elena Radionova, and followed it up with another in Zagreb, Croatia, behind teammate Angela Wang. The two medals earned the high school sophomore an entry into the six-lady field at the Final in Sochi, where she won yet another silver medal.

“This season has been full of thrills and pure excitement,” Miller said. “The Final has been a goal for me all year long, and just getting to compete there was a huge accomplishment. I knew to get a spot in Sochi that I would have to do well at my two events, and that is all I set out to do.”

“I went into Austria very confident and I just wanted to put out two solid skates,” the 16-year-old said. “I was over thrilled to skate well and come home with a silver medal. Croatia came up fast and I had the same goals as Austria. I didn’t skate as well as I wanted to, but it was good enough to secure another silver medal and a spot in the Final.”

Miller was in awe of competing alongside her senior counterparts on what will one day be Olympic ice at the Final in Sochi, but she knew that she had her work cut out for her if she were to keep her string of podium finishes in tact.

“Heading to Sochi was a dream come true,” said the Michigan native. “I knew I was an underdog going in, being the only one without a triple-triple jump, but I know I possess other qualities that could push me to the top. All I could ask of myself was to skate as well as I could perform with my heart. The week leading up was very exciting. I was skating well and just gearing up to compete.”

“After my short I was speechless,” she recalled. “I did everything in that program that I wanted to do. The long came and my practice was a little shaky, but I shook it off and skated with full confidence. My coach told me to skate with my heart and that is what I skated out on that ice to do. I had a lot of fun skating my program and I fulfilled all of my expectations. After that, it was up to the judges. My score came in as a new season’s best and put me into second. I was a breath taken, and I couldn’t ask for more.”

Miller has been skating since the age of four—a natural thing for the daughter of a hockey player. Her father, Kevin, was a member of the 1988 U.S. Olympic Team, and played several seasons in the National Hockey League. She has trained seriously for the past eight years.

“I skate before school, taking one online class that allows for this,” explained Miller, who trains six days a week. “After that, I go to school, and then skate again from 3:30pm to 5:00pm. I also take a “leaps and turns” class, modern dance, and I work out with a personal trainer. I skate and work out on Saturdays, and I talk to a sports psychologist weekly.”

Miller trains with her paternal aunt, Kirsten Miller-Zisholz, at the Lansing Skating Club in East Lansing, Mich., and works with choreographers Daniil Barantsev and Tanith Belbin.

“My coach (Miller-Zisholz) is responsible for my overall training,” she said. “Daniil and Tanith play a very important role in developing and perfecting my programs. My personal trainer, Rebecca Klinger, makes sure that my physical fitness and training schedules match my competition schedule, and my dance instructor is Kathryn Benacquisto-LaPorte. My sports psychologist is Carolyn Silby and Dave Carrier is my sports medicine trainer.”

Miller works with Silby to increase her mental toughness.

“The challenge of being expected to compete well all year is hard for everyone,” she explained. “Everyone has their ups and downs, and no matter what, when it is time to compete, you have to go out there and do your best. It is hard work. You get one chance for each program to put out the best skate that you can. The pressure and nerves are hard to handle, but good athletes know how to control them, and that is something that I will always be working on.”

Since returning from Sochi, Miller has turned her focus to training her senior programs for her U.S. Championships debut. However, she is not planning anything drastically different from what she has already showed in her junior programs.

“Nothing major is being added,” she explained. “Of course I am training my senior (free skate) so that I can increase my comfort with that program. Beyond that, I am working on increasing my speed and consistency, as well as my triple-triple.”

The preparations for Omaha have gone all the back to the summer when Miller worked hard to create new programs for this season.

“We chose music that is more mature than anything that I have skated to in the past,” Miller said of her short to Mayor’s Tanguera and long to Havasi’s The Storm. “Stepping up to the senior level presented a large challenge, and my coach and I worked really hard on my speed and body movements to [take] that step, and we are trying to continue the improvements.”

Miller has also been working to improve technical elements in her skating as well.

“Jumps and spins are always a work in progress,” she admitted. “Everyone always wants them bigger, faster, and stronger. I have been working hard on the consistency of all of my jumps, also on the speed going in and flow coming out. My spins are all level fours, and I always try to maintain the quality of them.”

In Omaha, Miller hopes to perform well enough to qualify for the World Junior Championships in Milan, Italy.

“It is a big goal of mine, and I would be honored to be selected,” she admitted. “I think that it would be a big step in my career.

Miller has three younger sisters—Neysa, 14, who plays hockey and is on her father’s U16 travel team, and 11-year-old twins Braedyn and Giselle, who both participate in figure skating. Braedyn is also a level five gymnast, while Giselle plays basketball and is active in performing arts. Mother Cheryl coordinates the family’s very busy schedule and drives the siblings to their various practices with help from her husband.

Miller is a student at Williamston High School where she is enrolled in the Math and Science Academy. Outside of skating and school, she likes to hang out with friends, go snow boarding, and read.

“I like to volunteer at the local animal shelter where I donate necessities and my time,” she added.

Miller also has her eye on the 2018 Winter Olympic Games in Pyeongchang, South Korea, and it might be serendipitous that her name in Korean translates to ‘one’.

“The 2018 Olympics is definitely a goal of mine, and that is what I am striving for,” she said. “We will just have to wait and see where I go in my career.”