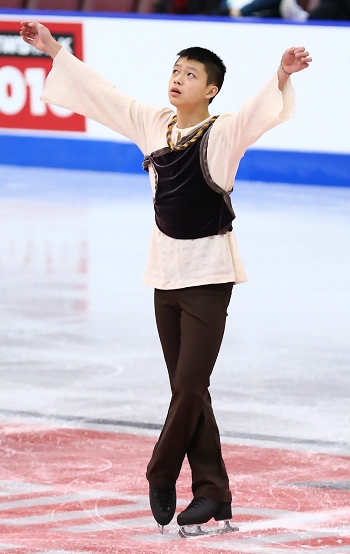 The junior men’s event closed the junior portion of the 2013 Canadian Tire National Figure Skating Championships, and once again, another 2012 Canadian novice champion made the leap to the junior podium.

Anthony Kan of Central Ontario was able to translate his success between levels, winning the gold medal. Denis Margalik (CO) maintained second to win the silver, while Mathieu Nepton (QC) came from fifth place to capture the bronze.

Kan’s free skate to Gethsemane was not without problems on a few jumps, although he did manage to stay upright. His combination in his short program was a triple Lutz-triple toe loop, but he only did a triple-double in his free skate and knows that he has opportunities to upgrade that program.

Overall, the 17-year-old is pleased with his effort and is glad that he was able to achieve his goal of winning the junior title.

“It’s a step up,” Kan said. “It feels really good. I was a little nervous going in. I only had a two-point lead, so I had to have a winning long, or close to a winning long.”

The competition was close, but Kan managed to edge out fellow Central Ontario representative Margalik.

Margalik’s tango free skate provided a contrast to Kan’s dramatic, lyrical style. The 15-year-old clearly paid a lot of attention to the choreographic details in his program, but he did appear to be thinking through some of the more difficult steps.

Despite a fall on his final double Axel, Margalik appeared very happy at the end of his free skate, which was one of his published goals for the season.

Nepton was the 2011 Canadian novice silver medalist, but missed last year’s competitive season. He was able to fight back from a fifth-place short program to win the bronze medal this year at the junior level (149.90).

Nepton’s Eastern-tinged free skate had plenty of style, and he looked to be on his way to a major comeback after an excellent triple flip-triple toe loop combination. Unfortunately, it seems like he changed his program on the fly as he did a third double Axel in combination with a triple toe loop. As a result, the entire element did not count, or otherwise he may well have challenged the gold and silver medalists.

Leslie Ip (CO) placed fourth in the long (94.31) with his free skate to Phantom of the Opera, which was a good match for his lyrical style, but a fall on a combination spin contributed to the overall effect of the program. The 17-year-old dropped from third to fourth overall (148.18), missing the podium by just under two points.

Jack Kermezian (QC), like Margalik, also chose a tango for his free skate, though his was not as intricate in the footwork. He struggled with some jumps, including singling a planned double toe loop in combination and bailing on an attempted double Lutz, but he showed great fight in his program.

He finished with a strong double Axel, a complicated combination spin, and excellent level four footwork, finishing fifth in the long (91.23) and overall (141.01).