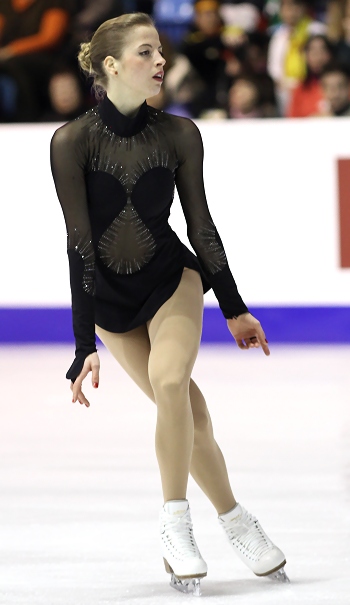 World Champion Carolina Kostner of Italy returned in style to the major international scene by claiming her fifth European title as the competition concluded at the 2013 ISU European Figure Skating Championships in Zagreb, Croatia, on Saturday.

Russian youngsters Adelina Sotnikova and Elizaveta Tuktamysheva earned the silver and bronze medals.It was the first time since 2006 that the Russian Ladies stood on the podium at Europeans.

Kostner had sat out the Grand Prix series as she wanted to start later in the season, and the break refreshed her.

The Italian put out an exquisite program to Bolero by Maurice Ravel that featured a triple Lutz (a jump she hasn’t done in competition for the past few years), double Axel, triple flip-double toe, a beautiful triple loop, as well as a triple toe-double toe combo, and three level four elements.

The only glitches came at the end when she grew tired and doubled the two Salchows. One of them comes right at the end in the very final seconds of the program.

“I had a wonderful first three minutes of my program,” said the 25-year-old. “I thought I was on the way to the skate of my life. Then I got slammed back down to earth and I realized my program is very hard and I need still to do a lot of work to do all the choreography I want. This is my challenge and the reason I skate.”

“Somehow they (European titles) have all been quite difficult, but this was really hard,” Kostner observed.

“The two girls sitting beside me are very, very strong and I know that technically I may not be as strong as them,” she commented, referring to Sotnikova and Tuktamysheva. “I have to do my best to be able to sit here and I was able to do that and it was a hard one.”

Sotnikova skated next to last, but the 16-year-old dealt very well with that, as well as with the pressure of being in the lead.

Performing to At Last and the Burlesque soundtrack, she underrotated the back end of her triple Lutz-triple toe and once again popped the flip, but then she pulled herself together and made no further error. The Muscovite landed a triple loop, double Axel-triple toe, triple flip-double toe-double loop, and triple Salchow, and her beautiful spins all merited a level four as did the upbeat straight line footwork.

“You could say I am fairly happy,” said Sotnikova. “I did everything I could except that horrible triple flip! I popped it again. Apart from that it was fine. There are things that could be improved, but now isn’t the time to talk about that. The only mistakes I made were technical, I had no psychological problems.”

“I was completely calm going into the program,” recalled the 16-year-old. “I didn’t feel any pressure skating in the last group. I just forgot about yesterday and focused on today. It’s my first European Championships and I have a silver medal – it’s like a party day for me now.”

Partying for her includes eating sweets. “I might even have some chocolate to celebrate. It will be a little treat for me!”

However, it was Tuktamysheva who delivered the best technical performance of the night.

The 16-year-old completed a triple Lutz-triple toe, triple Lutz, flip, double Axel-triple toe, triple Salchow-double toe-double loop, another triple loop, and double Axel. Two spins garnered a level four, while the layback spin and the footwork were a level three. The elegant program to Dark Eyes made the skater look more grown up, but her components still didn’t match Kostner’s.

“I had a totally different approach today,” explained the 2011 World Junior silver medalist. “I was in a different mood to yesterday. I don’t know if it was visible, but I was more sure of myself, more confident, and my legs were stronger. I was much better set on my triple-triple. I tried to set the mood from the start and show more energy than yesterday.”

“If I skated like that yesterday, it would have been even better and I think it’s important to show that even if the short program isn’t so good you can fight back,” she added.

Like Sotnikova she was unfazed about competing in her first Europeans.

“Each competition means experience,” noted Tuktamysheva. “It doesn’t matter what it is. If it’s the Europeans or the championship of your city, with each competition you gain more experience.”

Valentina Marchei of Italy was a strong fourth at 171.06 points. Skating to The Artist soundtrack, she hit three good triples, including a double Axel-triple toe combination, but the second Lutz was shaky (and she added just a single toe to it) and the second Salchow was underrotated.

“I am very happy with how I skated tonight,” said the 26-year-old. “I showed everything I do in practice.”

The Italian coped well without her regular coaches Yuko Sato and Jason Dungjen who were at U.S. Nationals.

“Whenever I come to Europe to train, I am with the Italian team, with Franca Bianconi, and she takes good care of me,” Marchei said.

Sweden’s Viktoria Helgesson repeated her fifth-place finish (155.72 points) from last year, but she singled her flip and Salchow. However, four of her triples were clean.

“I’m not really happy,” stated the 24-year-old. “I did some stupid mistakes with the flip and the Salchow and I missed a combination. Some parts were really good, but I can’t be satisfied. Skating last was a little bit hard because it is very warm here and so it took a lot of energy.”

Nikol Gosviani of Russia was ranked 12th in the short but overtook six skaters to place sixth with 154.41 points. The skater from St. Petersburg landed a triple flip-triple toe and four more triple jumps, but stumbled on a doubled Lutz and a singled Axel.

“I didn’t manage everything but I’m pleased,” said the 16-year-old. “I was a bit nervous coming in to the free program, but not noticeably more than usual. I knew what I wanted to do and I did it. I had no doubts in my mind. Mostly I just noticed the noise from the crowd in the tribune, they were making such a huge noise.”

“Now we have to go back and work harder,” she added.

Gosviani doesn’t know yet if she will be selected for the World team. The Figure Skating Federation of Russia has still to consider whether or not to give World silver medalist Alena Leonova a chance.

Sonia Lafuente of Spain was probably inspired by the success of teammate Javier Fernandez to raise from 11th to seventh at 152.29 points. Her West Side Story program included a triple flip and Lutz. Only a triple loop was wobbly.

“I have had a hard time training for Europeans,” said the first Spanish skater to medal on the Junior Grand Prix (2006). “I have had massive problems this Christmas. I had a stomach upset and couldn’t eat for a week and we lost a week’s training because I had no energy. I recovered pretty well although I’m a bit tired, but I knew how to concentrate myself and where to save energy to have more for the end of the program. And I’ve had two personal bests.”

“I was here for Javier’s performance,” Lafuente shared. “We were all crying. It’s a really, really good day.”

Joshi Helgesson came in eighth, meaning that she and her sister Viktoria secured three spots for the Swedish ladies for next year (150.40 points). Helgesson stepped out of a triple loop and Lutz and overall looked a bit slow.

“I know I can do better but I’m happy with my short program,” said the 19-year-old. “I’m not happy with the double toe after the triple Loop. I’ve had some issues with some of my jumps in the last weeks. I haven’t seen the levels yet, but I think the steps and spins were good.”

Nathalie Weinzierl of Germany fell on a triple toe and a double Axel, but nailed two triple Lutzes and a triple flip to place ninth, a big improvement over her 22nd place in 2012 (147.52 points).

“Of course I’m happy to make the top ten, and I’ve qualified for the Worlds,” said the 18-year-old. “I went into the program more tense than yesterday, especially after I fell on the Lutz during the warm up. The first Lutz in the program didn’t feel right in the air, but in the landing I managed to save it. When I messed up the (three jump) combination, it was clear I had to catch up and repeat it somehow.

“You cannot waste points as half a point could make a difference, and it did,” she explained, referring to the fact that she was just 0.38 points ahead of France’s Mae-Berenice Meite.

Meite struggled with the flip in her Arabian program, touching down on the first one and doubling the second, but produced three clean triples to finish 10th (147.14 points).

“It was not so bad, not the best I can do, but it was certainly better than yesterday,” the 18-year-old commented. “I want to do it and enjoy it and that’s what I’ve done today. Even if the points aren’t the best, I’m happy to skate it. I wanted to show everyone the work I’ve done all these months and I think I’ve done that a little today. Now I must just keep working on it for Worlds. I hope to go.”