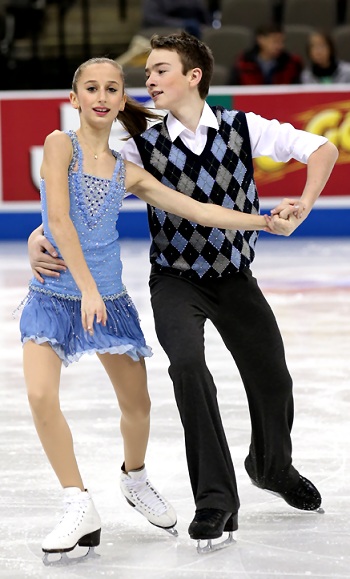 Chloe Lewis and Logan Bye perform their Free Dance at the 2013 US National Figure Skating Championships.

The novice dance podium was decided this morning at the 2013 US National Figure Skating Championships, with 12-year-old old Chloe Lewis and 14 year-old Logan Bye moving up from second place in yesterday’s pattern dances to win the title in a tight race.

The duo, who finished in fourth at last year’s competition, skated a charming routine to music from The Artist soundtrack.

“I’m just so happy. It’s the best feeling in the world,” said an ecstatic Lewis. “A lot of training and a lot of run-throughs even when you didn’t want to. Suddenly it was all worth it.”

“I think honestly going into this competition, our goal was to win,” Bye admitted. “It was our dream.”

The champions garnered level fours on each of their lifts as well as their dance spin, and level threes on their twizzles and circular steps. Lewis and Bye plan to test up to the junior level for next season.

The Colorado Springs-based duo have skated together for a little more than seven months, and were excited to be able to earn a spot on the podium.

“For our first program—especially a free dance that we have ever done at a national championships, that’s as good as we honestly could have done,” Johnson said. “Just making the podium at all is really cool.”

Pastis and Johnson scored 56.69 points for their Sentimientos free dance, and lost ground to the champions on their levels. The silver medalists earned a level one for their diagonal steps and level two for their curve lift, but still managed 100.42 points overall.

“I feel like that everything that our coaches have given us—even the corrections that are a little bit frustrating sometimes, was worth it,” Pastis admitted. “They made us what we are now. We are thankful.”

Sammi Wren, 14, and Alexey Shchepetov, 15, moved up from fourth to win the bronze medals with an angular program to music from Cirque du Soleil.

“I think that we had a really good warm up this morning, and we prepared ourselves really well for the event,” Wren explained. “This week was successful and everything that we had hoped, so we are happy.”

The third place finishers, who train in Ardmore, Penn., earned 95.37 points in the competition.

“Last year we were third in intermediate, and the level of skating among our opponents is much higher,” Shchepetov said. “They are also our friends, so it’s fun to compete with them.”

“We really badly wanted to get on the podium,” the younger Becker said. “We calculated up the scores from Sectionals, and if they held, then we will have gotten fourth. We were going for third or higher, but we’re excited to get a medal.”

Competition continues this afternoon in Omaha with medalists in the novice ladies’, pairs’, and men’s competitions to be decided. The junior ladies will skate the short program this evening.