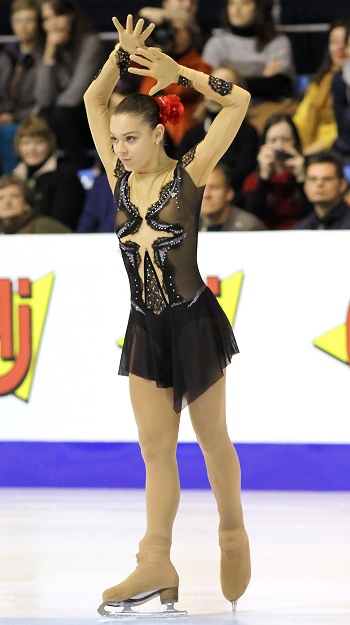 Russia’s Adelina Sotnikova earned the lead in the short program at the 2013 ISU European Figure Skating Championships in Zagreb, Croatia, as the Ladies event opened on Friday. World Champion Carolina Kostner of Italy is standing in second place after a fall, while her teammate Valentina Marchei surprised in third.

It was a high-level competition with many strong performances in which 36 Ladies competed and 24 made it to the Free Skating.

Sotnikova has struggled with her short program all season, but it was her day today and she really sparkled in her dynamic routine to Capriccio Espagnol. The 16-year-old opened with a big triple toe-triple toe combination followed by a solid triple flip and double Axel. She picked up all level fours for her excellent spins and the footwork.

“I am very happy with my performance today. I did everything as planned and hopefully I’ll be able to skate as well tomorrow,” Sotnikova noted. “I have no words at the moment, just such strong emotion. I am so pleased with myself, I am so content.”

“I wanted to really present the program from the very beginning, and during the steps after the elements were all finished I could do this especially,” she added. “I could go fast and enjoy it. At the end, I just wanted to let out all my emotions. I can skate this program even better in practice, with more speed.”

For Kostner, it was her first competition at the major international stage since winning her World title last March. Since then, she only competed at the Golden Spin in Zagreb in December and at Italian Nationals.

The Italian turned in a nice performance of her program to Transylvanian Lullaby and Devil’s Trill that was marred only by a fall on the back end of the triple-triple toe combo. The triple loop, double Axel and the spins were strong, and she collected a level four for two spins and the footwork while the layback spin was a level three.

“Apart from the fall (on the triple toe-triple toe) it was alright, but of course I’m a bit angry with myself,” said the 25-year-old. “Usually I am always nervous at competition. I’m not more nervous now than in the years when I competed at more competitions.”

“It’s a big success to be around in figure skating for eleven years,” added the four-time European Champion. “It makes me happy to do competitions for such a long time, but of course after 11 years it’s more difficult to motivate yourself.”

“I’m not the strongest person in competition,” Kostner observed, “but I like to practice and try to get stronger. I respect every competitor for the work they to. I don’t compete against someone specific. I have a lot to fight with myself. I don’t want to waste energy to compare myself with others.”

Marchei had drawn starting number 34 out of 36. Skating to the Spanish inspired piece Esperanza by Maxime Rodriguez, the Italian landed a triple Lutz-double toeloop, a triple Salchow, a double Axel, and two spins merited a level four. She scored 58.22 (30.45/27.77) points for a new personal best.

“It was my first real clean short program this season,” said the four-time national champion. “I’m very happy because it was very stressful going into it. I did exactly as I was doing in practice – nothing more and nothing less, exactly as planned.”

“I stress myself so much anyway,” admitted the 26-year-old. “I was stressed because I knew I was ready. When you’re in shape, it’s the most difficult to control yourself. You have to not let the atmosphere of the arena and competition stress get to you. I guess (coach) Franca (Bianconi) had a good role in this, because she helped me to calm down and put me back on my feet and feeling comfortable.”

Elizaveta Tuktamysheva of Russia doubled her Lutz, but still added the triple toe for a legitimate combination to come in fourth at 57.18 (29.47/27.71) points. She completed a triple loop, however, the double Axel was wobbly.

“My triple (Lutz-)-triple (toe) combination didn’t work out,” she noted. “I did a double-triple. I wasn’t confident enough going into it. I also made a little mistake on the double Axel. The combination is going well in practice but I felt a little shaky in the warm up, so maybe I grew nervous.”

“Overall I am happy. The most important thing is that I skated with emotions,” the 16-year-old from St. Petersburg commented.

“I will be calmer [for the long] because there is more pressure in the short program,” added the Russian champion. “If you make mistakes, you will be ranked low and maybe can’t move up.”

Sweden’s sisters Joshi and Viktoria Helgesson placed fifth and sixth with 55.04 and 54.77 points, respectively. Joshi hit a triple Lutz “Boitano style,” but stepped out of her triple Salchow-double toeloop combination in her program to Cirque du Soleil.

“It was difficult that (my sister) Viktoria and I had to skate after each other, as we have just one coach,” said the 19-year-old. “I’m always nervous watching her as I cannot help, and want her show her best. It’s easier when I’m skating. I enjoyed the skating and the crowd today.”

Joshi had no seen her levels at the time, but was happy with her performance.

“Apart from a little mistake, everything went well,” said the Swedish Champion. “It would be a good motivation to practice tomorrow in the same group as my sister.”

Viktoria went for a triple toe-triple toe, but the second jump was deemed underrotated. She also almost fell on the triple loop, but the double Axel was solid and she picked up a level four for the layback spin and the step sequence.

“It felt good,” said Viktoria, 24, the older of the Helgessons. “I try to improve little by little with every competition and I think I am doing that. I don’t know what happened (on the triple loop). I need to watch it back. I felt I could have landed it if I had been a bit stronger.”

Lenaelle Gilleron-Gory of France had a strong debut at the European Championships with a clean short that included a triple toe-triple toe, a triple flip and level-four combination spin. The skater from Annecy scored 53.32 points.

“I am very pleased. I was stressed out when I went out to skate but once the music started I got into it,” the 17-year-old said. “It was tough after the French Nationals. I had finished fourth and psychologically it was hard for me to come back after placing fourth, but I tried not to ask myself too many questions.” For the free, she wants to take it element by element. “The technique is my strong point, the spins are my weak point so far,” the Frenchwoman added.

Germany’s Nathalie Weinzierl had to skate in the second of six warm up groups. The skater from Mannheim gave a solid performance to Exodus, completing a triple flip, triple Lutz-double toe and difficult spins. She only did a three-turn out of the double Axel. She surpassed her personal best by almost ten points with 52.82 points, and finished eighth.

“I’m very happy about my performance,” said the 18-year-old. “For the first time, both Lutz and flip worked out well in a program. I was a bit too slow in the landing of the double Axel, therefore it wasn’t quite clean. In practice everything went well. This helps a lot to go into the warm up with a good feeling. Obviously the goal is to skate clean on Saturday. If I skate as I plan, it is possible to make the top ten.”

Elena Glebova of Estonia missed the triple Lutz, but rallied back to land a triple toe-triple toe and placed ninth at 51.90 points.

“It wasn’t my best performance,” the 23-year-old admitted. “I was disappointed with the first fall on the triple Lutz. It’s always been the hardest jump for me, but most of the time this season I’ve been landing it. My personal best is 52 with a clean program so this was close, (51.9) with a fall. I’m thinking if I hadn’t fallen, I would have maybe another four points.”

“It was very good,” said the 18-year-old. “I really enjoyed my performance. It feels great with the audience cheering me all the time. Tomorrow I want to come out and skate clean, but most of all, enjoy my performance again and be happy.”