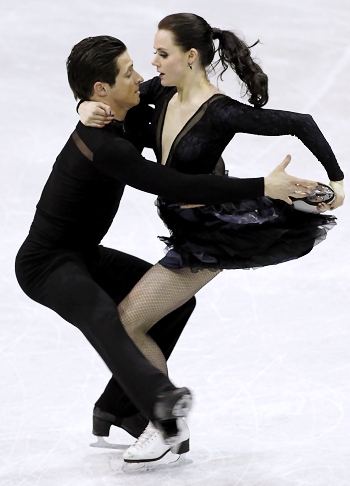 In the final event of the 2013 Canadian Tire National Figure Skating Championships, Tessa Virtue and Scott Moir (WO) gave the performance that they wanted to have in order to win their fifth Canadian title. Piper Gilles and Paul Poirier (CO) maintained second to with the silver, while Nicole Orford and Thomas Williams (BC/YT) came from fourth to capture the bronze.

Virtue and Moir’s score of 108.19 (50.66/59.53) points was not what they wanted. Their spin was only called a level 1, one lift was a level 2, and they lost two points for extended lifts, however, they embodied their Carmen characters and created a breathtaking moment.

The free dance has not undergone as many changes as their short dance has, but one notable change was the choreographic lift at the end of the program.

“We made that decision just last week,” Virtue explained. “We loved the original creative lift—we loved the final position and the exit, but we couldn’t get the entrance to look comfortable, especially at four minutes in the program. At that point, we wanted to leave on a high note and we wanted it to be seamless. It didn’t matter how we maneuvered our way into that lift, it just wasn’t there.”

The new lift is more fluid, changing several different positions, but it is also effective and fits the musical phrasing well. In the end, the change may only make a difference of a few tenths of a point, but those tenths could be important in the coming months. They will also be checking their lifts carefully as they approach the ISU championships.

“Marina [Zoueva] is going to be all over me now with a stopwatch for the next two months,” Moir said about their lift deductions. “With our element coach, Johnny Johns, we’re checking that every day. It is a little bit frustrating, but it’s been like that for a couple of years, so we’re good for it. We can get this down.”

Virtue (23) and Moir (25), who scored a total of 187.23 points, have been named to the Four Continents team, and they confirmed that they plan to go to Osaka, Japan, for that event.

Gilles and Poirier delivered a strong performance of their own, and did not have any level issues in their “Wild Spirits” free dance. On the contrary, they earned level 4s on all elements besides the two footwork sequences, which were a level 3.

Performing with their trademark confidence, they engaged the near-sellout crowd at the Hershey Centre on Sunday afternoon, and skated like they had nothing to lose. They scored 102. 86 (51.93/50.93) points for the free dance and 170.81 overall.

With Gilles now released from U.S. Figure Skating and competing internationally for Canada this season, they are looking forward to heading into their first round of ISU Championships, starting with the Four Continents Championships.

Orford and Williams were the surprise bronze medalists (152.56) at this event. Their High Society program was skated with much freedom and joy. Heading into the free dance, they were sitting comfortably in fourth place, and it seemed like they performed their program in order to delight the audience instead of trying to move up a spot.

Their score of 91.04 (46.34/44.70) points was their best of the season by far, and their bronze medal effort has given them a spot on their first Four Continents team.

Alexandra Paul and Mitchell Islam (CO) were expected to be on the podium with Virtue and Moir and Gilles and Poirier, especially after their strong practices this week and delivering such a fantastic short dance.

Their routine to Legend of 1900 was going so well until it appeared that Islam caught a toe pick just as they were beginning their diagonal footwork sequence. Both skaters fell to the ice, and it took half the length of the ice before they could pick up their steps again. They managed a level 1 on the element, but the damage had been done, and they finished their dance heartbroken. Their fifth-place free dance (85.49) dropped them just off the podium overall (151.73).

Kharis Ralph and Asher Hill (CO) had a disappointing short dance that left them in fifth, no longer in striking distance of the podium. However, they were able to rally in the free dance, finishing fourth (88.78) in that segment, and leaving the competition on a relative high note (140.86).