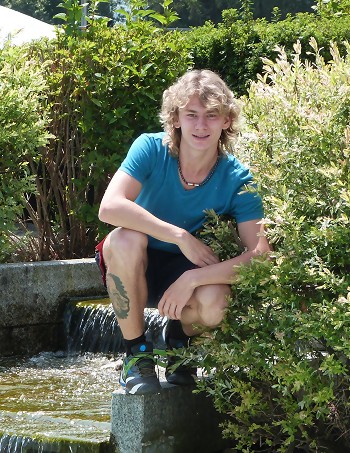 Artur Gachinski enjoys the sunshine in the park next to the ice rink in Pinzolo, Italy, after practice at the training camp.

The 2012-13 season has been a tough one for Artur Gachinski. The 2011 World bronze and 2012 European silver medalist underperformed in most of his competitions and failed to make the European or World team as he placed fourth at the 2013 National Championships.

The short program is in Flamenco style. “I did my short program with Jeffrey Buttle, and it was really quick. It was easy to work with him,” Gachinski noted. “He is suggesting his steps, I am suggesting my steps – what I can do. We put it all together and eventually got quite interesting steps and moves, especially the footwork sequence. His suggestion to start the footwork in the middle of the ice surface and not as usual from the blue line, was very original. Alexei Nikolaevitch (Mishin) and I really liked that and we decided to do a similar step sequence in the free skating.”

The free skating is set to the soundtrack of the movie Anna Karenina, released in 2012 and based on Lev Tolstoi’s epic novel about a young woman torn between the love of her life and conventions in Russia in the 19th century. The program was choreographed by dancer Juri Smekalov.

“At first I watched the movie and I didn’t like it so much, but then I watched it again and I felt it was ideal for me,” Gachinski revealed. “I wanted to use this music. We chose the music and suggested it to Juri Smekalov. He always has interesting moves of the arms and the body, interesting ideas and images.”

“The story is sad, but beautiful and interesting,” the 19-year-old explained. “I see myself in the role of the lover, obviously,” he added, laughing. “We decided not to make up our own story but stick to the story from the movie and the ballet and show this story on the ice.”

Gachinski feels not only that he has good material heading into the Olympic year, but also that he has matured as a person and has overcome his challenges.

“I have drawn my conclusions and I found my balance. I am working even harder in practice, without getting nervous and without freaking out so that each practice is calm and productive. I just want to be pleased with each practice and enjoy skating and enjoy what I’m doing in practice,” the 2011 World bronze medalist pointed out.