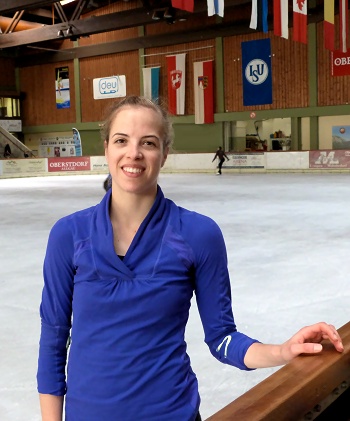 Carolina Kostner of Italy at the IceDome in Oberstdorf, Germany.

Figure skater Carolina Kostner of Italy has started her summer training for the Olympic season at her training base in Oberstdorf, Germany.

“I came here three weeks ago,” Kostner told Golden Skate, before the Musicals on Ice show on Friday, July 12. Before that, the 2012 World Champion and reigning World silver medalist has been busy as well.

Following the shows in Kazakhstan at the end of May, the five-time European Champion returned to her university in Torino, Italy for exams.

“It went really well, better than I thought,” Kostner shared.

In June, she went to long-time choreographer Lori Nichol in Toronto, Canada, to build two new programs. However, she is not yet ready to reveal the music to the public right now.

“I will announce my choice of music in August on my home page,” the Italian Champion promised. “The programs are still a lot of work. Lori suggested the music and I fully trust her.”

The free skating music is better known than the short program music, but both suit the skater really well. Kostner has strong material heading into the Olympics, which will most likely be the final season of her career.

In Oberstdorf, the 26-year-old resumed her on-ice training during the traditional IceDome summer camp that attracted more than 80 skaters from 25 countries in June and July.

“I’m not fully participating in the camp, but I use the ice time and the ballet lessons. Otherwise, I am following my usual preparation routine,” Kostner noted.

The reigning European Champion will stay in Oberstdorf during the rest of the summer with coach Michael Huth, take a week off at the end of July, and then plans to fully focus on her preparation.

“I am probably not going to attend any events outside the Grand Prix this fall,” Kostner shared. “I would like to do the Winter Universiade as it takes place in Trento, but the schedule in December is quite tight.”

The Italian skater was the top star in the ice show Musical on Ice which concluded the first part of the IceDome summer training camp. She performed to Mein Herr from Cabaret (with Matej Novak) and to Ich Gehör Nur Mir from the musical Elisabeth (with Alexander Gazsi).