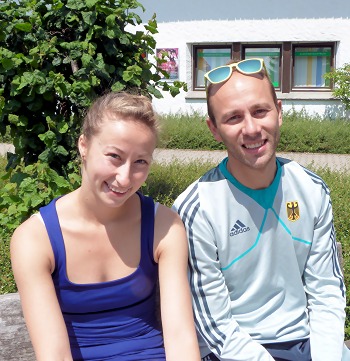 German ice dancers Nelli Zhiganshina and Alexander Gazsi made a name for themselves last season with their entertaining “Zombie” free dance. The final breakthrough came at Worlds when the couple cracked the top ten for the first time in their career following two 11th-place-finishes in the previous two seasons.

Now, the Russian-born Zhiganshina and Gazsi are preparing at their home base in Oberstdorf, Germany, for the Olympic season and have once again, have something interesting and unusual in store.

“Our short and free dances are connected. The free dance is the sequel to the short dance,” Zhiganshina revealed.

Originally, the team planned to tell the story of how a society lady meets a homeless man in a park in their free dance, but now the story has been altered a bit. Zhiganshina, still in the role of the high society lady, meets a book-loving nerd and makes fun of him, but they dance together to the Finnstep. The next morning – now we are in the free dance – the lady wakes up next to the nerd on the bench in the park and tries to get away from him, but he wakes up.

The skaters chose music suggested by a choreographer in Oberstdorf and again it was important to them that this music hasn’t been used before.

“I don’t even know what the first part of the music is called,” admitted Gazsi. “The slow part is a beautiful waltz, very classical. The last part is a remix of the song I’m Happy by the Gorillaz.”

The goal is to create a positive emotion.

“The characters are very different from each other, but this was our aim. We didn’t want any drama, although we did include a little love story,” the 28-year-old dancer went on.

Following the 2013 World Championships, the German Champions went to Russia to meet with choreographer Ilia Averbukh, then they joined Igor Shpilband for a training camp in May in Novi, USA, before travelling to Kazakhstan to Denis Ten’s shows. Since June,  they have been back in Oberstdorf.

At the End of July they took part in an ice dance seminar held by the German Skating Union in their training town. They are currently continuing training with coaches Martin Skotnicky and Rostislav Sinicyn in Oberstdorf.

Zhiganshina and Gazsi don’t want to attend Nebelhorn Trophy this year as it is the Olympic Qualifying event, but want to debut their programs at Ondrej Nepela Memorial in Bratislava.

“Our goal is the Olympic Games in Sochi, like for everybody else,” Gazsi said.

They have qualified two spots for Germany at the Olympic Games, but they need to clear two hurdles to get there: 1) They have to meet a minimum score set by the German Federation, and 2) Zhiganshina still has to receive her German citizenship. The 26-year-old from Moscow has passed the language exams and fulfills all requirements to become a German citizen, but Russia needs to release her from Russian citizenship first as Germany doesn’t tolerate double nationality in most cases.

“I’ve turned in all my documents and now I’m waiting for a response from Russia. Once I get it, I can have my German passport immediately. It should be all done by fall, hopefully even earlier,” Zhiganshina said.