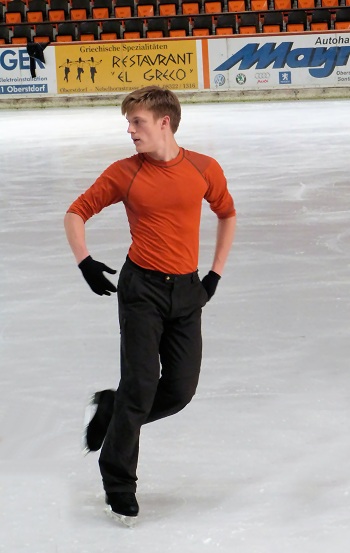 Tomas Verner of the Czech Republic trains at the IceDome in Oberstdorf, Germany.

Tomas Verner of the Czech Republic is looking to move forward following a tough season in which he finished in a distant 21st place at the 2013 World Figure Skating Championships. He had to regroup.

“After the disappointing performance in London, I wasn’t in the mood to skate,” the 27-year-old admitted. He went home to the Czech Republic to have a rest and left his skating equipment in the Toronto area, where he has been training since summer 2010.

“I did some work for school, I rested, and did a few shows,” Verner recalled. He participated in a show in the far east of Russia with Evgeni Plushenko and in Denis Ten’s shows in Kazakhstan.

The popular Czech skater then attended the IceDome summer camp in Oberstdorf, Germany, in June and July where he worked with his previous coaches Vlasta Koprirova and Michael Huth, as well as with ice dance coach and choreographer Rostislav Sinicyn.

“Tomas was hard-working and very motivated from the very beginning of the camp,” Huth noted. “He was paying a lot of attention and he has improved his speed and rhythm.”

The 2008 European Champion has struggled in the past two seasons, dropping to 16th and then 21st at Worlds. The multiple Czech Champion has been handicapped by various injuries, including a nagging back injury that is still bothering him from time to time. Additionally, he wasn’t able to bring his good practices to competition. So he returned to Oberstdorf, where had trained for years, to refresh his mind and motivation.

It seemed to work. Verner was relaxed and enjoyed his training alongside his good friend Carolina Kostner. He had a lot of fun in the IceDome show “Musicals on Ice” where he performed in various group numbers and as “Carmen” in an entertaining parody.

With Sinicyn, he polished the choreography and revamped the footwork of his Tango free program. Verner had used this music before in 2009 and the program was originally choreographed by Lori Nichol. Following the training camp in Germany, Verner returned to Toronto on July 22 in order to get a new short program from Nichol. The music wasn’t revealed yet at that time.

Verner, who has not yet received a Grand Prix assignment, plans to kick his season off at Nebelhorn Trophy in Oberstdorf at the end of September. He didn’t want to confirm rumors that he might return to Oberstdorf full-time for training this season, but it looks like it might a possibility.