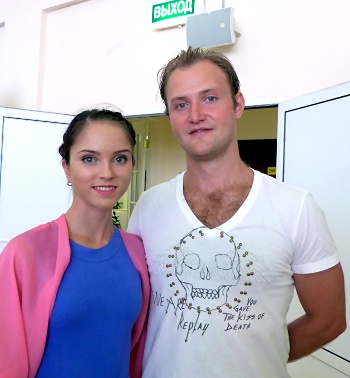 When coach Nina Mozer heard the Charlie Chaplin music that Nikolai Morozov suggested for Russia’s Vera Bazarova and Yuri Larionov, she was tongue-tied for about 20 minutes. She thought about it and then agreed to their choice. This music choice came as a surprise to her students as well.

“Actually, we wanted to do a program in our customary lyrical style and we had picked a piece by Frederic Chopin,” Bazarova, 20, noted, “but then Nikolai Morozov suddenly came up with this modern arrangement of Charlie Chaplin. For us it is the first time to try something like this and we liked it. Otherwise we wouldn’t have done it. The idea is to portray the 30s of the past century. We are like an old photograph coming to life.”

The free program to Polovetsian Dances from the opera Prince Igor by Alexander Borodin is a more natural choice for the two-time European medalists.

“This style is closer to us and we had already selected this music at the end of last season,” Larionov pointed out. “As for the short program, we still have to work a lot on it; each move of the hand needs to be perfect.”

Bazarova and Larionov came off a difficult season but they are now fresh with enthusiasm going this year. Last fall, the tiny Bazarova suffered from a hip injury and then Larionov injured his hand. The team missed the National Championships and the European Championships. Then the team and long-time coach Liudmila Kalinina suddenly parted ways in February. The exact circumstances and reasons for this unexpected split never became public, but according to Russian media, the skaters decided to leave Kalinina due to disagreements. Singles coach Viktor Kudriavtsev, who had helped Bazarova with her jumps in the past, took care of the team before and during the 2013 World Figure Skating Championships, where they finished 7th.

After Worlds, Bazarova and Larionov joined Mozer’s group and are now training together with World Champions Tatiana Volosozhar and Maxim Trankov and 2012 European bronze medalists Ksenia Stolbova and Fedor Klimov, as well as several junior teams in Moscow.

“At first, training in a group was something unusual for us,” admitted Bazarova. “We were used to working alone with our coach most of the time. But then we realized that it is actually easier to train in a group. The competition in practice is pushing us and we really enjoy working with Nina Mozer and the other coaches at the rink.”

Larionov, 27, stressed the role of their choreographer Liudmila Vlasova. “We are very grateful to her. She didn’t abandon us during that difficult time and she is helping us now as well, mostly when we work on the connection between the partners.”

Under their new coaches, Bazarova and Larionov are doing a lot more off-ice training. Bazarova underwent intense physiotherapy to treat her hip and feels much better now. Larionov sports a new, longer hairstyle on Mozer’s suggestion. “We want to skate more freely and with more confidence,” Larionov noted on their goals for the Olympic year.

Bazarova and Larionov are scheduled to compete at the last two Grand Prix events – Trophee Bompard in Paris, France, and the Cup of Russia in Moscow in November. They are also planning to compete at a national event earlier in the season.