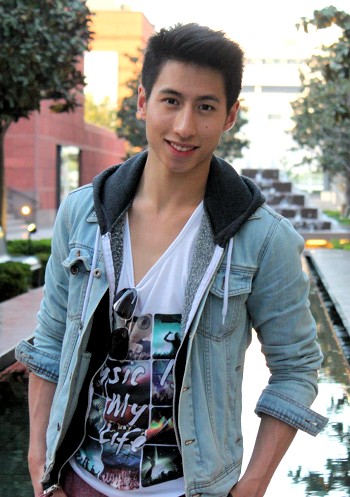 Canada’s Jeremy Ten, who took his first steps on the ice 15 years ago, couldn’t have imagined the position that he would be in as he approached his 25th birthday. This could be a birthday that is celebrated in Sochi, Russia at the 2014 Winter Olympic Games.

“Every competition coming up is just the stepping stone towards that,” says Ten. “It would be a dream come true. I could honestly be skating in the middle of nowhere and I’d be happy just being on an Olympic team.”

Like many of the male skaters who compete at the senior level, Ten pours his heart and soul into every program he skates. He skates for the love of the sport, not the fame and glory that could come from it.

Golden Skate took a moment to chat with Ten during a break at the 2013 BCYT Summer Skate at Ten’s home arena. The skater was blasting Katy Perry’s new single Roar on his earphones because of it’s “confident and positive message”.

“I actually had a moment with Christina Aguilera today,” said Ten. “I played some Dirrty. Anything that gets me feeling good is on my playlist.”

For the Olympic season, Ten chose his program music with the theme of confidence and hope. His short program is set the the soundtrack of W.E., specifically the track called Dance For Me Wallis.

“It gives me a feeling of fluidity and hope,” says Ten. “The feeling that I wanted from the short program was to give me a little boost.”

His coach, Joanne McLeod, found the music for his free program in the back of her closet. Ten took a listen to the music from Andrew Lloyd Webber’s Variations on a drive home from the rink and automatically fell in love with the contemporary/modern movement that they could use for his choreography.

“It’s got aggressive, strong, and confident evoking feelings,” explained Ten. “It’s almost like a ballet in a way. That was what our vision was when we choreographed this one.”

During the fall season, Ten has at least 20 hours of training at the BC Centre of Excellence in Burnaby, British Columbia. That means spending a lot of his time either on the ice or doing off-ice activities such as dance classes and gym training. However, that isn’t stopping him from having a life off the ice coming into the Olympic season.

Instead of taking a break from school to focus on his training full time, Ten is taking one 300 level Health Science class at Simon Fraser University. He took the advice of a fellow Canadian skater, Paul Poirier, who had decided not to take classes when working towards qualifying for the 2010 Vancouver Winter Games.

“Skating is our heart and soul,” says Ten, “but it’s good to have something that gives us a mental break. School can help snap you back into reality.”

Ten has already finished a Kinesiology degree, and is now only nine courses towards the end of his Bachelor of Arts in Health Sciences. His goal with these degrees are to go into humanitarian work and maybe travel abroad for work.

“I’ve always been a people person and have always wanted to extend a hand and help people,” says Ten. “That’s always been the kind of person I am.”