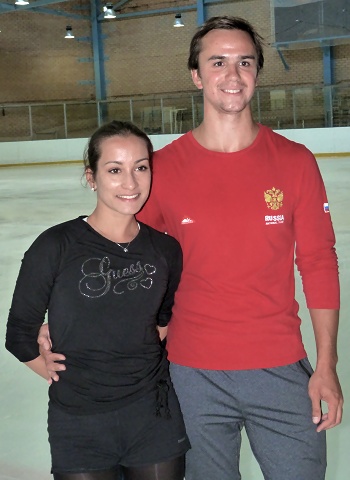 Russian pair skaters Ksenia Stolbova and Fedor Klimov are in for a fresh start this season. The 2011 World Junior silver medalists changed coaches and moved from their native St. Petersburg to Moscow last spring.

They are now preparing for the season with the goal in mind to capture a spot on the team for the Olympic Winter Games in Sochi – a difficult task due to the depth of pair skating in Russia.

Stolbova and Klimov went from long-time coach Liudmila Velikova to Nina Mozer’s school right at the end of the season. The team felt that they were not progressing under their old coach, and they actually entertained the idea of switching in 2012. Klimov is also good friends with Maxim Trankov.

“Tatiana (Volosozhar) and Maxim (Trankov) told me that they (Stolbova and Klimov) would like to switch to me,” explained Mozer, “but I realized at that time that emotions played a big role and I declined. I wasn’t really ready for that myself. This time it was different. First of all Tatiana and Maxim need another strong pair to train with in the Olympic year, and they asked for a sparring partner for a long time.”

The first months under the new coaches have passed for Stolbova and Klimov.

“We are in high spirits. Right now we are mostly working on the elements and skate parts of our program,” Klimov, 22, shared. “The main job now is to do the new elements, to maintain the old ones, and to skate the programs. We are in a good mood, because everything is going better day by day and we see the progress.”

One important thing for them to tackle is the triple twist – an element they have been struggling with for a long time.

“Obviously this is the most difficult question, because we are still relearning it,” said Klimov. “We are getting a new technique, (coach) Vlad (Vladislav) Zhovnirski is helping us, and I think the technique has improved. We are doing a double now and soon will move on to the triple. We started from scratch, with some exercises, and with the throw without revolutions.”

Klimov was sidelined with a twisted foot earlier this summer, however, he resumed on-ice training in July and jumping in August.

Stolbova and Klimov are both very satisfied with their new coaching situation. Their choreographer now is Alla Kapranova.

“We are working with Nina Mozer, Vlad Zhovnirski, of course Stanislav Morozov and Maxim (Trankov). Everybody is helping. If someone sees something (in practice), he comes over, corrects us and gives us advice,” 21-year-old Stolbova pointed out.

Klimov revealed that Trankov help them to put together the step sequence for the short program.

“We have worked with more experts in a short period of time already than in our whole lives so far. We already received an enormous amount of experience and more is to come,” he went on, referring to their summer training.

The new short program is a medley of Spanish music.

“I think we grew up and the program is more grown up,” Stolbova commented. “We’ve had a similar program in the past with Spanish music and Flamenco,” her partner added. “It is familiar to us, but just more grown up especially concerning the relationship within the couple.”

The 2012 European bronze medalists don’t have a new long program yet and decided to keep last season’s Addams Family at least for their first competitions.

“We want to change the program, but we don’t know yet what we will do,” Stolbova noted.

“For the first competitions, we’ll keep this one because we have to skate clean and well,” Klimov added. “We can’t skate an unpolished program. Maybe we will have a new one for the second Grand Prix.”

Stolbova and Klimov have been assigned to the Grand Prix events Skate America and Cup of Russia. They are planning to kick off their season at the national competition Federation Cup in Sochi in October.