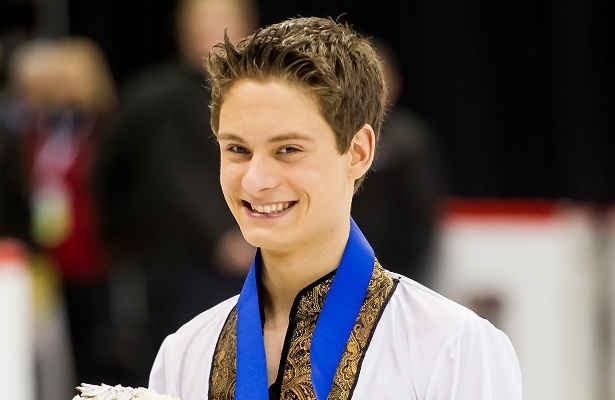 Bennet Toman won the silver medal in the Junior division at the 2014 Canadian Figure Skating Championships.

Canada’s Bennet Toman made a move from Quebec to the Toronto area back in April 2013, and the family has been thriving ever since.

“The move was very quick as our home in Montreal sold really fast,” said the Canadian junior silver medalist. “We rented a townhouse near the Canadian Ice Academy.”

This past March, the family bought and moved into a new home located in the Heart Lake area of Brampton.

“There have been a lot of changes, but I am starting to feel more settled,” said Toman. “It was a lifestyle change for my entire family, but it allowed us all to have better advantages.”

Although the coach change was tough for the skater, he quickly bonded with Robert O’Toole.

“We have a terrific relationship,” said Toman. “We both seem to understand each other and have a clear vision for my skating.”

“I remember watching Bennet at nationals when he was younger and was really impressed with his ability and potential,” O’Toole recalled.

Since nationals, Toman has been working on improving the consistency of his triple Axel as well as the landing positions of his jumps overall.

“I have also been working really hard on my program component scores,” said the determined skater, adding that he has recently begun rotating the quad toe and Salchow.

Toman also works with Karen Preston, Mark Bradshaw, and Anne Shelter on his edges, stroking, and other basic skating skills. Overall, he trains approximately 30 hours per week, 18 to 20 of which are on the ice. Off ice, he combines ballet, resistance training, endurance training, and plyometric and reactive training.”

“I train at the rink for ballet and off-ice jumps and some resistance training, but I also train three to four times per week at home with my mom,” said the teen. “She is finishing her Masters in Exercise Science, but she trained figure skaters for years in Quebec.”

“Since coming to the Canadian Ice Academy in Mississauga, our team of coaches has worked really hard on improving his technique and consistency,” added O’Toole. “Our next challenge is to work on his speed, power and ease of skating.”

Toman’s main goals for this season are to skate two clean programs at nationals, where he will be making his senior debut. He would also like to qualify for the Junior World team.

“Bennet has some pretty high aspirations and we are all eager and dedicated to assist him in achieving his goals,” said O’Toole.

The 17-year-old has also been focusing on his presentation, as well as his projection towards the audience, and hopes to get both the spectators and judges more engaged in his performances this season.

“I am going to try to present a more mature and developed skater this year,” he said.

The skater will be keeping last season’s short program to Tango De Los Asesinos by John Powell, which has been reworked to meet senior requirements. His new long program will be to music from Spartacus. Both programs were choreographed by Mary Angela Larmer, while Lenore Kay cut and edited the music.

“I love my new long, but especially my new costume for my long,” said Toman. “My Grandma has been making my costumes ever since I started skating, and this costume was a challenge for her!  It is very different for me, and I really like the change.”

When he isn’t training, Toman likes to play golf, spend time with his grandparents, and explore his new surroundings in the Heart Lake conservation area. He now has a new companion that will soon accompany him on his trail walks.

“Rocco, a Papillon puppy, was a gift from my parents to celebrate my accomplishments for the past year,” he shared. “He is only 10 weeks old, and is the best gift ever! I researched and found that Papillons love the outdoors and are energetic and loyal, which really suits me.”

Toman is competing at Skate Detroit this week, and will then compete at the Quebec Summer Championships. He was also assigned a Junior Grand Prix assignment in Courchevel, France.

“I am truly excited and very ready to give it my best!” he said.