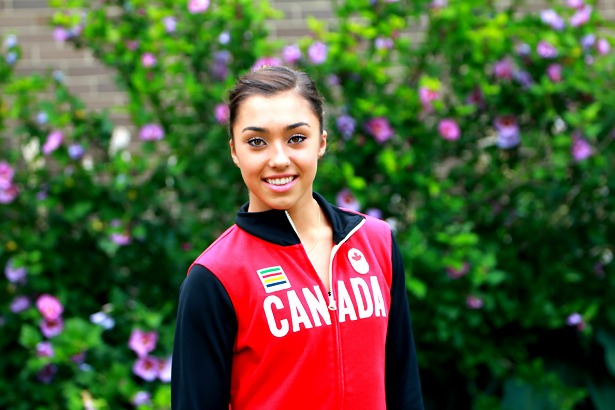 Canada’s Gabrielle Daleman, who suffered a stress reaction—a precursor to a stress fracture—in her right foot last season, is now injury-free and is hungry for the national title.

“I want to win nationals,” said the two-time Canadian silver medalist. “I also want to be selected for the Four Continents and World team and place in the top five in both competitions.”

The injury from last season resulted from a combination of training and a bad skate boot; however, the skater did not know the extent of the injury until she returned home from the Olympics.

“It was very painful and I had to skate and train through the injury,” Daleman recalled. “I was determined to do my best. I was so proud to represent my country.”

The Olympics were tough for the teen, who pushed through the pain during the three weeks she trained in Sochi.

“I had to stay focused,” said Daleman, who finished 17th. “I learned perseverance from training through times when I was in pain and exhausted. The Olympics aren’t the best place to go through this.”

Nevertheless, the Olympic Games were an “amazing” experience overall for Daleman, who trains in Richmond Hill, Ont.

“I skated the best I could and met so many wonderful athletes from so many countries,” she recalled. “It was a blast. My family was in Sochi supporting me and I got to spend a little time with them too. I have so many great memories.”

Despite the injury, the athlete went on to compete at Worlds where she placed 13th.

“Although the jumps weren’t all there, I did not give up the choreography,” said the skater. “It takes time to put it all together.”

Her short is to Vivaldi’s “Winter” from The Four Seasons, and the long is to “Aranjuez” by Rodrigo. Both programs were choreographed by Lori Nichol.

“I love the choreography,” said Daleman. “Lori always does a great job and I love working with her.  She really challenges me physically in these programs and has a lot of transitions in them, which pushes me to be a better skater. Also, the characters I portray have that fierceness which I’m known for.”

The skater, who is currently coached by Andrei Berezintsev and Inga Zusev, trains six days a week during the months of September through June.

“After school, I jog to the rink for practice and then do ballet for 45 minutes,” said Daleman. “Later on I train with my dad (her conditioning coach), and we do things like weights, circuits, plyometrics and running.  Lots of running.  On Saturday I train for 2 hours on the ice and then another hour off-ice.”

During the summer months, the skater trains four hours on the ice and one hour off, plus an hour of ballet Monday through Friday.

This season, Daleman has been working to improve her triple combination jumps and has also been learning the triple Axel.

“If it is ready,” responded Daleman, when asked if she will use the triple Axel this season. “I had to take some time off after worlds to make sure my foot was 100 percent healed from the Olympics. My jumps are going really well, and so is the triple Axel, so we’ll see. My team and I are also really focusing on the program component part of my skating this year.”

“We are working on it,” confirmed Berezintsev, “but it is still to early to say when we will use it. Gabrielle has a very strong take off on her jumps, so we are working to control the landings. We want to make sure that her triple-triples are also consistent.”

“What some people might forget is that she went from the novice to the senior level in two years,” he explained. “Those are very big steps for such a small time frame. We feel that the pressure to make the Olympic team impacted her consistency on the landings, so that is what we are working on now.”

For summer fun, Daleman likes to go up to Parry Sound to visit her grandparents.

“They run a family business there with my dad,” she said. “I really enjoy it up in Parry Sound with the all the beaches, walking trails and of course my parents’ restaurant.  If you like steak, seafood or pasta with a view of the bay, that’s the place to go! Georgian Bay is so nice and I have a great time going swimming, biking, and running with my brother, Zack.”

Later in August, Daleman plans to attend the Brian Orser camp in Port Carling for two weeks with all her training partners and brother.

“It’s so much fun and we do a show at the end of the camp,” she said. ‘The kids from town love it! I also get to train with Javier (Fernández) and Yuzuru (Hanyu) and learn different things.”

Before going to camp, however, Daleman will compete at the Thornhill Summer Skate Aug. 14-17. She is also currently scheduled to compete at Cup of China and NHK Trophy later this fall.