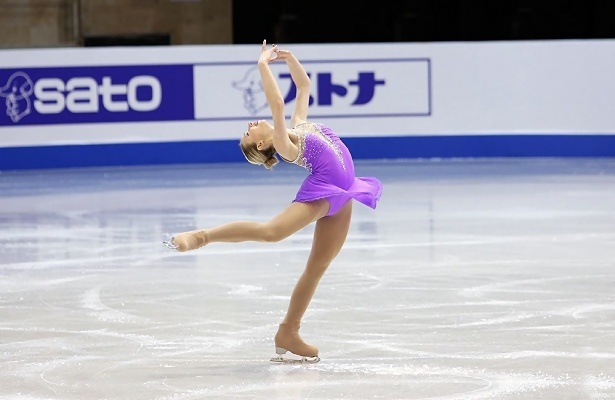 When Tyler Pierce competes at the senior national level this season, she will be armed with several items in her technical arsenal—including the much-desired triple-triple combination, as well as solid spins.

“I really want to show maturity in my skating,” said the US Junior silver medalist. “I also feel like I’ve improved my consistency throughout all my basic triple jumps.”

Pierce’s goals for this season include improving the grade of execution for all of her elements and consistently achieving level 4 for all her spins.

“My biggest problem last year was that my triple Lutz-triple toe was not consistent,” said the 15-year-old. “This year, I’ve decided to do the triple flip-triple toe instead.”

The teen, who has grown two inches since last year, just competed in the 2014 Southern California Inter-Club Championships in June and finished in first place despite having a rough time with both programs.

“My new programs are still very new to me,” Pierce explained. “I lost focus on my jumps and dwelt on each mistake I made instead of focusing on the present.”

After the event, Pierce and her coach, Tammy Gambill, made a decision to go back to last season’s short program to Voices from The Forest by Paul Spaeth.

“We discussed it and Tyler was completely on board,” said Gambill. “It just seems like a better fit for her right now, so we will rework it with Cindy (Stuart) to meet the senior requirements.

“Tammy motivates me on and off the ice,” offered Pierce, who trains in Riverside, Calif. “She is always encouraging me and guiding me, and knows when I need to be pushed. She is an amazing coach. I would not be where I am now without her. I know she has big goals for me, so it makes me want to work harder. I feel very lucky to have her as my coach.”

Mark Pillay choreographed her new long program, a character-driven piece to Dance of the Hour.

“I’m excited about the long program as it is so different from anything I’ve ever done before,” said Pierce, adding that she loves working with both choreographers.

“The long program is a very new concept,” said Gambill. “Tyler portrays several different moods throughout the program, and it’s fun to watch her transition through them. She is so good about expressing herself and is very animated.”

“Tyler has always been a hard worker who is self-motivated and even tough on herself,” Gambill said. “It’s not hard to get her to train. She’s one of the first skaters at the rink warming up, and is always smiling, happy, and bubbly. She is such a joy to teach.”

When not training or studying, Pierce enjoys oil painting.

“Most of the paintings I paint are of places I’ve traveled to internationally,” she offered. “I also love to cook and bake.”

Pierce is hoping to be assigned a Junior Grand Prix (JGP) event later this summer or fall.

“I feel I haven’t been able to perform well internationally yet,” she said. “Last season, competing internationally was a very different experience for me. In my opinion, you even need to be more mentally tough for these competitions in order to succeed.”

“I’ve been working on a lot of visualization and positive thinking this year,” the skater added. “I feel more mentally prepared for these international competitions now.”

Pierce also wants to medal at nationals and make the Junior World team.

“Returning to Junior Worlds is a big goal for me as well,” she said. “I was not happy with either of my performances there last year. I let my nerves get the best of me. If I were to return, I’d definitely be seeking redemption.”