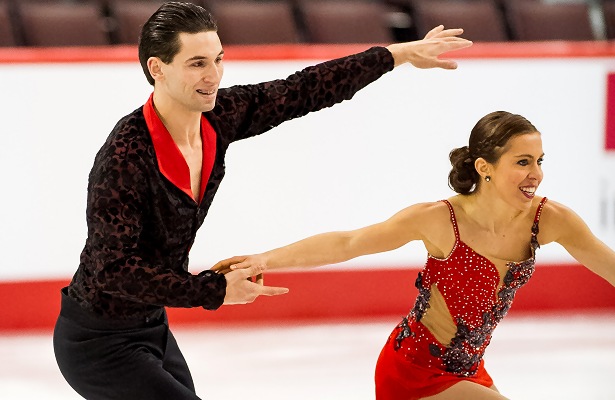 Canada’s Vanessa Grenier and Maxime Deschamps won the respect and admiration of many after they captured gold in the Junior division at the 2014 Canadian Figure Skating Championships in their first season together as a team.

“Since Vanessa had never done pairs before, the goal for last year was to learn the basics first,” said Deschamps. “We didn’t have any goals about the placement when we first started, but as the season was going and the elements were progressing, we started thinking about maybe making the podium…then being in the top two…then maybe win!”

“We really focused on the performance we wanted to have at Nationals and we made it happen the way we visualized it,” Grenier added.

The skaters will kick off their new season as seniors at the 2014 Québec Summer Championships in Montreal the first week of August. They also plan to compete at the Souvenir Georges-Éthier in September, as well as sectionals in Québec and the Skate Canada Challenge later in the fall.

“We want to prepare for Nationals and we have technical goals to achieve and plan to get those things done this summer,” said a committed Grenier. “We can only focus now on training hard to be prepared and show that we deserve a spot.”

The team is still working with coaches Bruno Marcotte and Richard Gauthier and are also getting a little side help from ice dance coach Sylvie Fullum for detailing.

“My expectations for them are very high,” Marcotte commented. “Even if their progression last year was extremely fast, we still have to keep in mind that they are a really young team as far as experience goes. So my goals for this season is that they get a chance to represent Canada internationally and for them to make a great impression on the judge so they can start building their reputation on the international level.”

“I’m not too worried about when that will happen,” he responded when asked about when the pair might make the world team. “I’m pretty confident that they will reach that level in the very near future. They’re a team that works so well together that they can only go one way … and it’s forward.”

Some of their technical goals include obtaining Level 4 on their lifts, pair spin, and side by side spin.

Grenier and Deschamps, both 22, are also debuting a new back outside death spiral and are working to increase the quality of their side by side triple jumps. They would also like keep the grade of execution (GoE) at a “0” for their new triple twist and increase from there.

“We’ve been working hard on the throw jumps as well, and would like to see them get +2 GoEs,” Deschamps shared.

“Every element is getting stronger and more consistent,” said Marcotte. “Their programs this year are much more intricate than last year.”

The skaters, who would like to compete as seniors internationally, are excited about their two new programs, both choreographed by Julie Marcotte (Bruno’s sister), for this season. For the short, they will be skating to a foxtrot remix of Frank Sinatra’s classic Cheek to Cheek.

“This style hasn’t been done much in pair skating and we also like the fact that it’s very joyful, just like our personalities,” said Grenier.

For the long, they will be performing to music from the movie Somewhere in Time.

“We watched the movie to get inspired and we feel like we can relate to the story,” said Grenier.

What is key to the skaters is that they will have the opportunity to work more with Julie throughout the season, unlike last year, to develop the program as their elements and skating skills evolve.

Last season, they improved at each competition and want to continue that progression this year.

“We’re adding new elements to the program like the triple twist, new throws, new lifts, and much more transitions into the elements,” Grenier revealed. “We’ve been skating together for a year now, and with all the splits that happened in Canada, we’re almost an old couple! We want to skate as one and show that we are a senior level team.”

They hope to perform on the international circuit in the Senior B events and would like to make the top 5 on the national podium.

“Medals are never a goal, they are the result of the work we put in our skating,” offered Deschamps. “It always surprises me how fast we improve, so it’s gonna be exciting to see.”

Grenier and Deschamps also have a coach for side by side jumps on the ice, a team of off-ice gym trainers, dance teachers, and Essentrics teachers.

While spending most of the summer training, the skaters just recently took two weeks off to “go out in the nature, see friends and do things” they don’t normally have time to do.

“We had a busy spring,” said Deschamps. “We travelled a lot across Quebec and even in Europe for shows and seminars. We received a lot of love and encouragement from the public during our “show tour,” and we learned a lot during seminars.”

“We are pumped for the season to start,” said Grenier. “We  are ready for another magical season!”