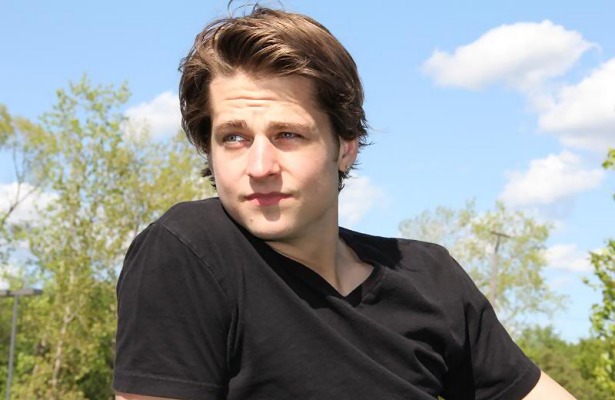 Last season, when he left the ice after a particularly tough session, USA’s Alexander Johnson gave himself the same pep talk, over and over again.

At times, after a right ankle injury in June 2013, memories were all that sustained him.

The Colorado Springs-based skater, 24, had been troubled by sprained ankles before, but this one was different. After three weeks off the ice, his ankle still wouldn’t support even simple moves. An MRI revealed two completely torn ligaments and other damage. Surgery, including a titanium screw to hold the ligaments in place, was successful, but complete recovery proved elusive.

“I was back on the ice two months after, but it was the strangest feeling,” Johnson said. “I had no balance. A pain block caused nerve damage in my leg, and I couldn’t use my foot properly.”

The 2013-14 season was lost, but that wasn’t uppermost in his doctors’ minds.

“Specialists at the Mayo Clinic were concerned about whether he would be able to walk normally again, never mind compete,” Tom Dickson, Johnson’s coach, said. “To skate would be the icing on the cake.”

Johnson was coming off the best season of his career. At the 2013 U.S. Figure Skating Championships in Omaha, his fifth-place free skate to the Beatles’ “Eleanor Rigby“ brought the crowd to its feet, prompting NBC commentator and renowned choreographer Sandra Bezic to tweet, “Alexander Johnson just skated one of the most beautiful free programs I’ve ever seen.”

A few weeks later, at the 2013 Challenge Cup in The Hague, Netherlands, he won silver behind former world champion Brian Joubert.

“I set such high expectations for myself after Omaha,” he said. “It made it that much harder to come to terms with the injury.”

This spring, Johnson began rounding back into form. He started fully training his jumps in April. At Skate Detroit last month, he estimated he had regained 90% range of motion, and 70% of strength, in his leg and foot.

“Two weeks before Skate Detroit, I did a triple loop for the first time,” he said. “I hope to put it back into my programs soon.”

He tells the story of his recovery on the ice. Johnson’s short is choreographed by Catarina Lindgren to Rachmaninoff’s “Trio élégiaque No. 2”; the skater wrote in his blog, “Catarina used the analogy of a bird with a broken wing that eventually becomes strong enough to fly again.”

For the free skate, Johnson and Dickson selected Stephen Sondheim’s Sweeney Todd, the ghoulish tale of a murderous barber whose victims are baked into pies in 19th century London.

Sondheim songs, with their complicated melodies, are rarely used for skating, apart from the occasional “Send in the Clowns”. (Sondheim wrote the lyrics for West Side Story; Leonard Bernstein provided the music.)

Johnson’s choices—”Barber and His Wife” and “Johanna,” a yearning ballad about lost love—are risky because the music has no obvious crescendo.

“We’re using minimal lyrics, nothing too complex,” Dickson said. “This same songs run throughout the musical, sung by different characters, in different instances.”

“We’re trying to tell the story, not necessarily make it like [Johnny] Depp did it in the film, or exactly what it is in the musical,” Johnson said. “I have my own internal dialog for the character.”

At Skate Detroit, Johnson landed a triple Axel in the free, improving on his performance at Broadmoor Open earlier this summer. U.S. Figure Skating added his name to the International Selection Pool (ISP).

Johnson called being back on the ice competing, doing triple Axels, a “blessing.”

“Summer competitions are so important,” he said. “I’m getting mileage on my programs. I hope to be assigned an international [competition].”

“I’m feeling really comfortable with the triple Axel and triple Salchow,” he continued. “As far as my Lutz, flip and loop, we’re working on it. Those jumps all take off using my right foot, which is the foot I had the surgery on. They’re definitely getting there.”

Johnson is one of the few skaters who have ever landed a triple Lutz-half loop-triple flip combination in competition. He’s itching to try it this season.