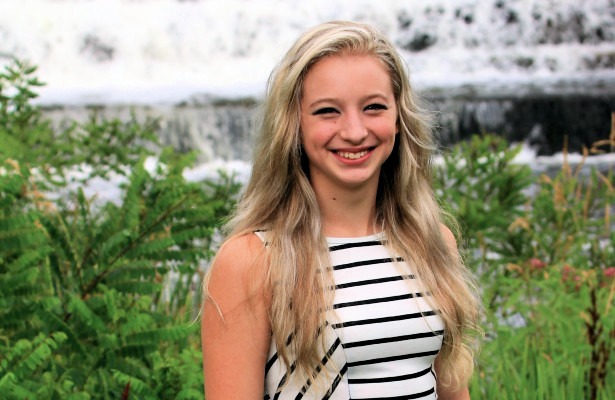 USA’s Amber Glenn, who is debuting the season as a senior on the national level, competed at Skate Detroit two weeks ago where she placed first in both the short and long programs.

“Skate Detroit was a great competition to finalize some details in both my programs and get some valuable feedback,” said the U.S. Junior champion. “It helped show me the final things that need improvement, getting my levels!”

“After completing my double Axel double-toe and my solo double Axel, I popped my triple Lutz and had a minor issue on my triple loop,” she said. “These things happen and I am working on trying to not let mistakes effect the rest of my program.”

“I am using the wise words of my choreographer, Rohene Ward, by staying “fierce and fabulous” and giving more attention to my levels,” Glenn continued. “Staying in the performance is the main thing that I brought back from Detroit.”

Glenn began her season earlier this summer at the Cannon Texas Open and Bluebonnet Open, and like many other skaters, pointed out that the summer competitions were not about placement.

“After every competition, I reflect on what I did well and what needs to improve and change,” she said. “I assessed my mistakes and work out strategies for the next one.”

The 14-year-old is soaking up all the experience and has a positive outlook for the future.

“It’s just a matter of being mentally where I should be and staying there at competitions,” she said. “These are experiences that will help me develop as a skater, as well as a person, to handle stressful situations.”

One of Glenn’s goals for this season is to gain more international experience. Last year, the skater was only assigned one Junior Grand Prix (JGP) event and then sent to Junior Worlds for her second. She placed third and seventh at the events, respectively.

“This year I am hoping to gain as much experience as I can so I can build on my future,” said the skater, who is now slated to compete at the JGP in Courchevel, France. “My other goal for this season is to skate with more maturity and consistency.”

Glenn, who trains in McKinney, Tex., is coached by Ann Brumbaugh and Ben Shroats.

“Erika Dove is my ballet instructor and Dr. Gayle Davis is my mental trainer,” she shared. “Together, they are truly a strong team that completely believes in me and makes me stronger every day, physically and mentally.”

Glenn has decided to use last’s years short to Gershwin’s “Summertime” for this season, which will be touched up by Ward.

“My short program was originally going to be to ‘You Raise Me Up,'” she explained. “I love the music, but I felt like it just wasn’t the right piece to skate to this year.”

“I love that my “Summertime” piece has a little of everything in it,” she continued. “It has slow, laidback sections that I can show a softer side to, then it flows up with a spunky fun side that I can throw some personality into.”

Her long will be to Maxime Rodrigurez’ “El Conquistador” and “Aranjuez” by Roni Benise, and was also choreographed by Ward.

“It’s so me!” said the teen, who will be a freshman this year. “I like that it has different emotions and that there is an obvious character that I can bring to the piece. The technical side of the program is very challenging and pushes me to become my best.”

Glenn has been working to improve the consistency and quality of her jumps, particularly the triple Lutz.

“I have also worked on making sure I have an obvious inside edge on my flip by changing the entrance,” she said.

“In practice she’s very consistent, but as with most skaters, struggles to nail every single jump when the pressure of competition arrives,” said Shroats. “She’s working on getting her percentage higher, especially on triple Lutz, in pressure situations. It’s going in the right direction for sure, and I feel by the time the season really kicks into high gear, she will be confident and trust herself to nail it every time.”

Since last season, Glen has also continued to work on her spins, footwork, and skating skills.

“I have started working with Julia Golovina on my edge quality power and line,” said the skater from Plano, Texas. “She has been an amazing addition to the team. I say “team” because it takes an entire team to create champions in any sport.”

While training takes up a lot of the skater’s time, Glenn tries to take time out to relax and likes to cook.

“It’s easier to eat healthy when you are the one doing the cooking,” she noted.

Earlier in May, the U.S. Figure Skating selected Glenn as the overall winner for the 2014 Athlete Alumni Ambassador (3A) award—a scholarship program that recognizes skaters who have achieved figure skating excellence while actively volunteering.