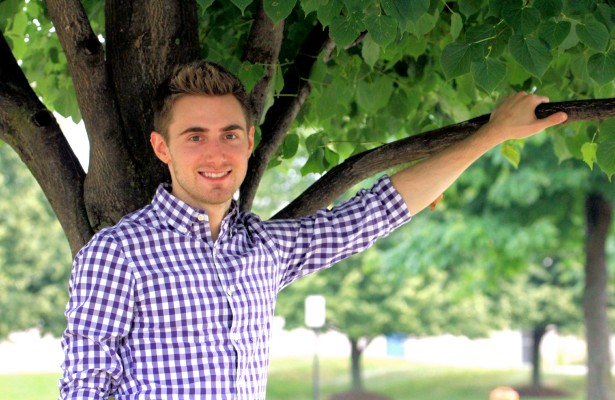 In August 2013, USA’s Douglas Razzano found himself contemplating whether or not he wanted to continue to compete in figure skating.

“It was a pivotal time in my skating life,” explained the 25-year-old. “I was so frustrated after my first competition (Glacier Falls), so overwhelmed by the Olympic season, that I just felt I couldn’t do it.”

Razzano wasn’t thinking about ‘retiring’ because he disliked skating, but because the job at hand seemed insurmountable at the time. Like many athletes, he had reached a point where he asked himself, ‘Why continue?’.

“I skate because I love to do it and nothing will change that,” affirmed the veteran skater.

Another turning point for the 2014 Challenge Cup silver medalist was when he was watching Skate America from his living room after having competed there the two previous seasons.

“It was a big eye opener,” revealed Razzano. “I asked myself, ‘Why wasn’t I there? What could I do to change this so it never happens again?’ So I changed the way I trained. I pushed myself harder than ever, and I feel my performances in Boston and The Hague in the spring were a reflection of that.”

Razzano is now back on the roster, and will make his third appearance at Skate America in Chicago, Ill., in October. His goals this season are clear: stay present, focused, to keep pushing his limits, and remember why he loves to do the sport.

“I want to make sure that I don’t skate to ‘get things’, but rather do it purely because I have a passion for it,” he explained. “I don’t want to go into competitions thinking what I might be able to get because of my results. That’s not staying present. Yes, I want to win and be rewarded for it, but that isn’t the primary reason I skate and I don’t want to lose sight of that.”

Razzano would also like to make the podium at US Nationals and be on the World Team.

“I do think I have what it takes,” he said. “I’m not going to be the guy doing five quads and hurling myself into the hardest tricks, but I am going to focus on what I do well with a quad in each program. Quality rules.”

At this point in his career, Razzano is not necessarily working on new elements, but working to make the ones he has in his repertoire better.

“Again, quality and consistency are the name of the game,” he noted. “I think I had a breakthrough in Boston in regards to how I was able to capture the audience while still completing the technical elements in my free skate. I hope to be able to continue and enhance that more in this new season.”

“I want to step out on the ice every time and give a performance that people want to watch and invest in,” he explained. “The technical stuff is important, of course, but I want a large emphasis to be on the performance.”

“I am pleased with how I skated in Detroit,” he said. “Naturally, there are plenty of things to be improved upon so early in the season, but as a whole, I think it was a great start to the season.”

The skater had a rough start in his freeskate, missing two planned elements, but was clean from then on.

“I am almost more proud that I was able to come back strongly after a rough beginning as opposed to having started well,” said Razzano. “I got a lot of good feedback in my evaluation the morning after, and I’m ready to push onward and upward to Champs Camp in two weeks.”

“His two performances at Skate Detroit were right about where we want him to be right now,” said Doug Ladret. “Good performances with a couple of mistakes showing the newness of the programs. We are planning on his season to go well into the new year, so at present, he is right on track.”

Razzano is excited about his new short program–a flamenco to “Ameska” by the Taalbi Brothers.

“It was the music that was used on Dancing with the Stars for one of the Macy’s Stars of Dance routines,” he revealed.

His free skate is to Rachmaninov’s “Piano Concerto No. 2”.

“It’s classic, recognizable, and so full of emotion,” said Razzano, who trains in Scottsdale, Ariz.

“Douglas is setting himself up for a great year,” added Doug Ladret. “He is in great physical shape right now and starting to get some mileage on his two new programs.”

The skater, who works with Grant Rorvick to polish the choreography of his programs, is working with Ben Agosto, who recently relocated to Scottsdale, to enhance specifically the short program.

“Ben is unbelievably talented and I am very excited to be working with him,” said Razzano, who does most of his own choreography. “Doug also contributes to them and is there to oversee the work and make sure I’m on track.”

Razzano puts in two to three hours a day, five days a week on the ice.

“Off ice, I run and do Pilates-like exercise, which are the core of my work out. Running is so beneficial for stamina and I also find it very therapeutic.”

Razzano had a busy spring which included show performances in Moorhead, Minn, and Harlem, NY. He also attended a few USFS Components Camps as an athlete representative and at Governing Council in Seattle, Wash.

“It was a whirlwind, but I love it and am so happy to give my time back to my sport,” he said. “While I was home, I choreographed a few programs for some of the skaters at my rink. For me, choreography is like playtime, a challenge, and I love it more and more every time I do it.”

Last month, Razzano performed at An Evening on Ice in El Segundo, Calif.

“It was fantastic!” he said. “The cast was other-worldly, everyone skated well, and it was an honor to be able to skate among a group of that caliber. It was also nice to debut my short program in front of an audience.”