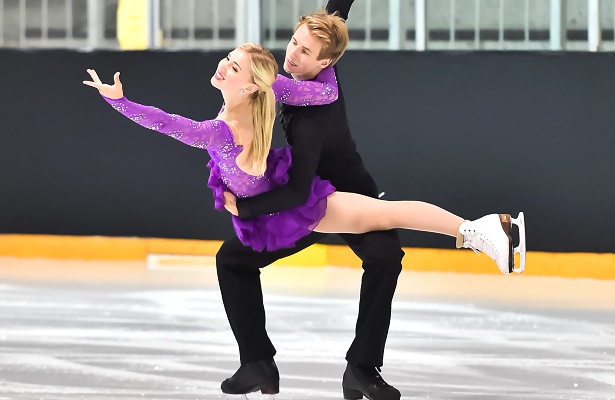 Like many other ice dance teams, Canada’s Mackenzie Bent and Garrett MacKeen struggled with creating both a senior and a junior short dance while waiting for the International Skating Union (ISU) to issue definitive age requirements for competing internationally at the junior level.

“We put a lot of thought into the decision before finally deciding we would train for both scenarios, and we know many other teams who were in similar positions,” said Bent. “Pushing through the past couple of months was difficult, because we were unsure and not in control of what would happen.”

Nevertheless, the Canadian junior champions believe that their hard has work paid off. They recently debuted this season’s programs at the Minto Summer Skate.

“We felt great about the performances we put out there,” said Bent. “We received some awesome feedback, and have already been making changes and improvements for the Junior Grand Prix season. There were a few levels we had to review, but they seemed to be fairly simple fixes.”

“Finally, we are extremely excited for the season,” said Bent. “Sadly, we had a few teams split this year where we train; however, this has led to some new partnerships and each team can’t wait to start the season. Garrett and I have almost been feeding off of their energy. We feel their excitement and it’s created a great training environment for everyone.”

The team, who is coached by Carol Lane and Juris Razgulajevs, wants their programs to be clearly different from any they’ve done in the past. They are seeking to raise their difficulty and display a change of style. For the junior short dance, they will be skating to the required rumba rhythms combined with the samba.

“The rumba we’re using is ‘Vida Loca’ by Francisco Cespedes, and our samba is ‘Straight to Memphis’ by Club Des Belugas,” said 17-year-old Bent. “Garrett found the samba, and I found the rumba, and we absolutely love both!”

Bent and MacKeen are still working on their new senior short dance, and plan to present it at the upcoming Skate Canada Challenge in December.

“Carol and Juris did the choreography for both of our short dances, and like every year, it’s wonderful working with them,” said Bent. “On top of that, our ballroom coach Joel Woods has worked a ton with us on both the paso and samba dances off the ice for the classic ballroom approach, as well as on the ice touching up each program.”

“We love incorporating the ballroom feel into our programs, and we continually try to relate this dancing into all of our programs,” added MacKeen, 20.

The ice dancers took a different approach in their free dance this year, collaborating with former training mate Asher Hill with oversight from Carol and Juris.

“This was an incredible experience!” said Bent. “As many may know, we’ve trained with Asher and his past partner Kharis (Ralph) for years. We love both of them and have an incredible respect for each of them and what both are capable of.”

“After all those years we’ve become very close friends, which made the experience that much better,” added MacKeen. “We love what he’s done with the program and had an incredible time throwing our ideas in the mix along with Carol’s and Juris’.”

The ice dancers will be using music from Once Upon a Time for their free dance which they’ve entitled “The Red Queen.”

“It’s almost a fairy tale,” said MacKeen, “but twisted and turned upside down. It’s quite different from what we’ve ever done in the past.” “We jokingly tell Asher he should stop spending so much time by himself,” laughed Bent.

“I play a princess and Garrett is my knight in shining armor,” explained Bent. “Then I unexpectedly turn into an evil queen and muster up a lot of hatred and try to rip his heart out!”

“As you can imagine, it was quite a challenge this year to prepare programs,” said Lane. “The two short dances are so different this year from junior to senior, but having Asher on board with the free dance choreography was a such a joyous experience.”

“Asher told me at least once every day he was terrified,” Lane explained, smiling. “He said didn’t know how Juris and I did all those programs, and that he was losing sleep at night doing just one. We are all very happy with how the programs are coming together, and I think Mackenzie and Garrett are ready to show a new side this season.”

After placing 12th at the 2014 World Junior Figure Skating Championships, the team hopes to improve on their results internationally this season. They would also like to see strong performances in their national senior debut.

“We are determined to improve and push our limits,” said Bent.

“With all the new changes to the ISU rules, it’s been a heck of an experience playing around with everything and figuring out what we can and cannot do,” said MacKeen. “We really look forward to seeing how it all plays out.”

The ice dancers have been mostly focused on the twizzles and their two pattern dances.

“The rules have changed so much in regards to many things,” acknowledged MacKeen. “With the twizzles, we had to play around and really see what we were capable of, as well as what worked with the music.”

“On top of that, it’s certainly different focusing on two pattern dances this year,” added Bent. “This might be to our advantage, though, as we love working with the dances and seeing what we can do to make each one our own.”

“The two dances are so different and the new rules for the second paso pattern have certainly been enjoyable to not only choreograph, but also to see what the other teams we train with have created,” she continued.

“I’m all ‘Sheldon Cooper’ about planning,” Lane commented, “so I actually enjoyed the process of preparing two different short dances. “It’s a great challenge and a lot of preparation to get it all done, but Kenzie and Garrett are enjoying the extra work, and are excited to show yet another facet to their creativity.”

Bent and MacKeen will be competing next week at Czech Skate 2014, a Junior Grand Prix event in Ostrava, Czech Republic.