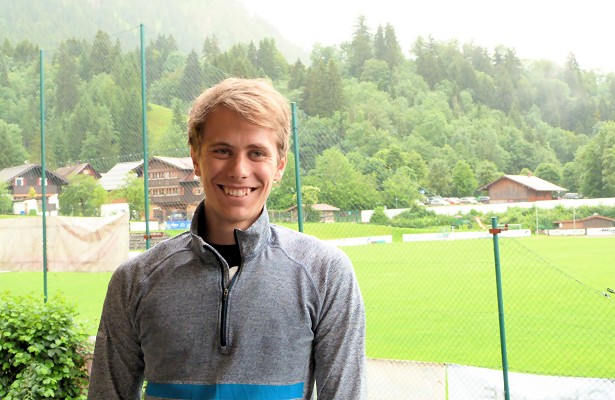 The Olympic season ended in the worst possible way for the Czech Republic’s Michal Brezina when he limped off the ice after the short program at the 2014 ISU World Figure Skating Championships in Saitama, Japan.

The skater had to withdraw from the event as he strained ligaments after twisting his right ankle in a botched triple flip take-off. Fortunately, the injury was not as bad as it initially looked.

“It went away in like two weeks,” said Brezina. “I didn’t do any major damage. I just strained the middle tendon in the ankle. That’s why it hurt so much.”

Brezina credited the Italian team doctors for providing help when they put his ankle into a cast right away. The accident itself came totally unexpected to the skater.

“I looked at the video a lot of times after that, and you can really see my ankle going like this,” he said, demonstrating the bend with his hand. “I wanted to see how it happened. I still couldn’t believe I did what I did, because the day before in practice I did a clean short.”

Brezina realizes there is not much he can do to prevent things like this from happening.

“I just have to make my ankle stronger,” he said. “You can go with your toe into somebody else’s take off and your ankle can twist the same way. I have a lot of exercises actually for my shoulders and for my back, so I just add a couple of more for my ankle.”

After worlds, Brezina decided to return to Germany, mostly due to financial reasons. The skater had spent the previous two years training in Hackensack, New Jersey, under the tutelage of Olympic Champion Viktor Petrenko.

“It was very expensive to train in the States,” the athlete pointed out. “The two years I was there I got everything paid by the federation. We had enough money for the two years, because it was before the Olympics.”

In July, the 24-year-old returned to his former training base in Oberstdorf, Germany, to train under to Karel Fajfr. He is currently testing out new styles for himself, and is looking forward to proving himself in the upcoming season.

The picturesque mountain resort of Oberstdorf provides excellent conditions for top-level skaters, and Brezina is currently the sole world-class single skater there right now. He would have preferred to train alongside direct competitors, but realizes the benefits of practicing with other skaters that are younger and not at the same level.

“I always need some kind of competition even in practice,” said the 2013 European bronze medalist. “Actually, it’s not that bad, but we have five guys (in practice). They are trying so hard to do everything and then I can help them.”

The former Czech champion keeps an eye on them in practice and gives them advice. While he might sometimes appear a bit distant, he is in fact approachable and helpful.

“It actually makes me feel good if I can help and if I can show them something, because then I can go and say, “watch” and I can do the jump for them,” said Brezina. “It is actually almost the same as if I had a same-level competitor on the ice.”

Although Brezina misses the 20 minute drive to New York City, he appreciates his new-old environment.

“Everything looks the same, not much has changed,” he said. “I spend most of the time at the rink anyway. I just have to get used to the fact that there is not much that I can do (outside the rink) which I think is good, because there is not too much distraction from the training.

“The biggest thing that I have to get used to is that my girlfriend is not here,” the athlete noted, regarding Israeli skater Danielle Montalbano. “I hope to see her at Nebelhorn Trophy.”

Brezina himself will be at Nebelhorn Trophy where he will present his new programs. He is now working with Swiss choreographer Salomé Brunner, who is known for her work with two-time World Champion Stéphane Lambiel.

For the long program he picked something new for himself and is skating to classical music—a medley from The Marriage of Figaro by Wolfgang Amadeus Mozart.

“It was different (to work with Brunner), especially because the music that I have is different from everything that I ever skated to,” explained the two-time Olympian. “I thought about it a lot when I chose the music. I thought I needed to try someone who always did classical music and I don’t think there was any skater that was better with classical music than Stéphane (Lambiel).”

So far, Brezina is pleased with his choice.

“I always had something (music) from a movie,” he acknowledged. “It’s definitely different, but I like it. A lot of people that saw it said it fits me pretty well.”

For the short program, the 2013 European bronze medalist chose a cello version of the main theme from the popular fantasy series Game of Thrones.

“They are two completely different programs,” said Brezina. “I think that’s one of the things that I wanted to do. I wanted to do it last year, but I didn’t think I was ready. So we chose it this year.”

As for the elements, the skater plans to include one quad in the short program, and three quads – two toes and one Salchow – in the long program.

“The toe was actually doing pretty well. The Sal is the same as it was, and if I can do it in competitions, it’s just more points,” Brezina said matter-of-factly.

“In the short we’re probably keeping one quad, we’re not going crazy,” he continued with a laugh. “I think the short is really important for the whole competition. If I can do a clean short with a quad combination, I think that’s better than going for the risk with two quads and messing it up and losing a lot of points.”

Off the ice, Brezina plans to take coaching tests in the Czech Republic and start studying for his coaching diploma in the fall.

In September, the Czech hopes to compete at Lombardia Trophy in Italy before the Nebelhorn Trophy in Oberstdorf. He has also been assigned to Skate Canada and Cup of Russia for his Grand Prix events.

At present, the skater does not want to get too ambitious in terms of goals for the rest of the season.