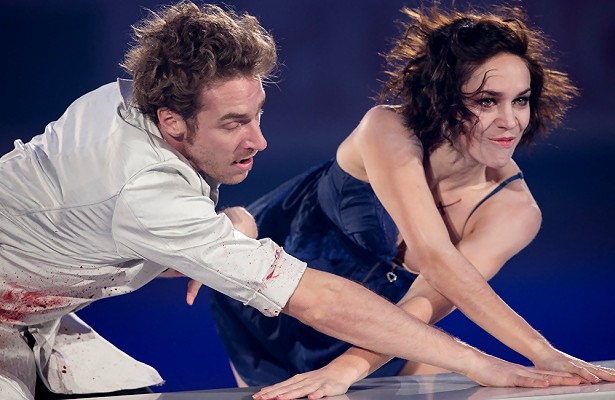 France’s Nathalie Pechalat and Fabian Bourzat perform an exhibition to “People are Strange” by The Doors.

French ice dancers Nathalie Pechalat and Fabian Bourzat are long-time fan favorites, mostly due to their originality. They were always looking for something new and different—not only in their exhibition programs—but also in their competitive routines.

Their distinguished competitive career came to an end when the team competed for the last time at the 2014 World Figure Skating Championships where they captured their second world bronze medal.

Pechalat, 30, and Bourzat, 33, had originally planned to retire completely from skating, however, they have been receiving so many offers to perform in shows that they decided to stay in the business for a little while longer.

“We still have some shows scheduled in Japan this summer, then we’ll do some shows in France,” said Bourzat. “We plan to perform there next season in the summer, and maybe again in Denis Ten’s shows. If we have the chance to do it, the tour of the French team as well.”

Some of their favorite moments include when they qualified for their first Olympics in 2006, claimed their first European title in 2011, and their free dance performances at both the 2012 and 2014 World Championships.

Bourzat especially fondly remembers their performance of their “Cats” free dance, his favorite program, at the Cup of China in fall 2004.

“That was a big moment with the audience,” he recalled, smiling. “This was the first program we really did research for and really had artistic creativity. For us, this was the beginning of the creativity that we had.”

It is hard for Pechalat to choose her favorite dance.

“I love ‘Circus’ (2009-10) most of all because of the construction process,” she said. “When we put it together, it was just great. I loved ‘Charlie Chaplin’ (2010-11) because it brought us our first medal (gold at the European Championships). It was beautiful. And finally the last one, ‘Le Petit Prince et sa Rose’ (2013-14) because it was poetic, it is French, and it suited us well. I loved to skate it, and we had the level we needed to perform it correctly.”

As with nearly all elite athletes, the team had to go through some tough times as well.

“The most difficult ones were the injuries, for sure,” acknowledged Bourzat. “When we couldn’t participate in a competition, this was always the hardest thing to deal with. There is always a moment of doubt if you are able to come back.”

As most in the skating world know, one of the most difficult moments of their career happened in Moscow at the 2011 World Championships when the French fell during the step sequence in their “Charlie Chaplin” free dance and slipped from third to fourth place.

“Outside of competition, what was difficult was to say goodbye to our coaches when we had to change coaches,” said Pechalat. “That wasn’t always easy, never easy in fact, but we stayed true to our artistry and our strategy. There were difficult moments that we had to go through, but I think we made good choices.”

The athletes trained for eight years in France under Muriel Zazoui and Romain Haguenauer before joining Alexander Zhulin in Moscow in summer 2008. They were more or less forced to leave him in 2011 as the Russian Figure Skating Federation did not want Zhulin to coach Russian ice dance rivals with the upcoming 2014 Olympic Games. As a result, they relocated to Detroit, Mich., to work with Anjelika Krylova and Pasquale Camerlengo.

For their final season, Pechalat and Bourzat switched coaches one more time, this time at the request of the French Figure Skating Federation, to work with Igor Shpilband.

While they are currently enjoying performing in shows, the five-time National Champions are looking beyond that.

“Fabian wants to work as a coach and I want to have a life in Paris, so we’ll have to compromise with that,” said Pechalat. “So we are giving ourselves one or two more years to do shows and we’ll stop after that. It is not finished, but it won’t last five or ten years.”

“I was an expat for six years—three years in Moscow and three years in Detroit, so I am looking forward to being home in Paris, France,” she added. “I want to have a life that is a bit more normal because it was tough for me to be on the move all the time.”

Bourzat will be based in Detroit where he will start as an assistant for Igor Shpilband and will also work as a choreographer. One of his first students will be his former teammate, Florent Amodio.

Pechalat, on the other hand, is looking for work outside an ice rink. She studied management and wants to explore options within sports marketing. She would like to become a technical specialist for ice dance as well, but she first needs to observe a waiting period.

It is always difficult to transition into something new after having spent many years doing the same thing, however, the French dancers are content with the past and are embracing the future.

“We are very pleased (with our competitive career),” said Bourzat. “We really enjoyed our last programs and we performed well in our last two competitions. We are also very happy to finally have finished that career.”

“Yes, we are relieved to have finished competing,” Pechalat agreed. “I loved it, we worked for it. Now we are doing shows and that’s fun and we enjoy it. We (like spending) time with our skating friends and having a good time.”

Pechalat feels they had a good run with their competitive career, but realizes that the results are not the only thing that is important.

“What counts as well are the people that we met on the way and what we were able to give to our sport—what it brought to us in terms of travelling and meetings,” she said. “It was a very enriching experience.”