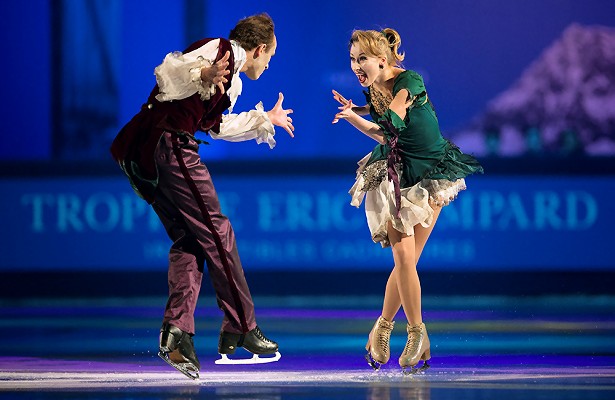 Germany’s Nelli Zhiganshina and Alexander Gazsi are popular with fans for their fun programs and their acting skills. Although their focus is on performing for a crowd, the team is hoping to improve their results from the past season where they finished seventh at the ISU European Championships and 11th at the ISU World Championships and Olympic Winter Games.

For the upcoming season, the Zhiganshina and Gazsi are exploring new directions. They have hired Stéphane Lambiel, who has never done choreography for ice dancers, to create their new programs.

It began with the flamenco portion of their short dance. Zhiganshina and Gazsi asked Lambiel if he would assist and he agreed, as he had taken a lot of Flamenco lessons for his Poeta program a few years ago.

The dancers, who are both members of the German Army, had to attend military seminars in Hannover, Germany, so they met with Lambiel on their days off in Dortmund.

“We had a lot of fun together,” recalled Gazsi, but he acknowledged that there was a certain risk. “We did have some second thoughts if would work or not, but we never had to tell him that. It worked perfectly from the very beginning.”

“We asked ourselves ‘How can it work? He doesn’t know any positions,'” agreed Zhiganshina, who was initially concerned about Lambiel’s lack of ice dance experience. “He showed us right away! ‘Do this position’, ‘take this hand’, ‘change here’…It was incredible.”

As always, the dancers were searching for music for the short dance that nobody else was using. In fact, Gazsi had found the music a few years ago and saved it for later. The program is set to a traditional flamenco piece entitled “La Maza” and is performed by Mercedes Soza and Shakira.

The skaters were pleased with Lambiel’s work, and asked him to choreograph their free dance as well. They weren’t sure what they wanted to do, so in early June, they went to Champéry, Switzerland where Lambiel had opened a school.

The first day at the school, the three were listening to music on Lambiel’s iPod and decided on Swan Lake, however, Tchaikovski’s well-known music can hardly be recognized in this version.

“We are trying, of course, to stay true to our concept and do something different,” said Gazsi, 29. “We set the goal for ourselves to push the comedy style that we grew used to aside this time.”

“We also wanted to do something different for ourselves,” added his partner.

The result is a modern dance with interesting transitions and high speed. Zhiganshina absolutely loves the music.

“It is almost embarrassing to say, but I even listened to our music when we were on vacation,” the 27-year-old shared. “I never liked the music so much that I would listen to it during vacation.”

Gazsi also feels that the music is perfect for them this season, in both dances.

“I think it will be a bang in a big rink with a real stereo,” he said. “We are looking forward to the reactions.”

“We want to stay true to ourselves and we need to do something that everybody will talk about,” Gazsi added with a grin.

During the 2012-13 season, the dancers drew attention with their “Zombie” costumes, and in 2013-14 with the fact that they used the same costume for short and free dance. The five-time German champions will collaborate with their long-time tailor, Irina Katasonova, in Moscow, Russia, on this season’s designs.

Lambiel visited Zhiganshina and Gazsi in Oberstdorf in July to polish their programs. The skaters are planning to spend the enitre summer at their training base in Oberstdorf. They are not sure yet where and when they will compete first in the season. They feel they started a little late due to army obligations, so Nebelhorn Trophy might come too early.

“We will have to do something before the Grand Prix for sure,” said Gazsi. “We got Canada and Japan, which is good, [but] we have quite a bit of time in between.”

They are considering debuting their programs at Finlandia Trophy or Ondrej Nepela Trophy, however, Gazsi is already thinking of the end of the season.

“We are really looking forward to skating in front of a large audience,” he said. “It does make a huge difference for us when there is a big audience and TV cameras.”

“Our programs are made for the cameras,” Gazsi explained. “The audience reacts when they see you on the big video screens. It does play a role for us whether we are skating in front of 18,000 people in Saitama or just in front of the judges in Bratislava.”

“Saitama was crazy,” he added. “The audience reacts to each move you make, because they see it on the screen.”

The joy of performing and the quest to entertain the audience is what drives Zhiganshina and Gazsi.

“We’ve said it many times, but it really is the case,” Gazsi pointed out. “We are now skating for the audience and for ourselves.”

“We’ll see where we’ll end up this year,” he said. “Obviously, we know that quite a few (ice dancers) have left, but new teams are coming up. There were a lot of changes in Russia, and the juniors from North America are very strong.”

The Germans have said that they are planning to skate one more season after the Olympic Games in Sochi, however, this is not set in stone.

“Unfortunately, we have huge problems in ice dance in Germany now,” Gazsi noted. “Everything has collapsed.”

He is referring to the break-up and retirement of Tanja Kolbe and Stefano Caruso, and the possible break-up of Shari Koch and Christian Nüchtern.

“We’ll see what we’ll do,” the dancer concluded with a smile. “It depends on the season. It also depends on the German Skating Federation. This season, first of all, is important to us now, because we have cool programs.”