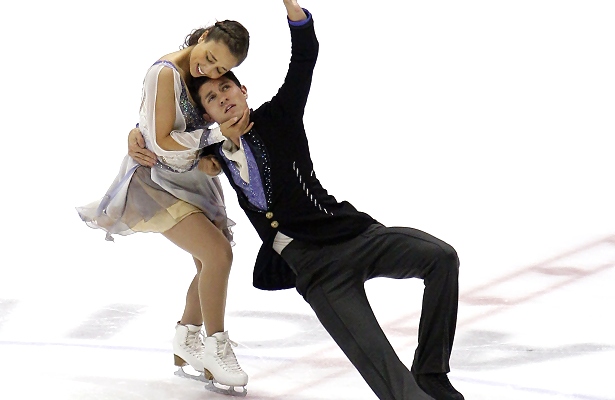 USA’s Anastasia Cannuscio and Colin McManus feel rejuvenated after spending a month this summer in Montreal, Can., working with Patrice Lauzon and Marie-France Dubreuil.

“As a team, we’ve never trained with anyone other than our current coaches, so that was a major change for us,” said Cannuscio. “Our coaches felt that it was time for us to expand and gain new motivations and ideas.”

Cannuscio, 22, and McManus, 24, who train under Karen Ludington, Christie Moxley-Hutson, and Alexandr Kirsanov at the University of Delaware in Newark, Del., met with Lauzon last November at the Ice Challenge.

“We made the decision as a whole team and at the suggestion of our coaches,” said McManus. “We all agreed that training in Montreal would broaden our horizons.”

“The goal was to get a fresh outlook on our programs and skating style,” added Cannuscio. “We took advantage of everything they had to offer us. For the most part, we have been training alone since national.”

Ludington agreed, adding that training with international teams in a motivated environment would be beneficial to them.

“We had a clear plan for Stasia and Colin to get the most out of their time at Patrice and Marie France’s dance program,” she said. “We made sure both the short and free programs and the elements were complete before they left Delaware so that while they were in Canada, they could further develop and enhance their material. This also allowed them to stay on schedule and be prepared for the competitive season.”

Cannuscio and McManus, who placed seventh last year at nationals, both agree that it was just what they needed and that the whole team in Montreal had a strong influence on them.

“It was truly a breath of fresh air and they helped us to grow as skaters and as a team,” said McManus. “Our coaches are still in communication with them, and we hope to see Marie and Patrice again in the near future.”

“All of the coaching and choreography has come together so cohesively, and we could not be happier with the way things are,” added Cannuscio.

The ice dancers, who are competing in their seventh year together, recently competed at the 2014 U.S. International Figure Skating Classic where they finished in third place.

“I thought it was a good start to our international season,” said McManus. “It was our third consecutive US International Classic, so we felt like the third time was a charm when we headed home with the bronze.”

“We had a couple of bobbles and small mistakes in the short dance,” noted Cannuscio. “I felt that it was performed well, but the technical side wasn’t executed as well.”

McManus agreed, adding that they always felt this competition had been a curse for them as something goes wrong every year.

“This year it was in the short dance!” he said. “We had a minor collision on the end of our twizzle sequence. I think we knew the potential was there for a top three finish, and I believe I skated a bit scared knowing what was at stake.”

“We didn’t attack it the way a Paso Doble/Flamenco style program should be attacked,” he added. “It demands presence and power right out of the gate, and I think we were just too afraid to make mistakes, and ended up holding back a bit.”

“Our free dance went much better,” said Cannuscio. “It was much cleaner, and I thought we were able to perform it really well. Some of our levels weren’t as high as we’d like, but we know what to improve upon. We’ve gotten a lot of good feedback on the free dance, and I’m very excited to continue to train it and let it grow!”

McManus said they tried to change their focus for the free dance and concentrate on the performance and the characters, and that this mentality paid off for them.

“Though we had minor level issues, I felt that we skated a strong free dance overall,” he said. “We have already made so many changes and reconstructed a few big sections, so I was really happy with how the program felt for the amount of new material we put in for this competition.”

The team was assigned a Grand Prix event—Skate America—which will take place in later next month in Chicago, Ill.

“I am pleased to see that the all the changes are working and I feel we are heading in the right direction for Skate America,” said McManus. “We are excited to see how the programs grow from here!”

However, the main goal for the 2013 Ice Challenge champions this season is to show that they are making huge strides towards improvement.

“We have expanded and grown so much over the summer,” said Cannuscio. “We want to get back on the Grand Prix circuit, earn more international medals, and be on the podium at Nationals.”

“We want to earn our spot in the top group of this highly competitive country,” added McManus. “This is the year to make a splash, and that’s exactly what we want to do.”

This season, the team is using “Hora Zero” by Rodrigo y Gabriella and “Ameksa” by Taalbi Brothers for the short dance.

“The music is more based on the Flamenco style,” explained Cannuscio. “We felt that the speed and power of the music complimented our skating style.”

The ice dancers are performing to “Danse Macabre” and “Transylvania Lullaby” for the free dance, and are excited to be showing a different style that is a dramatic departure from what they normally do.

“We are taking a “creepy contemporary” twist on the classic Saint-Saens piece,” McManus said. “We are portraying the story of a dead couple who comes to life after midnight and dances the night away, but they must return to their grave when the sun starts to rise.”

Coaches Ludington and Kirsanov choreographed both the short and free dances.

Over the summer, the former U.S. Junior bronze medalists worked on new lifts–an area they really want to show they’ve improved in.

“Other than lifts, I think what you will see different this season is maturity in our skating,” said McManus. “We think our programs this year bring out a completely different side of us, and hope everyone will see refined and polished programs, as well as more mature performances.”

Ludington wants the ice dancers to experience a true sense of accomplishment by achieving what they have been working towards these last six years.

“During our pre-season meeting, they said that they wanted to do whatever it would take to make this a breakout year,” said the coach. “We chose to shake things up in their training. They are on a new off-ice training program, and their daily approach to training is centered and on task.”

“The year after the Olympics is full of opportunities, and we want to take full advantage of everything that we get,” he concluded. “We are excited to see how the rest of our season shapes up from here, but we are focused on having a great showing in Chicago.”

Before going to Skate America, however, the team first will compete at Finlandia Trophy—another Senior B event—in Espoo, Finland.