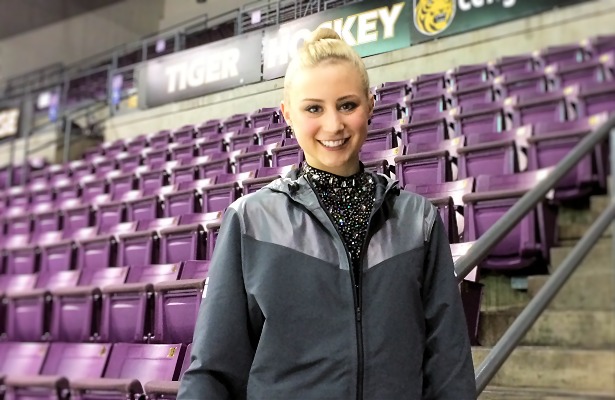 USA’s Ashley Cain will make her first appearance at the Grand Prix in the Ladies’ discipline this fall at the Cup of China and Rostelecom Cup.

“I am so excited and honored that I was picked for two Grand Prixs this season,” said the 2012 U.S. Junior silver medalist. “Being able to represent my country on the big stage and compete against the world’s best is absolutely incredible. I hope to show everyone how hard I have been working and to learn so much from this opportunity I have been given.”

While it will be her debut on the Grand Prix circuit as a single skater, Cain first competed at Cup of Russia in 2012 with former partner Joshua Reagan in the Pairs event where they finished sixth.

The 19-year-old kicked off her season earlier this summer at Skate Dallas, Broadmoor Open, and Skate Milwaukee. She also appeared at the Philadelphia Summer Championships to break in new skates and participate in the technical feedback sessions after being chosen to attend Champs Camp.

“I feel like at each of these competition I showed that I am ready early in the season,” said Cain, who trains in Euless, Texas. “Each competition was a great opportunity to gain feedback on the programs to see if anything needed to be altered before I go to my Grand Prixs.”

The skater also participated in several ice shows over the summer, including Parker Pennington’s Skate, Dance Dream, Shaker Heights Skating Spectacular, Lake Placid Summer Ice Show, and her own rink’s summer show, Our Disney Favorites on Ice. She is also honored to be invited to skate in An Evening with Champions this month at Harvard.

“I love doing shows,” said Cain. “They really benefit me and allow me to learn how to relate to a crowd more. It also gives me an opportunity to skate with people watching me, just like in competition.”

Cain’s goals for this season are to make the top three at nationals and earn a spot on the world team.

“They are big goals, but I feel like I am capable of them,” she said. “I set a goal for each competition of what I want to achieve. For every competition, my goal is different, and this helps me to have a plan of attack when I go out to perform.”

This season, Cain, who is coached by her parents Darlene and Peter Cain, will be skating to music from Mission Impossible for the short program, and Evita for the long.

“I feel like my components will be different this year because I am exploring new music styles,” she said. “These two pieces are unlike any other pieces I have skated to before. In both pieces I will be telling a story, so I am excited to see how these stories relate to the audience and judges.”

Scott Brown, who has worked with Cain for four years, did the choreography for both routines.

“He is such a great choreographer and person, and I am so happy that he is a part of my team,” said Cain. “I am very lucky to have these three people with me to guide me and allow me to learn and discover new things.”

The 2013 Nebelhorn Trophy bronze medalist wants to show a different side to her skating this season, both technically and mentally.

“The consistency of my jumps has increased quite a bit since nationals,” said the skater. “My coaches have really helped me with that by doing more repetitions, doing them even when things don’t feel right, and also by trying new jump combos and entrances.”

“In the past, I was always doing my combos with a triple toe on the end, but since the triple loop is my favorite and most consistent jump, we decided to try out combos with that instead,” she said.

Cain has also been working with a sports psychologist to work on the mental aspect of the sport.

“Sports in general take so much mental capability, so an athlete needs to find that balance between the physical and mental side of the sport,” she explained. “Working with my sports psychologist has helped me tremendously with competing easier and training smarter.”

“I would say that I am mentally a lot stronger,” Cain continued. “This allows me to be more confident out on the ice and to execute my elements stronger. I’m not saying that I am 100 percent all the time or that I won’t mess up, but I will definitely be able to deal with those obstacles a little better.”

The skater recently returned from Champs Camp, a performance-based camp in Colorado Springs, Colo., and is currently scheduled to compete next month at the 22nd Ondrej Nepela Trophy in Bratislava, Slovakia.