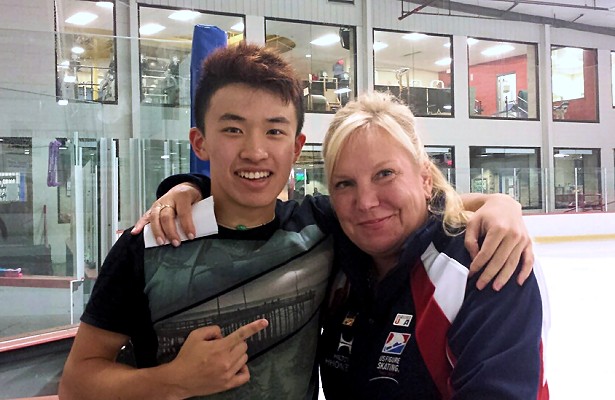 USA’s Jimmy Ma with coach Elaine Zayak at the at the Ice House in Hackensack, NJ.

USA’s Jimmy Ma is competing as a senior on the national level this year, and is hoping for a good showing at the 2015 US Figure Skating Championships in January.

“First year nationals, especially at the senior level, is pretty difficult,” acknowledged the skater, who is coached by Elaine Zayak. “These veteran guys know the game, how to train, and have lots of experience. My goal there is just to have a good showing and land the quad.”

Ma is still competing as a junior internationally, and recently participated at the Junior Grand Prix in Nagoya, Japan, where he finished 14th.

“I had lot of confidence going in, especially for the long program,” Ma said dismally. “I’ve skated so many solid clean ones in practice, and that really got me excited for this competition.”

In the short, Ma opened with a solid double Axel, but then underrotated the back side of a triple flip-triple toe, as well as the triple Lutz later in his routine.

“My coach told me to just do a triple-double, but I didn’t listen,” he said. “That won’t happen again. I would rather fall then not commit to a jump. I’d rather have a good triple-double then a bad triple-triple.”

While the practice for the long went well, Ma lost focus and confidence, and suffered a few falls.

“The standard was very high at this event and there were some tough skaters,” he acknowledged. “I think this got at me during the short, so I started having doubts. After I messed up the first jump, everything just fell apart.”

Ma, who trains in Hackensack N.J., is now focusing on Eastern sectionals, which will take place later next month in Wake Forest, N.C.

“We are reworking everything now,” he said, “warm-up, posture, presentation…everything. It’s a process, but it’s got to happen. That’s the plan and we are taking it one step at a time.”

Although Ma wants to have clean and consistent skates, putting the quad in both the short and long program is one of his biggest goals this year.

“There are so many people in the world that can do a quad, and I prefer going for that first,” said the 18-year-old. “I’m a late bloomer and didn’t get my triples until recently. My triple toe is much better than my double Axel, so the plan is to move forward with the quad toe.”

Ma’s coaching team also includes Hongyun Liu and Steven Rice, while Josh Babb does his choreography. Over the summer, the skater also worked with Nina Petrenko to improve his footwork.

“I wanted to make sure all the edges and the details were in place,” he said. “I just want to maintain a good work ethic and focus on everything as a whole so there’s nothing left out.”

The skater also hopes to earn a spot on the Junior World team this year.

“Jimmy has experienced many challenges this season, not unlike many great athletes,” noted Zayak, “but he has always maintained a positive attitude and steady work ethic that delivers results when it counts! I anticipate significant growth in his skills and performance this season.”

This year, the skater is performing to “Grand Guignol” by Bajofondo Tango Club for the short program, and “Adios Nonino” by Astor Piazolla for the long.

“I really click with this music,” said Ma. “It’s hard to find classical music that really excites me yet is still mature. I get these really cool feelings when I listen to tango music. It’s sexy, it’s exciting, and very sophisticated.

“The long program is 100 percent tango, while the short has a “tango-esque” feel to it,” he added. “It wasn’t intentional that I picked out similar music for both programs. I just liked both pieces.”

Ma, an accomplished piano player, added that his music selections were probably influenced by his years of music study.”

“My mom and my dad really wanted me to have music in my life,” he explained, regarding learning to play the piano. “Having that musicality in my life really helped so much with my skating.”

Playing the piano is just a hobby for the skater these days.

Ma took a year off from studying last season, but is now attending Fordham University where he is taking business courses.

“I’m really not ready to choose a career path right now,” he said. “I am pursuing both my skating career and educational journey moving forward. My family and coaches are all collaborating to fulfill my training commitments and realize my dream of becoming an Olympian.”

Ma’s parents are from China, and the skater speaks Chinese fluently—both Mandarin and Cantonese—but not because he wanted to.

“My mom made this rule that she would not listen to me if I spoke English in the house because she wanted me to be bilingual,” he said, laughing. “I don’t know how my mom does it, but she has this weird intuition about where she says something’s going to happen and it happens.”

“We call ourselves ABC boys—American Born Chinese people,” he explained. “There’s a very common stereotype that we speak English well, but don’t know Chinese because it’s America. My mom’s like ‘you know, that can’t happen’. She pointed out to me that if I ever get into business, one of the biggest international cities for business is Hong Kong. ‘So you have to learn it.'”

When not studying or training, Ma enjoys watching TV, listening to music, and card flourishing.