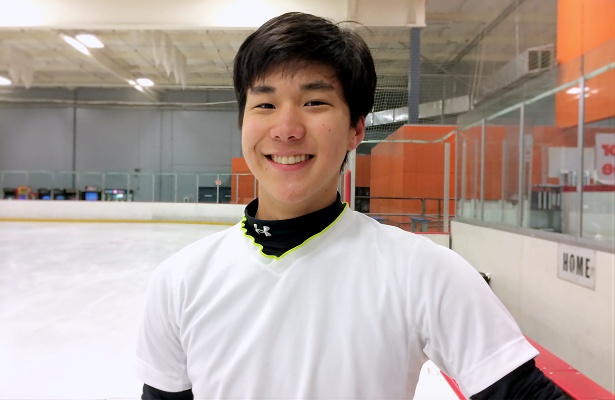 USA’s Shotaro Omori gets ready for practice in Riverside, Calif.

“Although I didn’t skate like I had wanted to, I believe that every competition has a high where you can learn from every experience for the future!” said the skater, who is coached by Tammy Gambill. “I learned in Slovenia that I need to trust in my training and believe in myself completely.”

“The past few months of training have been going very well,” he added. “For me, it’s all about making that transition into the competition.”

The 18-year-old also had the opportunity to take in some sights and visited the city of Ljubljana with the Japanese team.

“It’s always a great privilege to be able to travel for the USA, and being able to communicate with athletes from another country is always so exciting!” he said. “We walked for a few hours just soaking in the sights and festivities of the Slovenian people and I also enjoyed a steak for the first time in my life. It was delicious! It was an experience I’ll never forget!”

Omori, who is competing as a senior on the national level this year, kicked off the season at the LA Open in June and competed again last month at Glacier Falls.

“The local summer competitions are always a lot of fun and are great practices for internationals later in the season,” said Omori, who resides in La Mirada, Calif. “I especially look forward to competing at Glacier Falls every year as it is an exciting event and a chance to meet with a lot of friends and skaters visiting southern California for the event!”

“My main goal was to just skate with more confidence regardless of how the jumps went,” said the 2013 U.S. national junior silver medalist. “My programs were very well-received by the local panels, so I was very happy about that.”

After much discussion, Omori and his coach decided he would compete as a junior internationally as he has one more year of age eligibility. One of his main goals, however, is to make the top 10 ten at U.S. Nationals on the senior level.

“I would be extremely ecstatic just to be there!” said the 2013 World Junior bronze medalist. “It has always been a dream of mine since I was very young to be competing at the highest level of the national championships.”

Last season, Omori suffered two falls in the short program at Junior Worlds and did not reach the final.

“It was very tough for me to have a skate like that,” he said. “Going into the competition, I had very good practices, but just did not have the confidence in myself to skate the same way in the event. Since then, I have been working even harder and really working on just believing in myself again.”

This season, Omori is looking to step outside his comfort zone and try something fresh and different for his programs.

Pillay came up with “Run Boy Run” by Woodkid.

“When I pitched ‘Run Boy Run’ to Shotaro, I think it was the narrative that intrigued him the most,” said Pillay. “The idea of empowerment and change…going from dark to light. I think he really connected with that story line and it seems to help him with the characterization of the program. There’s a joyfulness at the end of the program during the step sequence and my hope is that Shotaro can really let go and skate with a sense of freedom and abandonment.”

“It was a little difficult for me to get used to, but now I really love the program and the change,” said Omori. “The program is really about ‘change and empowerment’. It’s very different from what I’ve done in the past and also has some lyrics.”

The skater is keeping his long program to Rimsky-Korsakov’s “Sheherazade” from last season.

“It’s a wonderful piece that he excels at,” said Gambill. “We feel that he would be able to show two different styles of his skating with these two programs.”

Over the summer, Omori spent some time working on the quad and hopes to add it to his arsenal soon.

“I have been able to land a few in the past few months, so it’s really been about adding consistency to it,” he said.

Omori, who was born in Bellflower, Calif., has roots in Japan where his sister still resides.

“It’s always an incredible experience being fully immersed in the Japanese culture with my family,” he said. “I really admire the people of Japan, and of course, the food in Japan is also the best! Some of my favorite Japanese foods are sushi and ramen.”

“My family and I are very close, so whenever my sister and immediate family in Japan have a chance, we try our best to communicate and stay in touch,” the skater added.

Omori, whose first name ‘Shotaro’ translates to ‘victory’ in Japanese kanji (勝太朗), will compete again in a few weeks at his second JGP in Dresden, Germany.

“My goal for Dresden is to skate a clean short program just like I do everyday in practice!” he said, when asked what would be considered victorious. “I will also be focusing a lot on attacking my long program to put out a solid performance for the event.”

“Every competition I go to, I always focus on what I can do and not focus too much on the placement,” the skater concluded. “If I can go out there and own my skating, regardless of my placement, I would be just as happy as if I won a medal. In my book, that is winning!”