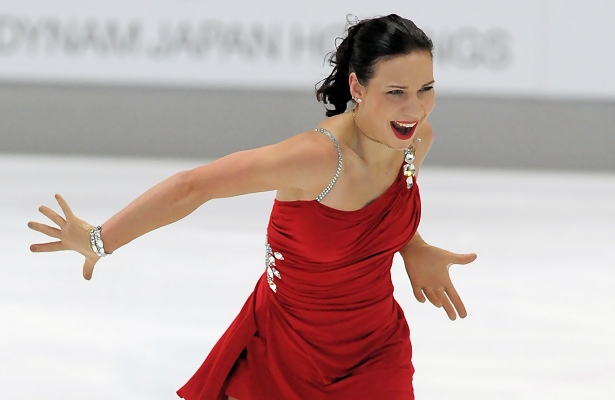 Alena Leonova once spearheaded the wave of talented Russian girls when she won the World Junior title in 2009, and was the first Russian lady in eight years to do so. While she went on to claim silver at Worlds in 2012, the following two years were not as successful. She finished 13th at Worlds in 2013, and as a result, did not qualify for the Olympic team.

Leonova admitted that last season was a tough one, and felt that it began when her short program could not be decided upon.

“We first did a Tango,” she said. “I did it at the test skate and the judges said that they don’t see me in this program and I myself did not really feel it.”

After sustaining a sprained ankle, the veteran skater had to withdraw from Skate Canada—the first of her two Grand Prix events.

“I went to NHK with my old, old program to Pirates of the Caribbean, because we did not have time to put together a new one,” Leonova recalled.

Before Russian Nationals, they were able to create a new program to Russian folk music, and the 2011 Grand Prix Final bronze medalist finally felt prepared.

“I qualified for Europeans and I skated well there. Once I changed the program, everything changed,” Leonova said, laughing.

Leonova knew she was going to be the alternate for the Olympic Games as she was ranked fourth at Europeans, while Julia Lipnitskaya and Adelina Sotnikova took gold and silver. Russia only had two spots.

“I was already happy that I went to Europeans so that the judges could see me, that I am still there and that I did not disappear,” she said. “There are other Olympic Games to come, so I wasn’t too upset. I didn’t really think about it and just skated.”

Unlike some athletes who can’t bear even to watch the Olympic Games on TV when they were not selected, Leonova went to Sochi with an upbeat attitude and enjoyed her time there.

“I really liked it,” she said. “There is no comparison to Canada (Vancouver 2010). It is like earth and sky. I had completely different feelings, maybe because I did not compete, but I went around everywhere and watched. It was a real Olympics.”

Leonova took in some of the skiing events while in Sochi, and noted the team spirit her countrymen displayed.

“I really like to support our athletes,” said the three-time Russian national medalist. “I had flags and painted my face. I was a real fan and I could enjoy it. On the one hand, it was a shame (not competing there), but on the other hand, I was happy for the girls who represented our country. They did a good job!”

Leonova, an Olympian in 2010, decided right away that she would stay in for another cycle. Her first step was to change coaches. She returned to her native St. Petersburg and now works with Evgeni Rukavitsin.

“After the Olympic Games, the financial support in Moscow stopped for us and I could not stay any longer in Novogorsk,” she recalled. “Nikolai Alexandrovitch (Morozov) couldn’t stay there either, so he left for America, and I had to decide what to do.”

The 2012 World silver medalist contacted Rukavitsin and he accepted the offer to work with her. After a show in Korea in May, Leonova joined his group in June.

“I knew that they would demand a lot from me,” acknowledged the athlete regarding working with Rukavitsin and choreographer Olga Glinka. “I was ready for that. I didn’t have any problems with the new team. I basically always got along well with Evgeni Vladimirovitch and his choreographer Olga Glinka. I had skated at this rink before, so I returned home you could say. Everything was very comfortable for me.”

Although she has an apartment close to the ice rink, Leonova currently lives at home with her mother.

“It is boring to live alone and I’d miss my family,” she shared. “Loneliness is the worst thing that can happen to me.”

“And my mother cooks,” Leonova added with a laugh.

This season, the skater has a new Charlie Chaplin-themed short program and is using “Smile,” “City Lights” and “Limelight” from the soundtrack. The routine, which was her idea, was well-received in Oberstdorf, Germany.

“Olga Germanovna (Glinka) came up with the idea to do something completely new for me that nobody had seen yet,” she said. “She wanted to do something very modern. When we tried some moves on the ice, I did not really feel this style, to be honest. So I suggested my version, that is, I suggested Charlie Chaplin.”

While Glinka liked the idea right away, Rukavitsin was against it at first as he felt it was too much in Leonova’s accustomed style.

“When they saw how I skated it, they realized it was still different from what I did before,” Leonova explained. “There is something childlike in it. This program really touches the soul and everybody likes it right away.”

For the long program, the 2009 World Junior Champion decided to give the Tango another try, and is skating to “Asi se baila el Tango” from the Take the Lead soundtrack and “Otono Porteno”.

“I insisted that I would have a Tango in my career,” said Leonova, who asked Olga Volozhinskaia to choreograph the routine. “I hadn’t worked with her since 2011, and I liked how we worked together in the past.”

Many fans and media have written off Leonova, believing that she has no chance in competing against the likes of Sotnikova, Lipnitskaya , Elena Radionova, Anna Pogorilaya and Liza Tuktamysheva, however, the skater remains unfazed.

“I am not looking at others,” she asserted. “I want to prove, first to myself, that I still can skate well and that I can do other elements—not just the (triple) toe-toe.”

Last month, the 23-year-old showed two strong performances at Nebelhorn Trophy in which she placed first in the short program, third in the long, and second overall.

In the long program, Leonova went for a triple flip-triple toe combination, however, the jump was not there yet. The attempt was a surprise for her coach, who thought she would do the triple toe-triple toe as planned.

“My coach said not to do any surprises like this again,” said Leonova, “but I came here with this goal in mind. I thought that I would do a flip-toeloop, even though I did not do it a single time in practice and he (coach) did not tell me to do it. I thought he was not expecting it from me and it turned out he really didn’t. Now I have to work on it as I have to do it in the Grand Prix anyway.”

This season, Leonova has set the usual goals for herself—skating clean programs and doing the maximum, including the triple flip-triple toe and double Axel-triple toe combinations in the free.

“I think with this array I can count on high placements in the Grand Prix,” she noted.

The Russian has been selected for Skate Canada and NHK Trophy, both of which are her favorite events.