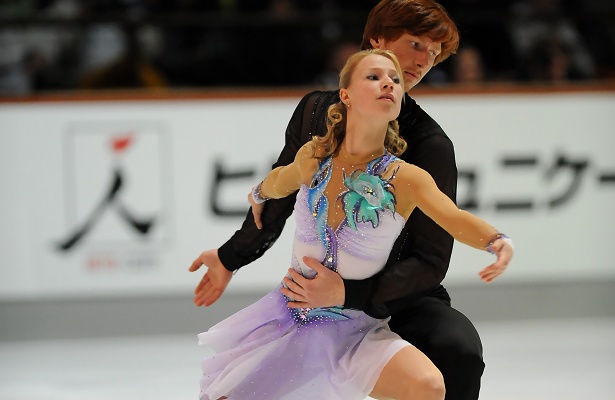 Evgenia Tarasova and Vladimir Morozov of Russia perform at the 2014 Nebelhorn Trophy gala.

World Junior silver medalists Evgenia Tarasova and Vladimir Morozov of Russia are looking forward to making an impact on the senior level this season, and they are coming well-prepared.

“When we talked about new programs at the end of the season, Nina Mikhailovna (Mozer, head coach) said that Maxim Trankov wanted to try himself as choreographer,” offered Tarasova. “We said yes right away, that we were all for it, and we started in the summer.”

“The free skating music we had quickly, but we searched for the music for the short program for a long time,” said Morozov. “We had many versions that Zhenia liked, but I didn’t. There were also version that we liked, but Max didn’t.”

The team eventually agreed on “Sarabande Suite (Aeternae)” performed by Globus, and the team enjoyed working with Trankov as a choreographer.

“It was interesting. First of all, he was always helping and gave some advice during practice,” said Tarasova. “It was not weird, on the contrary, that Maxim Trankov himself suggested doing the programs. Not everybody gets this chance.”

Following the past season, the Russians changed coaches and are no longer working with Stanislav Morozov (no relation to Vladimir Morozov). Stanislav Morozov had been their main coach since they were paired in 2012.

“We had disagreements and we decided to go separate ways,” Tarasova commented.

“Our characters didn’t match, plus he got another pair, and the French team (Vanessa James/Morgan Cipres) came to him, and he has juniors,” added Morozov. “It didn’t happen for any one single reason.”

Andrei Hekalo, who has been on their coaching team in the past, became their main coach. In September, Szolkowy officially became a coach in Nina Mozer’s school as well, and works with the young pair.

“We are very pleased that Robin has joined us,” said Morozov. “He is a high class expert and will help us in the future. He already has made a few corrections and we’ll continue to develop together. He is a positive person and we feel comfortable training with him.”

Tarasova was a promising single skater from Kazan and competed at the ISU Junior Grand Prix in 2008, however, she dreamed of becoming a pair skater.

“I skated singles until I was 14 years old, but then I said, ‘that’s it, I want to do pairs,'” shared the 19-year-old. “I really like pair skating. I have always enjoyed watching pairs at competitions, and I begged and begged until I finally I got there.”

She moved to Moscow and started training in Nina Mozer’s school with her first partner, Egor Chudin.

Morozov switched to pairs on his singles coach’s advice.

“My body build is more suitable for pairs than for singles and I am quite tall,” said the 21-year-old, who is nearly 6-feet and 2-inches tall. “Obviously, I had my doubts at first, but I quite like pair skating. You still have the jumps plus the lifts.”

“It won’t be boring, that’s for sure,” he added with a laugh.

The redhead joined Mozer’s school as well, and had two other partners before the coaches decided he should skate with Tarasova.

The new team had a rough start into their career, as shortly after teaming up in spring 2012, Morozov broke his foot.

“We were skating for a week, then he was injured and we had to wait for three months,” recalled Tarasova.

Although she got some offers from other potential partners, she decided to wait for Morozov.

“It took me a long time to recover, then we prepared in two and a half months for our first competition as a new team,” Morozov explained, regarding the Junior Grand Prix in Zagreb, where they finished fifth.

Both skaters are excited about competing at the senior level.

“It is definitely more interesting than in juniors, because there are more difficult elements and you need more variation,” noted Tarasova.

“It was getting easy for us to skate in juniors,” added Morozov. “The content was much easier than now, of course. In seniors, there is a third lift (in the free skating), then the jumps, last year we did a sequence and now we do a combination. The rules for the side-by-side and the pair spins are more difficult. The rules are changing year by year, and you cannot skate the same way.”

As a result, Morozov admits that they feel they just need a bit of time to adjust. The main goal for this season is to establish themselves in the senior ranks.

“We want to be remembered by the judges and the audience that we exist and will fight,” said Morozov.

Tarasova and Morozov get along very well on and off the ice, and are a couple off the ice as well. However, Tarasova admits that it is sometimes difficult to separate private life and work. Morozov describes his partner as “the best girl, easygoing, good natured, sweet, and amicable,” while she said about him: “He is very nice, sometimes too nice, and sometimes on the contrary he is strict and he always gets what he wants. When he wants something, he achieves it.”

The team, who is not related to the famous coaches Tatiana Tarasova and Nikolai Morozov, are scheduled to compete at the Grand Prix events Skate Canada and Rostelecom Cup in Moscow.