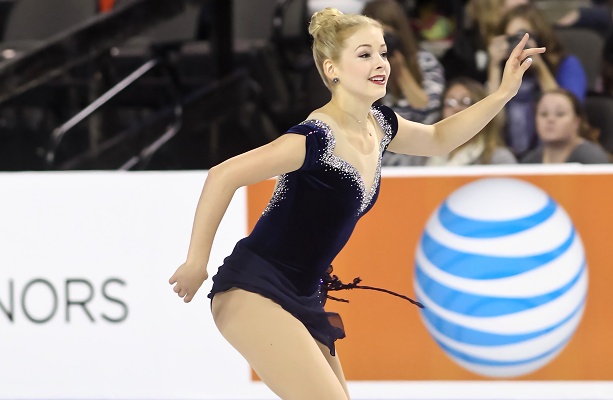 USA’s Gracie Gold won the bronze medal in her first Grand Prix event of the season at 2014 Skate America in Chicago, Ill., Sunday afternoon. The US national champion placed third in both the short and long program behind Russians Elena Radionova and Elizaveta Tuktamysheva in her first outing at this event.

In the short program, the skater completed a triple loop, double Axel and two level-four spins, but two-footed the triple Lutz-triple toe combination and fell out of her combination spin.

“It wasn’t my best performance, but I am still very happy with it,” said the 19-year-old. “It is tough to skate last after two wonderful competitors. In a competition like this, I can’t give any points away and make mistakes like I did on my spin and the small error on the triple toe landing.”

Gold nailed a triple Lutz-triple toe and three more triple jumps to pick up 118.57 points in her long program, finishing third and overall (179.38).

“I was able to get the bronze medal at this Grand Prix, which I’m happy with,” said the skater, who placed fifth at worlds last year. “There were some mistakes in this program that I need to improve on for NHK and the competitions to come, but I think it was a good start to my season. In previous seasons, I’ve also started with a silver or bronze medal on the Grand Prix circuit, so I’m looking forward to another medal at NHK before I take on 2015.”

Although the main front-runner coming into the event, Gold did not feel any added pressure, claiming the only stress she feels is what she puts on herself.

“It’s definitely exciting being the top and representing a big country like the U.S.,” she said. “I think it just gives me confidence. I feel really good coming into this season, and I still feel pretty new to the scene. I have another four years, if not more, and I feel really good about the possibilities.”

Gold won bronze at Nebelhorn earlier this fall, placing third in the short program and second in the long. The skater fell on her opening triple Lutz in the short, but landed a solid double Axel and triple loop-double toe.

“Nebelhorn was not my best, but still solid programs,” she noted. “Obviously, having a major error in the short program was not a great way to start the competition. I was a little bit nervous since I didn’t know what it would feel like since my last competitions were Nationals, the Olympics, and Worlds, so I felt a little unsure about myself. I still think it was a great opener to the season, especially compared to last year, like at Salt Lake City.”

The skater, who trains in El Segundo, Calif., feels that even though the practices were not good and the warmup was shaky, she was still able to put out two really good performances in Oberstdorf, Germany.

“I know that I’m ready to compete, that I’m a good skater and that I’m in the top of that group and will be in the top of other groups,” said Gold, who won bronze in the team event at the Olympics. “I just need to trust my training, take a deep breath and relax. Not every competition is the Olympic Games, and I need to relax more and have a bit more fun with competing and do what I’m trained to do.”

At Nebelhorn, the loss of points was on the technical side for the 2012 World Junior silver medalist.

Moving into the new Olympic cycle, Gold acknowledges that the biggest challenges are keeping up with the technical content and maturing as a person, as well as a skater.

“This will be my last year as a teenager and then I will be in my 20s,” she noted. “I know I will need to bring a new level of maturity to my skating. There are a lot of upcoming skaters, but as long as I keep training with Frank, I think I will be just fine.”

However, the Russians are out in full force, including 2014 Olympic champion Adelina Sotnikova, 2014 World silver medalist Yulia Lipnitskaya, and two-time World Junior Champion Elena Radionova, to name a few.

“It’s definitely a jumping game,” noted Gold. “The technical is out of control this year and there are so many hard programs. It’s a different feel, but I think that I’m ready for it and I think that I can be in the top.”

Gold noted that there will never be more than three Russians that interface per event.

“I’m not taking on all of them at one time,” she said. “I’ll definitely have to fight for it and work my butt off. They are going to bring their A game so I have to bring mine.”

The skater, who resides in Hermosa Beach, Calif., began training seriously again this past June and acknowledged that it is now at “high intensity”.

Although she has worked under the tutelage of Frank Carroll for a year, she admitted to feeling a bit daunted of the venerated coach at first.

“I love Frank and I love working with him,” said Gold. “He’s awesome! I was definitely intimidated (at first). I didn’t want to disappoint. Before, he was this mysterious figure, the legendary Frank Carroll who is stoic and has so many champions. But he’s so charming and quirky, and he can pretty much put anyone at ease. I love training with him. It’s an amazing opportunity.”

This season, the 2013 Skate Canada bronze medalist is skating to Edvard Grieg’s “Adagio” from Piano Concerto in A minor for the short program, and “Phantasia” and “Wishing You Were Somehow Here Again” from Webber’s Phantom of the Opera for the long.

“I definitely did not intend to use lyrics this year, but Lori (Nichol) had this music and had fallen in love with it,” explained Gold. “I was still unsure, but as soon as I started skating to it, I fell in love with it too. It really shocked me that Frank loved it, because I thought he wouldn’t be into the lyrics at all. He thinks it’s wonderful.”

Gold is a self-proclaimed California convert. She was born in Newton, Mass., but raised in Springfield, Missouri before moving to Springfield, Illinois. She relocated to California in 2013.

“I definitely love California!” she said. “I’m a beach girl. I hate cold weather, I hate snow, and I hate rain, but there is something about the Chicago suburbs that will always be a part of me. I’ve lived in the Midwest for such a long time and I won’t forget my Chicago roots.”

Gold is currently scoping out different colleges in the California area, and is taking a hard look at UCLA or Loyola Marymount University.

“I definitely want to take some classes starting in January or early summer, and then maybe a course load next fall.”

The skater will compete again later next month at 2014 NHK Trophy in Osaka, Japan.