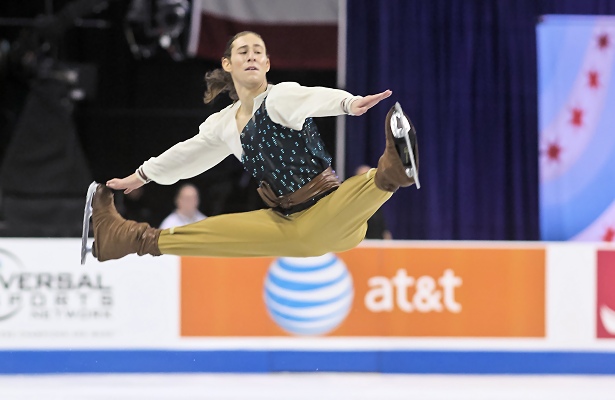 USA’s Jason Brown captured silver in his first Grand Prix of the season at 2014 Skate America in Chicago, Ill., last night. The 19-year-old is on his second Grand Prix season as a senior, finished fifth at this event last year.

The 2014 U.S. national silver medalist had to overcome a rough start in his short program when he fell on his opening triple Axel, but rallied back to land a triple flip-triple toe, triple Lutz and three level-four spins, earning 79.75 points.

“I wish I would have had a better start,” said Brown, “but I am really happy with the way I recovered. I really made sure to get every point with the rest of what I did. In that sense, I’m really happy that I kept the integrity of the program.”

In the long, Brown landed a triple Axel, a triple Lutz-single loop-triple Salchow sequence and level-four spins and footwork, but he missed the second triple Axel. He finished third in the free skate with 154.42 points, and with an overall score of 234.17 points, maintained second place to win the silver.

“I did fall, but it’s all part of that growing experience,” he said. “I had a few slips after that, but I was fighting through the whole thing and I wasn’t going to let that stop me. I’m really excited about that recovery, and it makes me that much more excited about the growth to come with the program.”

It hasn’t escaped Brown, whose hometown of Highland Park, Ill., is just north of Chicago, that there has never been a senior level competition in the “Windy City” in the past. He really never sought an answer and just accepted it.

“I was always curious why there hasn’t been (one),” he said, during a teleconference. “Growing up, Gracie Gold was in the town over…and Megan Hyatt (2006 US Junior National Champion). It was very thick at regionals and sectionals. So many people were doing triples and it was an amazing influence. Hopefully, Skate America will bring that back to Chicago.”

Coming off the Olympic season, training has been going well for the skater, who made the move in May 2013 (along with coach, Kori Ade) to train in Monument, Colo.

The two-time World Junior medalist credits “pacing” as being one of the major keys to his success last season.

“Like ‘at event’ pacing,” he explained. “I was so focused on being at the top of my game every second at every event, whether I was on or off the ice. I think that was something that was very draining and something that I didn’t really understand at that point being a first year senior.”

“It was really about learning how to pace myself better and know when to be on and really make total use of that down time,” he said. “I think that is something I really learned. Going to the Olympics and having an event for the first time that was longer than one week was a learning experience.”

Brown had a good start to the season after he won gold at 2014 Nebelhorn Trophy in Oberstdorf, Germany, earlier last month.

“Coming back from Germany was my first international win as a senior and I’m really excited to start off the Grand Prix season in Chicago at Skate America in my home state,” he said. “I felt like a sponge last year, so now I can drain out and see what works and what doesn’t.”

“It’s really, really cool!” he said, regarding the high marks he received so early in the season. “I work skating skills every day. I work on transitions and every single component mark every single day for hours. I’m really working on the technical mark as well, and trying to integrate it into becoming a really full-rounded skater.”

The jubilant skater found it rewarding as he feels he has so much more left to give in the program.

Although he won both the short and long program in Nebelhorn, Brown got called on several underrotated jumps from the panel in the long program, including his opening triple Axel.

“I try not to give it any negative thought, because I do clean jumps every day,” he said. “I know how to do a clean jump. It definitely gives me that excitement in that I left so many points on the table. It’s all about the improvement and it’s so early in the season. At the beginning of the year, you just want to put out a program and hope that it does well and as the year goes on, just developing that program. I look at it in a positive light.”

Brown did not take any time off after the Olympics, and dove right back into training in preparation for this season.

“We’ve really pushed through,” he said. “There have been some days where I really felt a little tired, but I honestly feel great and I literally look at this point in the season right now like, ‘look how far I’ve come from last year’s Skate America!'”

This season, Brown is skating to “Juke” by Little Walters for the short program, and “Tristan and Iseult” by Maxime Rodriguez for the long. Both routines, which are a contrast from last season, were choreographed by Rohene Ward.

“It was all my choreographer and coach,” said the 2014 Nebelhorn Trophy champion, regarding the different direction they moved in. “They are always trying to push me outside my comfort zone, always pushing my limits. Whenever I’m getting comfortable with a certain piece, or feel like I’m finally getting in a groove with them, they’re like ‘Oh, we’re changing it, we’re changing it up!’ Classical one year, Riverdance the next…I think that’s what really happened this year.”

“I think that’s always been their goal,” he continued, “to never have me feel comfortable in programs at the beginning of the year. They’re always trying to push me outside of my comfort zone. Never doing something that’s comfortable for me and really trying to grow me as a skater in that way. So that’s really how that approach happened this year. It’s like, ‘OK, what is the next genre of music we’re going to do? What is the next character you can play? We’re totally going to switch it up on you, and you have to learn a whole new style.'”

Brown admits that it took a bit of time to get accustomed to the new themes, but that having the music three weeks after the Olympics was helpful.

“It definitely was a process,” he said. “I’m starting right now to really gel in the style, understanding the pacing and the breathing, and how to emote in the right ways. It’s taken a few months, but hopefully it will just keep developing from here.”

The 2010 U.S. national junior champion is also working hard on the quad.

“We set aside a quad session every day and it’s going great!” he said. “I’m really excited about its progression and I’m looking forward to at adding it to my repertoire soon.”

Brown generally tends to be straight-forward when stating his goals, for example, making the World team.

“My goal when I get to an event is to always do the best that I can, and when I go out, hopefully that result ends in a medal or making whatever team I’m going for,” he explained. “I think goal-setting is good when thinking about how you want to pace and where you want to peak during the season.”

For Brown, this season will be about peaking at Worlds.

“That’s where I want to do the best,” he said. “I think having that in the back of your mind and being honest with yourself is really important, at least for my progression.”

Brown is currently scheduled to compete next in three weeks at the 2014 Rostelecom Cup in Moscow, Russia.