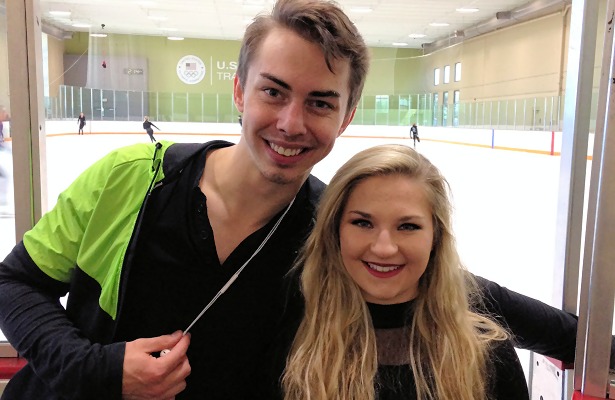 USA’s Kaitlin Budd and Matthew Blackmer have rejoined forces after four years and are excited about tackling their first season as seniors together.

“Kaitlin and I both agree that we’ve grown up so much since we last took the ice together,” said Blackmer. “There’s a maturity and a passion that wasn’t there when we were younger. We’ve discovered how to truly relate to one another and how to keep training fun.”

The pair skaters competed together from 2007 to 2010, winning a US bronze medal in the intermediate level, before parting ways.

“We felt like we needed time apart to grow and realize our own personal goals in skating,” explained Blackmer.

Both Budd and Blackmer had a successful run with their previous partners. Budd and Nikita Cheban won the 2013 U.S. Novice silver medal, while Blackmer and Britney Simpson  were the 2013 U.S. Junior Champions.

“After we both split with our partners from last season, we had some really insightful discussions and came to the realization that our goals, personalities, and maturities were aligned,” said Budd.

The skaters reunited last April for a tryout under the watchful eye of Coach Dalilah Sappenfield, and after two days, decided to make it official.

“The tryouts were phenomenal,” said 18-year-old Budd. “We were both so excited by our technical ability and our comfortable connection. We both believe this comes from knowing each other since we were young and learning the foundation of our pair skating abilities together when we were kids.”

“Kaitlin and Matt have a great connection,” said Sappenfield. “They seemed to have easily picked up from where they left off. They have a lot of potential and I’m excited and looking forward to seeing their growth as a team.”

After several trips back and forth from their hometown of Detroit and their training base in Colorado, Budd relocated to Colorado in June, and the skaters began training full time.

Over the past two months, the skaters’ work ethic has become much more focused and they are very open and direct about their goals.

“Obviously there is a huge technical increase and we are extremely excited to show off our potential,” said Blackmer. “Time apart has made us both better skaters as we have had time to develop our own skating skills, movement, and technical ability.”

“We also both learned how to train and compete more efficiently,” added Budd. “We’re partners in every sense of the word and really know how to work together to accomplish our goals. We are very excited to be competing together again!”

Along with Sappenfield, the skaters are also working with Eddie Shipstad on jumps, Janet Champion on spins, John Coughlin on lifts, and Drew Meekins on skating qualities and choreography.

Their goals for this season are to have a solid showing at sectionals and nationals.

“We really just want to get our feet wet and get as much experience as possible,” said Budd. “Representing our country in international competition is the ultimate goal.”

Budd and Blackmer, who are working on three new lifts, have an explosive quality to almost all aspects of their skating.

“Our one-foot height difference really helps with all of the trickier elements and definitely allows Kait to soar on our throws,” said Blackmer.

The skaters debuted their new programs, both choreographed by Sappenfield, last week at the Colorado Championships. The short is to “The Way We Were,” while the long is to selections from the Black Swan soundtrack.

“We really want to showcase how Kaitlin and I have completely reinvented ourselves,” said 22-year-old Blackmer, regarding the long progam. “Our skating abilities and the transformation that happens in the movie is a great vehicle for what we’d like to translate on the ice.”

“The Colorado Championships was a very exciting event for us,” said Budd. “The short went well and the long proved challenging, but we accomplished our goals.”

The team is currently training and preparing for Midwestern sectionals, which will take place later next month in Geneva, Ill.

“We have a lot of work to do till then, but all we need is time,” said Blackmer. “We feel like as a team we have an incredible amount of potential and longevity. We just need more time to really gel as a team.”

“We really want to build a lasting career and impression as a team,” added Budd. “Our goals for right now include just to train incredibly hard and really embrace the process we have to to through to become successful.”